Has RWA Lost Its Way?

Many readers have been busy with celebrations for various holidays this week and many more do not spend much time on Twitter, so some may have missed the news that dropped on December 23, 2019. To get started, I would recommend checking out this thread of tweets from Alyssa Cole. Here Cole lets the public know that RWA (Romance Writers of America) has taken action to suspend author Courtney Milan as a result of an alleged ethics violation. Even with many people getting ready to take breaks for their holidays, this news had an instant ripple effect. Clearly RWA underestimated the ability of romance authors and readers to multitask.

So, what happened? Well, back in August Courtney Milan tweeted about a 1999 novel by Kathryn Lynn Davis which contained what she and many others would describe as fairly egregious stereotyping, and she called the book out as problematic and racist. So, why did it matter that a twenty year old book was called racist?  Well, Davis had recently been hired as an editor by Glenfinnan Publishing, a company owned  by one Suzan Tisdale, and presumably these folks did not appreciate having the word “racist” associated with someone at the business. Tisdale  and Davis responded by each filing ethics complaints against Courtney Milan. Suzan Tisdale’s complaint is here and Davis’ is linked here. The complaints contain several screenshots and Ms. Tisdale submitted more, which can be found here.

Now this is where things start to go off the rails, so hold on. I know I’m throwing up a lot of links here, but it really is worth readers’ time to go check these out. I can summarize everything, but nothing can replace seeing the actual documents or seeing members of the romance community describing events in their own words.

Getting back to Twitter – author Leslie Kelly (a former RWA President) has a great explanation of how ethics complaints are supposed to be handled and it’s very instructive in terms of seeing what went awry in this case. Normally, when an ethics complaint comes in, the Executive Committee (President, Pres-Elect, Treasurer and Secretary) review the complaint and decide if it should go to the Ethics Committee. 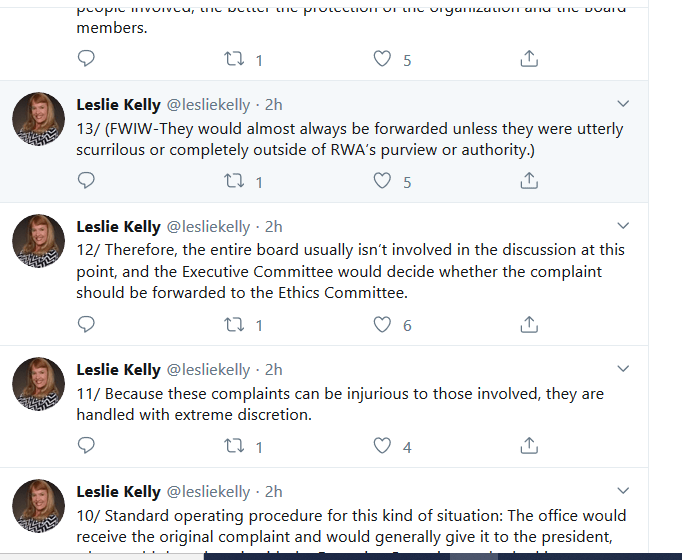 Now, at the time these particular complaints were filed, Courtney Milan was the chair of the ethics committee of RWA. Did she get a chance to recuse so that the investigation could go forward? No. It has come out that she was reportedly told to resign her position (which she did). Someone at RWA apparently then decided to bypass the entire ethics committee and form a second ethics committee just for the purpose of considering the Milan complaints. Oh, and the composition of that second ethics committee was  – and still is – secret. Because that doesn’t look suspicious at all.

Just as a side note, I’ll mention that in the non-Romancelandia side of my life I have served and continue to serve on a variety of nonprofit and professional boards. Most have an ethics committee, and for those that do, the identity of every committee member is not only known to the accused, it’s a matter of public record. No one has his or her case considered by an anonymous judge. Not only does the accused know who they are facing, but they know who voted which way. This is basic transparency, folks, and it’s essential to building trust in organizations.

The secret ethics committee found Ms. Milan in violation on only one(1) of the grounds of complaint brought forward by Tisdale and Davis, but they recommended that she be suspended from RWA for 1 year, be censured, and that she be banned for life from holding any national or chapter position of leadership. Supposedly this was a unanimous recommendation. However, it is still unknown how many people were on the secret alternate ethics committee nor who they are. While several members of the original ethics committee have come forward to state that they did not receive the Milan complaint, to my knowledge no one who considered these complaints has identified themselves.

As many are aware, the Board of Directors met and rescinded their vote the very next day (December 24, 2019, if you’re keeping track). So, what happened in the meantime?  Well, social media exploded just for starters. When the decision broke, members of the real ethics committee apparently learned for the first time of the existence of the super-secret alternate ethics committee that considered the complaints against Ms. Milan. 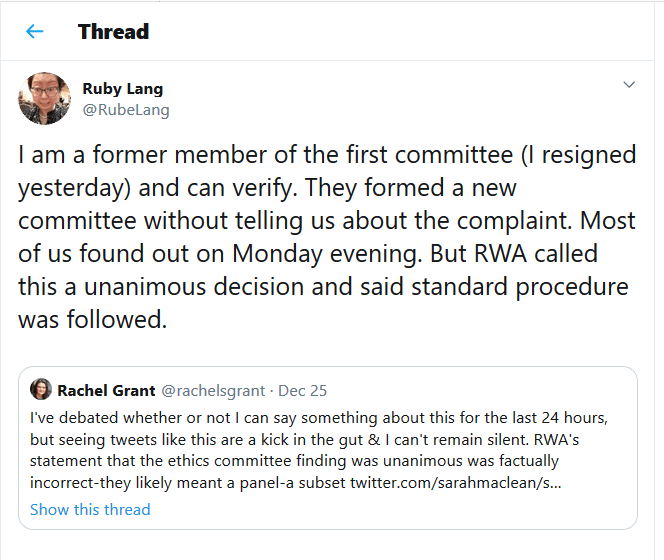 Since Courtney Milan has been an outspoken voice in favor of diversity and inclusion in an organization which has had a problematic history with regard to race, seeing her censured essentially for speaking up about racism feels like a betrayal for many of us who had hoped that RWA was working to become more inclusive. In addition, the extreme secrecy concerning how processes work, who considered this ethics complaint, and who voted which way on the Board(per former Board members, vote is to be done by roll call if not unanimous but the identities of who voted for and against the ethics committee report have been kept secret so far) have made it very difficult for authors and other members of the romance community to have any faith in what RWA has been doing behind closed doors in this situation.  Added into these concerns are accounts from various current and former RWA  members stating that the board did not have oversight of staff and that staff, not the board, at least sometimes decided which complaints got to the ethics committee. And then there is this mention of problematic behaviors from RWA past president (and lawyer!) HelenKay Dimon: 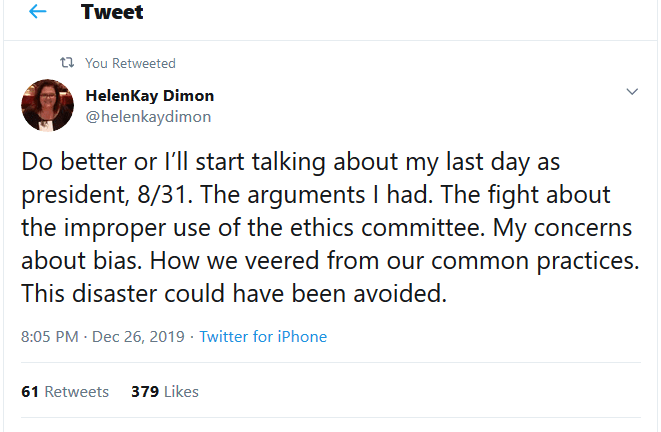 Needless to say, these actions have not been received positively by RWA members or by the romance community as a whole. On Twitter, one can find numerous tweets from authors who have pulled their work from RITA consideration and from RITA judges who are resigning. Many calls have been made for transparency and for RWA to provide a full, complete explanation of what transpired and who was involved at each point along the way. These have been met with silence. In addition, no less than 28 RWA chapter presidents have submitted a letter calling for the resignations of the President, President-Elect and Executive Director of RWA.

And it’s not just the RITA judges resigning. On December 24, Board member Chanta Reed stepped down, citing RWA’s handing of the Milan complaint as the deciding factor in her decision. On December 26, board members Priscilla Oliveras, Seressia Glass, Adrienne Mishel, Farrah Rochon, Pintip Dunn, Erica Ridley, Tracey Livesay, and Denny S. Bryce all resigned from the Board of RWA, Each issued a statement on Twitter that they “no longer trust or have confidence in RWA’s leadership.” Later on, it was confirmed by RWA that the President, Carolyn Jewel, has also resigned.The statement linked in the previous sentence is one which was sent out on December 26 by RWA. I have included that link because it does confirm Jewel’s resignation. However, the statement itself is an anonymous Google doc that I would best describe as word soup. As a professional response to an institutional meltdown, I think it fair to say that it leaves quite a bit to be desired.

The President-Elect, Damon Suede, remains as President of RWA. As a reminder, Mr. Suede is also the board member who, according to the report of the board meeting, moved for the actions of the ethics committee to be adopted. Other than that, his role in this debacle is largely unknown. Likewise, the role of RWA staff in this meltdown has been speculated upon but has not been shared with membership or readers. Given the magnitude of what has occurred, many in the romance community consider this unacceptable and rightfully so.

It’s obvious at this point that RWA screwed up. Frankly, as more information becomes available, it appears obvious that they made more than just one mistake. Their internal procedures are clearly flawed and while Courtney Milan is an author with a high enough profile to draw attention to the problems, one can only imagine how many people who are not so well-known may have been treated equally poorly by the organization. Story after story after story of alleged irregularities and bias at RWA(some going back to the early days of the organization) have been pouring out ever since this particular story broke and I can only imagine that will continue.

So, where does RWA go from here? Over the short term, I honestly think that the organization has broken trust with too many people. This isn’t a situation where they can apologize and hope we will all forget about it. Perhaps if they:

(1) clean house and start over by electing a brand new board who would then hire a new executive director;

(2) audit what has been happening not just with the complaints against Courtney Milan but with the ethics committee in general and make those findings publicly available, including the names of everyone on the shadow ethics committee, and

(3) show by their actions that RWA is willing to listen and to really do the work of becoming more diverse, inclusive and anti-racist, then over the long term they may survive.

However, RWA has damaged its reputation with a significant portion of its membership and with the romance community at large, and one can understand those of us who will be slow to risk trusting it again. There are lots of questions to be answered here, and from what is already known, it is apparent that once those questions are answered, the organization will have to change if it is to survive. 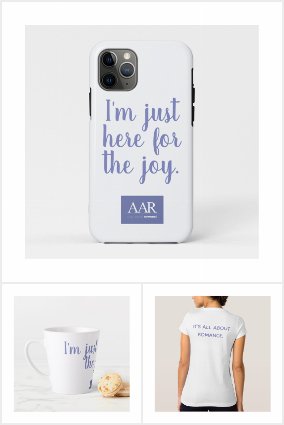