How a People-Pleaser Found Her Voice By Kristen Granata (and a giveaway!)

I first started writing Collision while sitting on my couch in a sling just after shoulder surgery. I had not turned thirty yet, and in addition to the excruciating shoulder pain, I was experiencing unhappiness in another area of my life – my marriage. My very good friend, Dorthy, sent me some books to read to keep myself from going stir-crazy. As I read them, I imagined what it would be like to know a man like the love interest in any of those books. I held a pity party for myself, and felt saddened to think that those fictional men don’t exist in real life. (If they did exist, I would have met at least one, right?!) I decided that if I couldn’t find the kind of man I longed for – I would write him into existence.

I began confiding in my physical therapist, whom I spent countless hours a week with. I complained about having to cook dinner every night, and clean the house, all while in a sling because he refused to help. I complained about how he would get angry if I stayed out “too late” to see my best friend who had just given birth to her first baby. I complained about how he wasn’t very nice to my family. I even complained about how he picked out all of the Christmas decorations for our new home, and wouldn’t let me get any of the lights that I liked. My PT listened, and asked one question: “Why do you let him?” I got very defensive, at first, and explained that it was obvious I had no choice in any of those matters – he was in charge, and I was stuck doing what he said. Moreover, he had a temper. I had seen coffee tables fly across the room, and holes punched in the wall during arguments whenever I had tried to speak up. Again she asked, “Why do you let him be in charge? What would happen if you told him that you weren’t cooking dinner tonight?” I laughed, knowing very well that I “could not” say that. “You can,” she replied. “You just choose not to because you’re afraid.”

The more I thought about our conversation, the more I began to understand. It was as if she had taken a blindfold off my eyes that had been there for twenty-nine years, and I was suddenly able to see everything so clearly. I was unhappy in my situation, but the only person to blame was myself. Everything that had happened to me was everything that I had allowed to happen. I was a people-pleaser. I always had been. I remained stuck in my marriage because I was scared; I didn’t speak up for myself because I was scared; I didn’t try to change anything because I was scared. Fear had taken the wheel, and I had quietly slid into the passenger seat.

It was an uphill battle for over a year, but in the end, I was able to learn how to stand up for myself. With the help of family and friends (and my trusted physical therapist) I got a divorce and left my meeker self behind. Learning how to use my voice, and to love myself, was the hardest thing I have ever done. I even took a break from writing Collision during that time. My head and my heart just weren’t in it.

When I finally returned to writing, I began by re-reading the chapters I had once written. It was like reading a stranger’s words. I was a different person then, and I did not like the way the story was being told. I revamped the entire thing, and spent the next two years writing the version that is published today.

I’d like to think that going through my difficult time has led me to create something that can help other people out of their difficult times. Collision has some dark undertones throughout it, and the main character goes through quite a struggle to find herself. I wanted a main character who was troubled and messy, because that’s realistic – we’ve all got issues. Some people have said that the male protagonist is too cliché, and I get that. But that’s the best part about writing fiction. You can write the happy endings, and you can create the perfect guys, if that’s what you’re into. It won’t appeal to everyone, but there isn’t one piece of writing that does. And as a reformed people-pleaser, I’m happy to say… I chose to write what I wanted.

I’d love to hear from anyone who has gone through a similar situation, or who has overcome something difficult. Please feel free to reach out to me and share your story! Comment below, go to my website, or find me on social media. And, all those who comment will be entered into a drawing for a copy in whatever format you read of Collision. I’m giving away two at AAR! 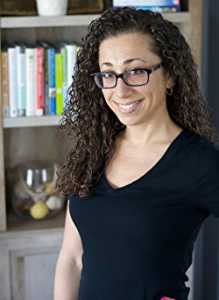 So glad I read a little bit about you and would love to read your book. Just knowing other people go through similar things helps. I’m going through such a hard time right now. Everyone keeps saying it will get better but so far it hasn’t.

What an inspiring story. I admire your courage and determination and wish you every success in your writing and life. Let us hope that your writing helps other women take charge of their lives.

Thank you so much – that’s what I hope for anyone struggling who reads this. If I can do it, anyone can! E-mail me if you’d like a free copy of Collision: [email protected]

This sounds like me only I’m in my 50’s. This is my second marriage hoping to find prince charming and live happily ever after. Romance novels are like hallmark movies, fairy tales. I love a good love story but it would be nice to read about real life.

I commend you on trying again after your first marriage – it’s so scary to jump back in the water when you’ve seen it fail the first time! Collision has a super real-life story going on, but with the romancey feel that everyone loves.. e-mail me if you’re interested in a free copy! [email protected]

You have an amazing amount of courage, my dear! Keep on your journey❤️❤️❤️

Wow, does this hit home. I am losing an employee, and at first I was sad, but now I can’t wait until he’s gone and I can get someone who actually does the job. Because of who the person was (someone known to me, someone connected in my organization), and because of my own rampant people-pleasing, I never expected him to do the entire job, instead doing the more menial tasks myself. And I was his boss! It has been quite eye-opening to see the extent of what people-pleasing can do. I, too, need to find my voice, and now. The first step is admitting how you feel. And then the harder part!

I always said – I could never be a boss, because of how bad my people-pleasing is! I give you tons of credit! It’s SO hard to say simple words that seem to roll off other peoples’ tongues (and it makes you feel like crap – why can’t I just say the words?!) It used to feel like someone was holding my throat, because I wanted to say them so badly, but couldn’t choke them out. It DOES get easier with time – it takes a lot of practice, as silly as it sounds.

Trish, I’d love to send you a free copy of Collision! Please let me know which format you prefer: [email protected]

What an inspirational story. A young family member is going through something a bit similar and I hope she can find the strength to do whatever needs to be done.

I hope so, too! Maybe reading either my story or Collision could help her find strength? It is so difficult!

Sally, I’d love to send you a free copy of Collision! Please let me know which format you prefer: [email protected]

Love love love this and am so inspired by your dignity and strength. Xox You go girl!

Thanks so much! xo