In Love with Digital People: A Guest Post by Sandra Schwab

Art vs. Artist: Sandra and some of her digital creations

Thank you, AAR, for inviting me to talk a little bit about my process of creating covers with digital models! My digital adventures started in December 2014, and I entirely blame Twitter for the whole thing.

After all, it was on Twitter that friends talked me into writing a historical romance set in ancient Rome. Please note this is what happens when you mention on social media that you live near a reconstructed Roman auxiliary fort at the Upper Germanic Limes: your friends think you’re super-qualified to write Roman romance, and because you don’t want to disappoint them, you buy oodles of new research books and—oh, well, stock photography for the cover.

Have you ever tried to find stock photography for a historical romance set in ancient Rome?

Let me tell you, it wasn’t pretty.

And for me, this rather frustrating search proved to be the tipping point. There had to be an alternative to photographic covers! I had always liked the more traditional painted covers, but I knew to attempt anything like that would far exceed my own sketching abilities. But by some lucky accident, I one day stumbled across a reference to 3D rendering and working with digital models—and I was hooked. 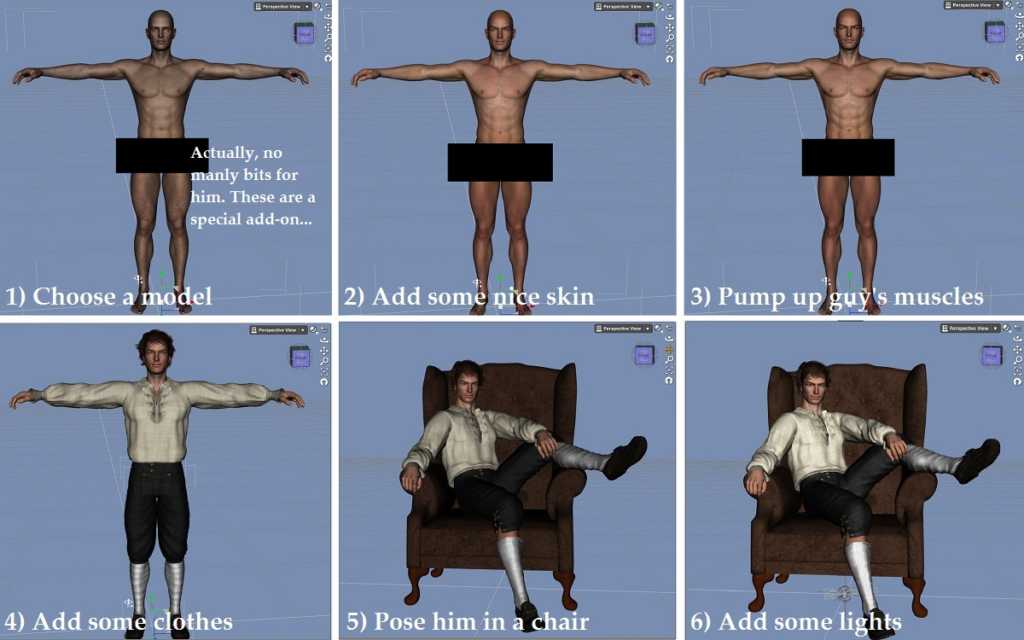 Working with a digital model

There are various different programs for 3D art on the market. The common principle of all of them is that within the program you set up a scene of digital models, add some lights, and a camera (unless your computer doesn’t like the camera and shuts down the program when you attempt to use a camera; in that case don’t add a camera). When everything is set up to your satisfaction, you press a pretty button, and—voilà!—within a couple of minutes (or hours) (or, indeed, days), the software puts together a pretty 2D picture of your scene for you.

Does anybody need a zombie?

Well, let’s just say, using these programs isn’t quite as easy as it appears at first glance. Apart from creating zombie people in the early days of my adventures in 3D, I once accidentally turned a male model’s skin into green brocade (with a pretty golden pattern). Not quite the effect I was aiming for… Indeed, it took me almost a whole year of learning the ropes of the software before I came up with something I considered good enough to actually put on a cover. Yet all this work came with a rich reward: creating digital art fires up my creativity.

The first step of creating a new cover image is always to pick a model and start sculpting the features and body. During this early stage, when I fiddle with skins and eyes, I tend to feel decidedly Dr. Frankenstein-ish (“Best $3.50 I’ve ever spent on eyes!!!” is something I once actually tweeted). By now, I’ve learned to boldly delve into the depths of the software to improve the structure and hue of a skin (let me tell you, a greenish tinge doesn’t look good on anybody!). To make matters a bit more difficult, the look of a digital skin changes depending on the light you use. In addition, when you’re working with more than one model, it can be tricky A) to find skin tones that look good together (you probably don’t want one model to look orange and the other grey) and B) to pick a set of lights that works well with both skins.

Trying out different models, skins, poses, and lights for the cover of Castle of the Wolf

Skins and lights are not the only tricky areas when dealing with digital models—posing is another one.  After all, you want to achieve a natural-looking pose without anybody’s fingers melting into a chest or any other such delightful thing (which, of course, you only notice after the software has spent one or two hours putting together a 2D picture of your model). Very often small changes can vastly improve a pose—in many cases, hands or fingers need adjustments to make a pose look less wooden and less artificial. It takes some experience to figure out which bones you need to move in what way to achieve the desired effect (and not to dislocate one of your model’s limbs).

Moreover, small changes in a pose can have big effects in regard to the overall look of a model: it all depends on the pose whether the figure looks determined or hesitant, grumpy or creepy, tender or about to sink their teeth into the other model’s neck. Just compare the two test images I made for the cover of Bewitched:

Posing: What a difference an arm can make

On the left, the model is holding her right arm very close to her body, which lends her a contained, almost worried look. On the right (and yes, I was once again playing with eyes here…), I lifted her elbow, so the whole arm is pulled out from her body, and adjusted the positioning of her finger against her lips. Much better, isn’t it? She looks much stronger now and also a bit mischievous—just perfect for the heroine of this novel.

As you can see from the test pictures for Bewitched and Castle of the Wolf, I worked on the model first before adding a background. This is something I prefer for cover art because it allows me to first focus on the most important part of the cover art—the model(s)—before testing different backgrounds. Once I’ve picked a background, I typically go back to make adjustments to the model’s hair and clothes in order to achieve a better blend of foreground and background.

For other projects, however, it might be more convenient to place the model in a digital environment from the get-go, as I did with an image I created for Gaelen Foley for a blogpost about medieval minstrels. On the one hand, the image was supposed to evoke the romance connoted with minstrels; on the other, I also wanted to experiment with lighting and perspective. Again, I did a variety of test pictures to see which composition and camera angle (yes indeed! for this project, my computer even let me add a camera!!!) would work best. And how about adding a dog? Or perhaps a different landscape? Or a different kind of sunlight? 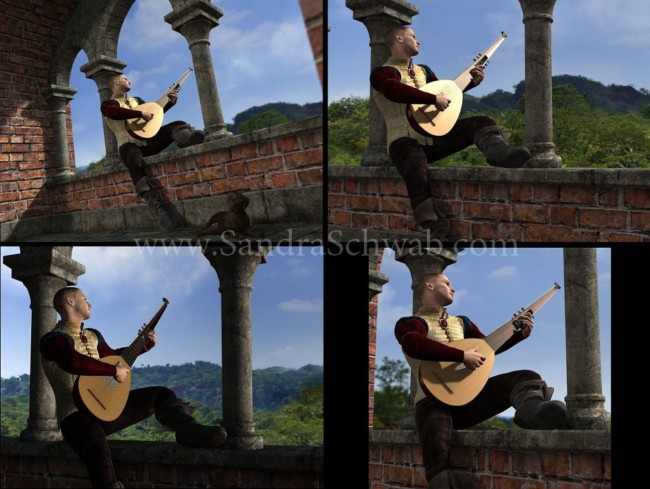 Having fun with a minstrel

And finally, when everything is assembled and looks pretty, the very last step of a project is always the postwork. (Will you be terribly horrified when I admit that I don’t use Photoshop, but a variety of different programs that came free with various different computers over the years?) At its most basic, postwork means to adjust the brightness and contrast of a picture and add some shading to make the text on a cover stand out more. But lately, I’ve also begun to add layers of color and other effects. For regular cover art, the changes tend to be quite subtle and are designed to enhance the overall look of the image. Here’s what I did for the cover of Wicked Seductions, from final test picture to adjusted cover art to final cover after postwork and the addition of text.

Improving a picture in postwork

In most cases, the overall process tends to be a lengthy one and can take anything between a couple of hours and a couple of days. (And sometimes you just want to sit down and cry because your computer is acting up and your software keeps crashing, and even after checking your scene for the umpteenth time, the fifth test render reveals that your heroine’s pinkie is partly disappearing into your hero’s arm, which in turn is attempting to melt into his chest. Oh, and the collar of the heroine’s dress is floating above her skin.) But as with all creative endeavors, seeing the finished result of my work never fails to fill me with a rush of giddy excitement.

Sandra Schwab is an author, artist, and translator. She earned a PhD in English literature with a study on the history of dragonslaying, and she now uses some of her fiction to shamelessly fangirl over Punch, her favorite Victorian magazine. She appeared on the BBC documentary Great Continental Railway Journeys to talk about the Grimms’ fairy tales (while walking through a rather muddy stretch of the Black Forest) (there were a lot of slugs too).

Sandra lives in Frankfurt am Main, Germany, with a sketchbook, a sewing machine, and an ever-expanding library. You can find her online at www.sandraschwab.com, and if you’d like to hire her to put digital people on your covers, she would love to hear from you.

If you’d rather armchair-travel to the Black Forest instead (minus the slugs), check out her latest (re)release, Castle of the Wolf, originally published in 2007 and now available again on Amazon, Apple, Barnes & Noble, and Kobo.

Wow, Sandra you have more patience than I do. I have a strong desire to try this out for no reason, just to play :) Your book covers are so lovely,though. Well done for surviving Michael Portillo and the other slugs ;)

BJ, I might yell at my computer monitor from time to time. Especially when it’s the fifth render of the same scene and it’s only afterwards that I realize the trousers the model is wearing are malfunctioning…. :-) And Michael Portillo was truly lovely – as was the small film crew. :-)

Great post, Sandra! I’ve been so curious about how you do these covers –love this “insider glimpse” into your process!! Thanks for sharing.

Thank you, Gail! I’m glad you enjoyed the post!

Really cool process. Thanks for sharing.

This was fascinating! Thank you so much for sharing. You mentioned paying for eyes. Do you pay to add various new body part designs?

Thank you, Linnie Gayl! You can buy different kinds of base figures and characters for these base figures. Plus hair, clothes, jewellery, furniture, houses, landscapes, what not. Characters typically come with a skin, eyes, and face and body morphs. However, I tend to prefer shaping faces and bodies myself (which you can do within the software). Some vendors also sell specific body parts like noses or those eyes I mentioned. And those eyes are truly fantastic because they look very realistic. When you’re working with older characters or characters that were made for a different software, the eyes that come with the character often look rather flat and dead. But eyes are important – if they look dead, your figure will look dead (Hello, zombie-people!). So to stumble across a set of eyes with great reflections and great colors? BEST. THING. EVER!!! (And I totally sound like Dr. Frankenstein again…. *g*)

Thanks! That all makes sense. It sounds like a really interesting process.