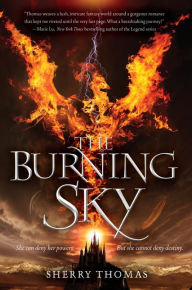 The 2016 RITA awards were announced last week, and now it’s time to get a little nostalgic for this month’s TBR Challenge. In years past, I’ve gone all the way back to the first awards handed out in 1982 to read my pick. However, this time around, I went with something much more recent – The Burning Sky by Sherry Thomas, nominee for a 2014 RITA in the paranormal romance category. Though it didn’t win that year, this book is a wonderful read.

Most readers probably recognize Thomas as an author of superb historicals.  This novel, set in an alternate world that intersects somewhat with 1880s England, marks her first foray into YA. I enjoyed the characters and the world created for them, and this book would definitely go on my DIK shelf.

Our heroine, Iolanthe Seabourne, is of a type that anyone who reads a lot of paranormal (YA or adult) will recognize.  She is that special snowflake deemed the most talented of her generation. Of course, she doesn’t initially have a clue about her stupendous powers; they never do. It’s rather like those awkward historical heroines who are drop dead gorgeous but can’t understand why men fall all over themselves to catch a glimpse.

Even if she comes from a familiar subset of heroines, I liked Iolanthe. I liked her hero, Prince Titus, too. The story opens in a mysterious, magical land referred to as the Domain. Iolanthe lives in the Domain with her guardian, and she knows that she is an elemental mage. However, she has no idea just how gifted she is. An incident that occurs when she is conjuring a simple lighting of the path for an acquaintance’s wedding brings Iolanthe to the attention of Atlantis, the dictatorial tyrants who have dominated and oppressed the Domain for generations.

Iolanthe, with the help of her guardian, narrowly escapes capture. Through a series of machinations, she finds herself in Victorian London, on the run with Titus. Though nominally Prince of the Domain, Titus has little power as his realm is completely under the thumb of Atlantis, whose spies lurk everywhere. The powers that be have parked Titus in school at Eton, a non-magical place where he is unlikely to learn much that would allow him to cause trouble – or so they think.

Titus, knowing Iolanthe has the power to someday help free the Domain from tyranny, conceals her at Eton as a fellow student. Much of the book focuses on Iolanthe alternating between hiding her true identity and meeting in secret with Titus to hone her skills for coming battles.

Titus is initially something of a jerk, particularly to Iolanthe, but he grew on me over time. Truly a tortured hero, he knows of visions that show him dying along the way to bringing Iolanthe to her true destiny – and yet he has the guts to do what must be done to save the Domain anyway. As Iolanthe and Titus work together, they start to fall for each other, too.  It’s a very sweet story, set against a dark world – and I lapped up every page of it.

The action does rush a bit much toward the end, and we do find ourselves faced with a somewhat uncertain ending (this book is 1st in a trilogy, after all). However, it’s still an unforgettable read and one deserving of a wide audience. If you’re looking to jump into a new battle of good vs. evil, The Burning Sky is a good one to try.  Grade: A-
Sensuality: Kisses 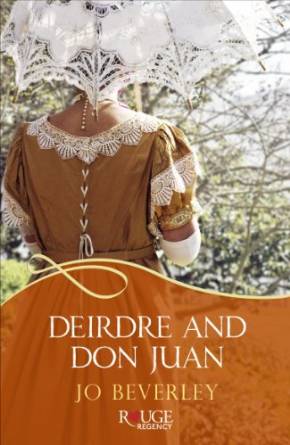 July is RITA month for the TBR Challenge, and I always enjoy going through their lists of past winners to see which ones I’ve got on my TBR pile. Fortunately, I always find a few, so I’m set for a few more years yet (!), and this year it seemed fitting to go for a title by Jo Beverley, whose name – not surprisingly – appears on the list of winners several times.

Deirdre and Don Juan (available only in the Lords and Ladies set in the USA) won the RITA for Best Regency Romance in 1994, and is an utterly delightful take on the “rake-meets-plain-jane” trope, in which both hero and heroine have some growing up to do. The gorgeous, charming and very rakish Mark Juan Carlos Renfrew, Earl of Everdon, is widely known throughout society as Don Juan for his half-Spanish heritage as well as his way with the ladies. Although his wife ran off with another man a decade earlier, and after just six months of marriage, he didn’t seek a divorce because his status as a married man meant that he was safe from the matchmaking mamas on the marriage mart.

However, he has been recently widowed and decides to marry again before his new-found freedom becomes known throughout society at large and makes him a target for every eligible young lady in the ton. When his mother – half-jokingly – suggests her somewhat mousy friend, Lady Deirdre Stowe as a possible wife, Everdon actually thinks it’s a good idea. Deirdre is plain and quiet, just the sort of woman he wants; she’ll be only too glad to land a rich, handsome husband, give him his heir and spare, and live quietly in the country while he gets on with his life in London. It’s the perfect solution.

Lady Deirdre has other ideas, however. For one thing, Everdon is a rake and not at all the sort of man who would make a good husband, and for another, she is in love with someone else, a man of genius, a mathematician named Howard Dunstable who is going to Do Great Things. She has visions of her life with him in a pretty cottage, he working on his complex mathematics while she caters to his every whim, embroiders and eventually, she hopes, looks after the children.

Her parents are not at all pleased about the idea of their daughter making a match so far beneath her, but Deirdre is stubborn and has extracted a promise from them that if she has not received a suitable proposal by the end of the season, she will be allowed to marry Howard. But with just a few weeks to go, along comes Everdon with his proposal and ruins everything. If his reputation wasn’t enough to make her dislike him, the spoke he puts in the wheel of Deirdre’s plans to marry Howard certainly are, and she wants absolutely nothing to do with him.

Unfortunately for her, Deirdre’s father has agreed to the match, which means that Everdon cannot, in all honour, call it off. (Ladies could break an engagement, gentlemen couldn’t). But Deirdre can’t cry off either, as doing so will break the terms of the agreement with her parents. When she explains the situation to Everdon he concludes that there’s only one way to end the betrothal and offers to engineer a situation whereby she will catch him in a compromising situation with another woman. In the meantime, however, they must behave like an engaged couple and be seen to spend time together.

This, of course, allows both of them time to adjust their opinions of the other. The more Everdon sees of Deirdre, the more he comes to admire her intellect, her kindness and her spirit, and to realise that she’s not plain at all. His late wife’s betrayal has made him understandably wary of emotional entanglements and lingering doubts about his own culpability in her desertion – he feels he neglected her – surface during his pursuit of Deirdre; but he doesn’t wallow and his doubts help him to realise that he wants to marry Deirdre because he loves her and not simply because she will be a convenient wife.

Deirdre refuses to be swayed by the earl’s good looks and charm, but even so, she can’t help comparing the way he treats her – as though he actually sees her and is interested in her for herself rather than what she can do for him – with the way Howard practically ignores her. Everdon makes her feel beautiful and desired for the first time in her life, while her would-be fiancé is dismissive or takes her for granted. She is perhaps a little too stubborn in her refusal to admit that Howard is completely wrong for her, but I can understand her difficulty; she’s been so set on marrying him for so long that to admit her mistake to herself is one thing, but to admit it to others is incredibly difficult and somewhat lowering.

There is a small, but well-realised cast of secondary characters, such as Everdon’s mother and his odd but strangely insightful cousin Kevin, otherwise known as the Daffodil Dandy because of his predilection for the colour yellow. Deirdre’s young scamps of brothers are fun, and her mother, who makes up for what she lacks in fashion sense in her good common sense, clearly wants the best for her daughter in spite of her propensity to dress her in far too many ruffles and flounces.

This is a fairly short novel (217 pages according to Amazon), and I flew through it in one or two sittings, I enjoyed it that much. It’s a “kisses only” sensuality rating, but the air crackles between the couple from the start, and Jo Beverley builds the romantic tension between them so well that their looks, touches and eventual kisses are wonderfully sensual. There’s a real warmth to the family dynamics and a lovely, understated humour; all of which combine to make Deirdre and Don Juan a truly charming traditional Regency.

I enjoy spending as much time as I can between the covers of a book, traveling through time and around the world. When I'm not having adventures with fictional characters, I'm an attorney in Virginia and I love just hanging out with my husband, little man, and the cat who rules our house.

How fun – both are books I haven’t read or had on my radar. They are now! Great job Lynn and Caz. :)

Glad to get books out of my TBR and add to someone else’s. ;)

I love Sherri Thomas but never considered reading her YA series. Well, until today. When I bought all 3.

You’ll love it – the second book is my favourite but the entire trilogy is superb.

I’m a huge fan of Jo Beverley’s: her medieval, her Regency trads, her original Mallorens, and her original Rogues. Among her trads, Deirdre and Don Juan hold a special spot. It’s great to see others enjoying it, too. Have you read her other trads?