A Love Letter to Romancelandia 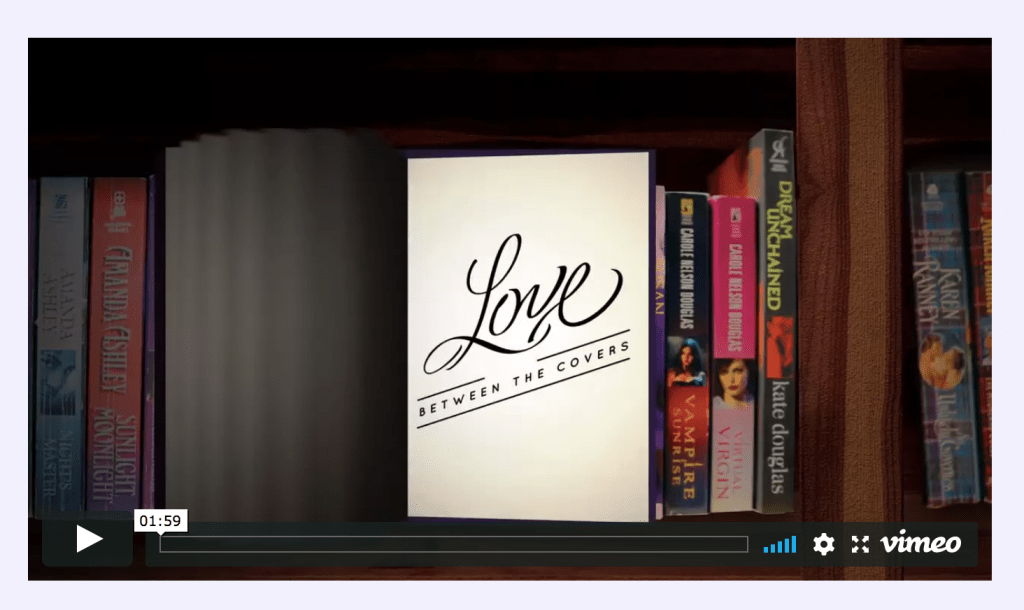 I’m a lover of documentaries and of the Romance genre, so when buzz started on Twitter that the film Love Between the Covers was available to stream through Amazon, Netflix, and iTunes I had to watch it right away. Love Between the Covers follows five published authors (Beverly Jenkins, Eloisa James, Radclyffe, Susan Donovan, and Celeste Bradley) as well as one aspiring author for three years as they navigate the ins and outs of the Romance world. (Here’s the trailer.)

For those already immersed in Romance, as so many AAR readers are, much of the content of the documentary won’t be new to you. The Romance genre sells big numbers, it is fueled by women who write for women, and the books are as diverse and interesting as the women who are involved in it. I think that the film is really intended for those outside of the Romance community who will be surprised to hear that, yes, women are paying their bills writing romance, and yes, romance means more than formulaic stories, and yes, people really and truly care about these books.

The film opens with the line “This is a story about pride and also a story about prejudice.” For all the things that Love Between the Covers discusses, it is at its heart about those two issues. There is still prejudice against the romance community for so many reasons. Romance novels have been denigrated as housewife porn, bodice rippers, trashy, and what have you. Some criticize the genre for the required Happily Ever After, but as Beverley Jenkins puts it, “It’s a fantasy yes, but so are Arnold Schwarzenegger movies. Arnold never dies at the end of his movies.” The documentary tackles these notions with defenses that aren’t new to those of us who have been reading in the genre for years. “Romance fiction is sold in 34 languages on six continents, and the genre grosses more than a billion dollars a year – outselling mystery, sci-fi, and fantasy combined.” (Love Between the Covers Press Kit). Sales of romance novels help fuel the entire publishing industry, or as Susan Donovan states, “We pay the bills for all of fiction.” Romance readers helped to further the growth of eBooks and romance writers have been forerunners in the realm of self publishing. Still, that does not seem to be enough for some to show respect to the genre. We can all think of several recent articles about romance from big name publications that seem to think we’re lucky they deigned to notice us. It’s rare to see anyone well-informed or respectful writing about the genre in a mainstream publication. And we all can think of plenty of off-handed sneers towards romance in pop culture. But where there is prejudice towards the romance genre, the documentary shows that there is so much more reason to have pride.

Besides everything I just listed, the documentary focuses on how inclusive the romance industry is. There are stories out there of every ilk, or as Smart Bitches, Trashy Books Sarah Wendell says “Whatever your cup of tea, someone’s pouring.” Nearly every genre, heat level, and subject matter is covered in modern romance. The genre is also expanding to include authors and stories beyond middle class white women. Some of the strongest scenes in the film are around Beverly Jenkins and her desire to bring African American history to romance. The scenes of her discussing the history of slavery on a sightseeing tour with other women of color completely touched my heart. Jenkins has been revolutionary in making a place for African American heroines in Romance fiction. There are also interviews with Len Bardot (pename Radclyffe), who found a sense of belonging through lesbian fiction. She is shown speaking at a lesbian fiction conference and inspiring other writers to tell their own stories. As we’re reminded, the women coming to Romance to read and write are straight, queer, black, white, able, disabled, fat, thin, doctors, lawyers, mothers, and every other incarnation of women you can imagine. As the genre grows, there are more and more seats at the table for women who want to create happy endings that mirror their own lives and interests, and plenty of books for the women who want to read stories that reflect themselves. Celeste Bradley and Susan Donovan formed a friendship over writing romance that sustained them through bad marriages, bad health, and unhappy times. That is the beauty of the romance genre. There is something for everyone, and everyone gets a happy ending.

There is no question as to why (uninformed) people look down on Romance. “Romance is sneered at because it’s written by women, it’s written for women, and it’s written about women” (Jane Austen Scholar, Sarah Lyons). People have tried to paint Romance fiction as frivolous or silly, but Love Between The Covers does an excellent job of showing the power that comes from women working together, reading together, writing together, and generally forming a sense of community and understanding around a subject. The filmmakers approach this through everything from a look at Jane Austen to visiting a Romance Writers of America conference, but the key point is always women empowering other women. I could go on about how much I enjoyed this film (which I have now watched three times since its initial release), but mostly I want to encourage you to watch it for yourself. It is a documentary about an industry, but more than that,  it felt to me like a love letter to Romancelandia that, as a happy citizen of that world, I was overjoyed to see.

I’ll leave you with a final word from Beverly Jenkins about the Romance genre, because she puts it better than I could.

I would love to hear from anyone else who has watched the documentary. It was released over a year ago, so I hope some of you have seen it. Let me know what you thought. If you haven’t watched it yet, it is free on Netflix or available to rent on Amazon and Itunes.

Definitely gonna catch this when i can!

I watched it today and loved it! I’m trying to watch 52 films directed by women this year and this one was fit the criteria and was a lot of fun. I remember when it came out, but didn’t know it was on Netflix. Thanks for sharing the info.

I’m definitely going to check this out on Netflix as it seems right up my alley. Thanks for the recommendation!