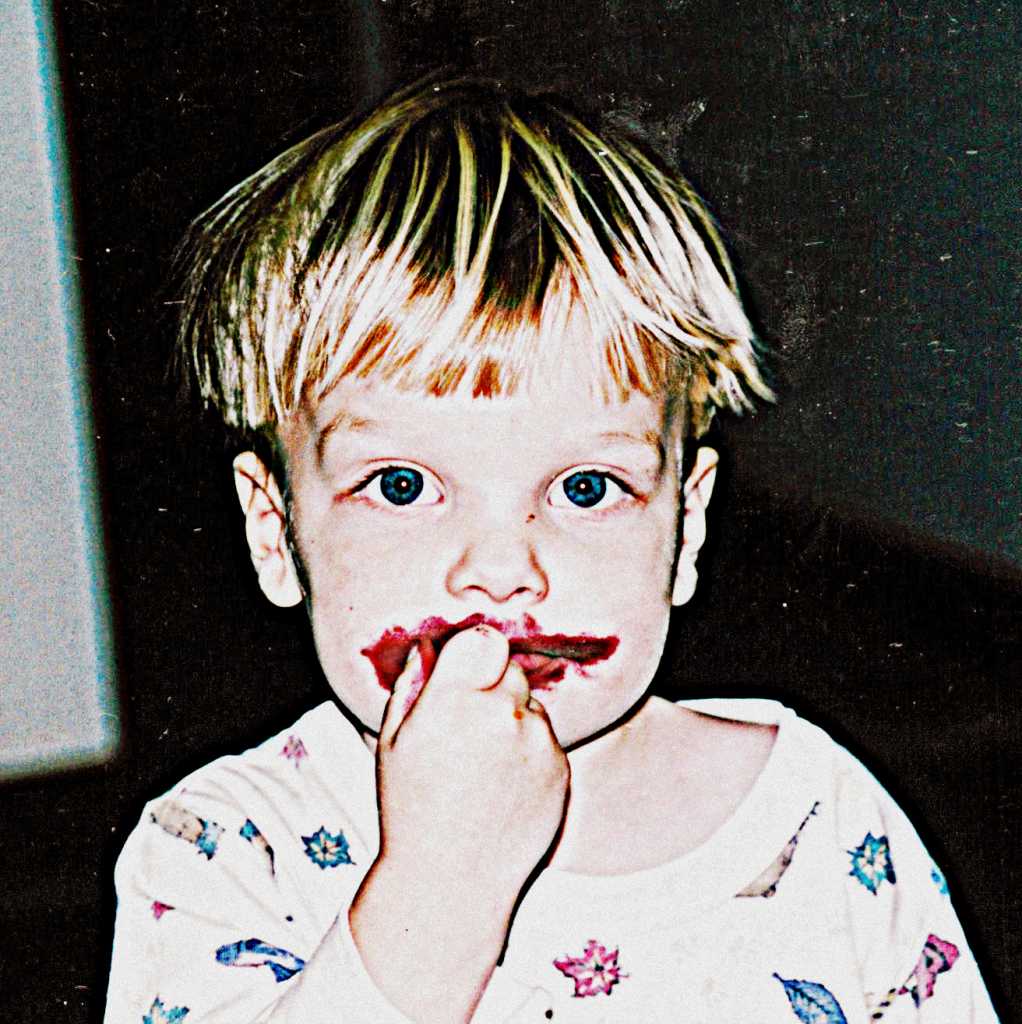 why yes that is red lipstick on me… and on the white carpet in our rented beach house….

Babies are often romanticized (so to speak) in romances, which tend to focus on pregnancy and only show us infants in glowing sunlit epilogues or cheerful cameos in sequels which focus on family and friends. It’s a rare book that throws you into the teeth of sleepless, unshowered, spit-up-encrusted life with a newborn – probably because, let’s be real, it’s hard to have enough energy for the relationships you have, let alone a new one.

Oddly enough, the most realistic portrayal of an infant I’ve read in a romance is in a young adult book, The Boy Most Likely To by Huntley Fitzpatrick.

This review has spoilers in it for this book, and definitely spoilers for the first book in the series (My Life Next Door), so proceed with caution.

The hero Tim is a human trainwreck (classmates completed that sentence with phrases like “drive his car into a house” or “find the liquor cabinet blindfolded.”) After his parents kick him out, Tim moves in with his best friend and begins falling in love with the friend’s sister, Alice, when a girl from his partying days turns up – with a newborn. This frazzled, miserable girl and the shell-shocked Tim react differently to the baby Calvin, as Tim starts to love him while the mother talks adoption. Throughout it all, Fitzpatrick (herself a mother of six) is graphically honest about what it takes to raise an infant.

Caring for Cal is exhausting, and he doesn’t just cry or need a bottle at moments when the author needs something to interrupt the protagonists. Tim freaks out when Cal poops so far up his back it goes into his hat. The mother breaks down sobbing about the stitches she had to have post-delivery. I’ve never heard a romance novel mention vaginal tearing before.

But just like real life, it’s not all a horrorshow. Cal refuses to keep socks on. Tim notices the little roll of baby chub at the base of his neck, like his head hasn’t grown into itself yet. And sometimes, the worst moments lead to the best ones:

Blue eyes so red, he looks like he needs an exorcism, deep painful breaths, knees yanked up hard to his chest. It’s bum-crack of morning, Cal’s miserable, and I have no clue how to fix him… My ears hurt so bad and I want so damn much to put him down and go into another room, shut the door. Go outside, onto the lawn, down the street, to the beach. I mean – no one’s ever died from crying, right? Maybe he’ll just wear himself out?

So. I don’t leave. The least I can do. I just keep on holding him while he thrashes around like a hammerhead on a line…

Pick him up and put him on my stomach, hold tight to his tense, flailing body. He collapses, sweaty, all his damp red waves flopped down, instead of sticking straight up as usual. After a long while, as though it’s taken time to collect his strength, he raises his big heavy head back up and looks me straight in the eyes.

Then, like his smile has taken all his energy, he slumps his head to the side, grabs a handful of my chest hair, snorts loudly, and tumbles off to sleep.

What about you? Have you read any romances where the infants were real, and so was the depiction of trying to care for them? Do you have any favorites? Alternately, do you have any hall of shame infant stories, where the mothers always glow and babies always sleep unless there’s a makeout session to interrupt?

Jill Barnett’s “Wishing” has three main child characters with personalities and goals and feelings of their own. They’re my favorite example of well-written kids in a romance.

…And by “Wishing” I meant “Imagine”. Though Wishing is also a great story!

I finally finished reading both My Life Next Door and The Boy Most Likely To. Thank you so much for pointing these books out (which is just one of the reasons I continue to be a daily bonafide AAR lurker- hmm, sounds like a good button slogan!) I loved both books but The Boy Most Likely To is one of my favorite reads this year. Huntley Fitzpatrick’s characterizations are wonderful – babies, young children (I loved George!), tweens, teenagers and adults. Thank you for pointing out this gem of a book, and this “new to me” author.

I’m so glad you read and loved them! This is the kind of comment that keeps me going as a volunteer reviewer!

There are some really excellent suggestions here . . . can’t wait to check them out. On the truly horrible side of infant depictions, I thought Stephanie Meyer’s last vampire book (which included not only a perfect child, but adults that stepped in at every moment to provide totally unrealistic resources to the young parents) was an unconscionable disservice to Meyer’s generally very young readers.

Woof, everything about Renesme in Twilight is a royal mess. That, her quick-growing so Edward and Bella Don’t Really Have to Parent Her For Long, EVERYTHING with the creepy as fuck Jacob shit.

Emma Chase’s Sustained has a very realistic depiction, I thought, of children ranging in age from baby to teenager. The heroine ends up taking care of her brothers brood after he and his wife pass away unexpectedly. There’s a scene where they all come down with the stomach flu. It’s priceless.

That is SUCH a necessary story!

Sometimes it amazes me I had more children.

I am very impressed you had more children after your first. And did it with grace.

I got pregnant again when the eldest was seven months old. Then, three and a half years later I had twins. There’s a decade of my life that’s kinda blurry!

In Sarina Bowen’s recent release Bountiful, the heroine has a 15 month old toddler whom she is still breast feeding. There are scenes that encompass the reality of that, plus just dealing with a child that age in general. It smacks of realism to anyone who has had kids, I think it’s one of the better and more accurate child/parent interaction books that I’ve read.

I love Murphy’s Child by Judith Duncan, because of the picture of early parenthood. It just takes me back to those frazzled days.
The hero and heroine have split up at the before the book begins, and the first scene is the heroine coming to tell the hero that she is pregnant.
The baby, when it arrives, has colic, which brings the hero and heroine together: she needs his help to cope. The mix of her needing him, his reliability, her exhaustion, and the old issues that becoming a mother raise for her combine to confront them both with the reasons they broke up in the first place.

I’ve never had a baby with colic, so I don’t know how well that part is written; but the breast-feeding descriptions are just spot-on and brilliant. I love it when her milk comes in – because mine came in the same way – when she leaks, when she’s engorged, when she needs to look nice and has a melt-down because of the wet patches on her top – it’s all so accurate, and to do that in the context of a series romance, and weave it all in so that it’s relevant to the story – it’s just a brilliant book.

(And the unshowered bit you mention: it’s in there too. There’s a scene where the hero is cooking for the past-herself-with-tiredness heroine, and trying to work out the most tactful way to suggest she could shower while the meal is cooking.)

Colic is the DEVIL. I had a relative whose baby had colic, and when I told an older woman who had her baby in the 1950s, she literally started crying. “They don’t have a cure for that yet?” she asked. My relative opined that if men were responsible for babies, they probably would have demanded a cure!

My first son screamed from three months to nine months. It was so difficult. My husband worked 60 hours a week and I didn’t have any family in the area. I used to put my kid in a stroller and just walk round and round at the nearest mall just to keep from being at home with just him and his yelling. We still call him the bad baby by which all bad babies are judged.

I agree with Dabney and Maggie. Your blog makes me want to read this book. I try to avoid children in books, because they tend to be plot moppets, either overly precocious or overly saccharine.

I love this piece. Babies are so hard and far too often romance presents them as tiny bundles of beaming joy. This blog makes me want to read this book!

I was just thinking the same thing – this blog makes me want to read the book! My favorite book about children done right is Hunter’s Moon by Karen Robards. In that book Molly is raising her brothers and sisters ranging in age from 12 to 17 and the book shows kids who have all kinds of problems and Molly struggling to keep it together.

While I love and wholeheartedly recommend this book, it is chock full of serious spoilers for the first in the series, My Life Next Door. That one is excellent too (I gave it a DIK here) so I suggest reading both!