A (not grumpy) guest post and a giveaway by Nicole Helm 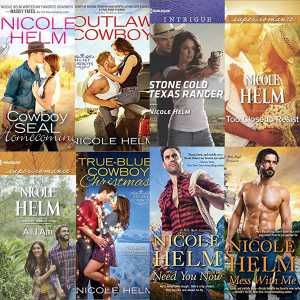 I’m a tell me everything kind of girl. When I say grumpy heroes are my jam, I mean both as writer and reader. I mean as card-carrying romance aficionado and an entertainment consuming human being. I don’t know why anyone is debating Jess vs. Logan when LUKE exists, and if your book/TV show/movie has a grumpy man felled by any kind of woman, I want to know about it.

Why? Well, I’m not sure I can put all the appeal of the grumpy hero into tangible categories, but I don’t mind trying. The grumpy hero is usually grumpy for deep reasons. He’s the lion with the thorn in his paw, and in a romance we get to see someone come along and remove it. But it isn’t just pain a good grumpy hero is hiding away, he’s usually protecting something of a soft heart—and therein lies the appeal. The contrast between the rough exterior and softer interior, the complexity in how he exists with both, and the hope someone can come along and tend the wounds and heal that heart.

A grumpy hero is often in desperate need of some care-taking, and my favorite romances are where the couple learns how to care for one another, how to get under all the walls the other person has put up to make that care count. It’s all about exploring how to change and grow with one another, and how that changes their life for the better. It’s about intimacy and it’s about healing. This is a most especially difficult task when the hero is of the grumpy sort. He has all sorts of walls, and the grumpiness is usually only the first one.

There are, of course, different types of grumpy heroes. They’re scarred by different things: loss, difficult childhoods, war, and so on. Their grumpiness manifests itself in different ways. There’s some overlap certainly, but in crafting quite a few grumpy heroes, I’ve found mine tend to fall into three different categories

The Hermit: He’s shut himself away completely from the world, or at least the people who mean the most to him. He probably thinks he’s not fit for human interaction. His scars are deep. He’s no shit creek survivor because he is mired in that creek. There’s wallowing, maybe some self-loathing, or there would be if he said much. This grumpy hero doesn’t want anything to do with anyone, even though that’s desperately what he needs. He doesn’t think he’s worthy, but in falling in love he finds or rediscovers his worth, and in finding that worth, readers are treated to an uplifting journey.

The Controller: The controller grump is pretty functional. He’s not quick with a joke, but he probably interacts with people pretty frequently. If he has friends, they probably knew him before. The controller is grumpy because he thinks the way to avoid loss or pain is to control everything. And then something enters his life he can’t control, and his grumpiness intensifies. Nothing is going right, he can’t keep the pain or scars at bay, and suddenly he has to deal with them. He doesn’t want to for even a second, but he often finds a very surprising thing in the midst of this loss of control: love and the giving/receiving of it makes the healing not as scary as he might have thought.

The Shit Creek Survivor: This grump has probably been to hell and back, but he’s not the type to shut himself away and wallow. Usually because he has some other responsibilities which keep him a little grounded (grumpy widower, anyone?). Still, because he has to exist in the world, he tends to be overprotective. He’s constantly poised for the world to deal him another blow, so he’s ever diligent. It’s not a particular fun existence, and he tends to take it out on those who are just that: fun. What this grump usually needs is an application confusion, cheerfulness and whimsy. And as those things slowly brighten up his rather dark humor, this grump usually finds that surviving is even better with love.

In the end, the appeal of the grumpy hero exists in what that grumpiness hides. The pain, the soft underbelly, and in falling in love with someone, in opening oneself up to another person and dealing with the pain, fear, or scars. The beauty of a grumpy hero is his journey is one of change, hope, and redemption. In his happily ever after, he’s probably still a little gruff and grumpy, but it’s no longer in an attempt to hide or protect. He’s found some happiness, some wholeness, and a few things not to be so grumpy about.

What’s better than that?

(I’d like to add, pretty much everything here goes for grumpy heroines as well, who are also my jam, for all the same reasons).

Tell me about your favorite grumpy heroes, or another grump hero category, in the comments and I’ll choose one winner for a Nicole Helm Grumpy Hero Grab Bag of signed print copies of Need You Now (Controller Grump), All I Am (Hermit Grump) and True-Blue Cowboy Christmas (Shit Creek Survivor Grump).

In return, I’ll share some of my favorite grumpy heroes (separated out between the ones I’ve written and the one’s I’ve read). Since I tend to be a very contemporary-based reader, I crowd-sourced some of my trusted friends for a few more recommendations to give a broader spectrum.

Alex Moncrieffe, What I Did For a Duke, Julie Anne Long (Hermit Grump)

Waking Up With a Duke, Lorraine Heath (Controller Grump)

Wes Stone, All I Am (Hermit Grump)

Support AAR--shop at our store!