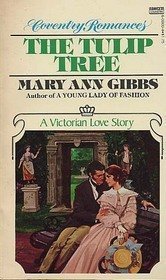 This month’s TBR Challenge is a wild card.  When told to go whereever my mood takes me, I find myself overwhelmed with choice since I have quite a sizable TBR pile these days. For this month’s read, I decided to dive into a box of old Coventry romances from the 1970s that I picked up at a library book sale. These books are trads, mostly of the Regency variety, but the line did publish a few from other time periods as well.  My pick, a 1979 release called The Tulip Tree by Mary Ann Gibbs, was one of these and is a Victorian romance set during the 1840s.

As with many of the older romances I’ve read, the heroine in this one is rather young. Allegra Lakesby is 18, and upon her father’s death, she learns that not only do she and her mother need to vacate Lakesby in order to allow her cousin to claim it as his inheritance, but her father did not run his estate well and  failed to provide much by way of resources for her and mother to live on.  The two women, along with Allegra’s Aunt Bell must simplify and downsize their lives quite a bit to adapt to their new circumstances.

With the help of the family lawyer, Allegra’s mother finds a modest home in a small town not far from Lakesby and they move in. It’s obvious from the beginning of the book that Allegra will have some growing up to do.  Well, either that or she’s shaping up to be one of the more insufferable heroines out there.  She understandably chafes at the reduced circumstances of her new life, but her constant pining over houses with large rooms does get a bit old. In addition, while the naivete that guides her into the predicament that sets up the main story is understandable, it’s also annoying.

You see, Allegra is somehow convinced that taking work as a governess will somehow gain her entrance into these grand houses (and by extension, grand society) that she misses and for which she longs.  So, even though her family would prefer she stay home as young women did during this period, Allegra insists on answering an ad for a governess. Her insistence on going out to work in the face of everyone’s warnings comes off as immature rather than brave or even feminist for her time, primarily because of Allegra’s own tone. She often sounds more like a defiant child than confident adult.

However, she has her way and ends up being engaged to serve as governess to the younger sister of the Earl of Featherstone. On the way to her new position, she finds herself  on the train with William Buckhurst, a railway engineer. They pass an enjoyable trip together, though Mr. Buckhurst’s warnings about what she may expect as a governess do prove prescient. Upon arrival at Featherstone, Allegra does indeed face something that she seems not to have expected – life as a servant.

That’s right. Somewhere in Allegra’s immature imaginings, it didn’t occur to her that working as a governess meant occupying an uncomfortable position where she would not be fully accepted by either servants or family. When I saw that she was surprised to be separated from the family and placed in a rather spartan room, I was a bit incredulous.  Allegra grew up as the daughter of a country gentleman, so one would think she would know how governesses were treated.

Even with these eyeroll-inducing moments at the beginning, I did find myself enjoying this book, though. Part of this lies in the character development.  Allegra grows up quite a bit over the course of the story. By the end, she’s actually more sensible and a great deal more likable than in the beginning and I liked seeing her journey to get to that point. The cast of characters at Featherstone made for entertaining reading as well, from Allegra’s charge to the scheming dowager Lady Featherstone to the overly entitled young Lord Featherstone – who has plenty of growing up to do himself.

I don’t normally go for love triangle stories, but the interplay between Allegra, Lord Featherstone and the engineer William Buckhurst did capture me.  I think since this was not a terribly angst-ridden story I could enjoy the romantic intrigues a bit more because one gets the feeling that whoever does not win Allegra’s heart will probably find the right match for him and end up happily anyway.

While some of the obsession over class in this story(and some of the overt classism) gets wearing at times, it did feel true to the period.  I did appreciate the amount of historical background that the author packed into this relative short little book.  Since the story is set in the 1840s, the expansion of the railroad in England plays a large role in the story and details such as the many railway schemes, risky investments and various maneuvers by landowners to either attract or repel railroads to their land all weave in and out of the story.  These are interesting details in themselves, but also helped keep the book firmly anchored in time and place.

Overall, this was an interesting little read even though it did have its annoying aspects. Grade: B, Sensuality – Kisses

I’ve been a fan of Alyssa Everett since I read Ruined by Rumor a few years back, and have eagerly snapped up everything she has written since. For some reason, though, An Heir of Uncertainty has languished on my TBR pile, so I decided to make September my “rescue a languishing book” month!

Colonel Winstead Vaughan is surprised to learn that he has inherited an earldom following the very unexpected death of the young Earl of Radbourne, a distant cousin. Win’s own estate of Hamble Grange is in financial difficulties, and things are looking bleak; he had to remove his younger brother from Cambridge because he could not afford the fees and, looking years ahead, doesn’t know how he will provide a suitable dowry for his five-year-old daughter when the time comes. So while he is naturally sorry to hear of a young life tragically ended, he can’t help feeling just a bit relieved that his financial problems appear to have been solved.

Summoned to Yorkshire by the estate’s solicitors, Win undertakes the arduous journey from Hampshire accompanied by Julia and his brother, Freddie, only to find upon arrival that the situation is not as he had been informed. It appears that the young earl’s wife of three months is pregnant, and that the earldom is now in abeyance until she has the baby. Win is naturally a bit disgruntled at having travelled all that way with a fractious five-year-old and incessantly chattering nineteen-year-old when he might not stand to inherit after all, and immediately decides to return home to wait out the months until the birth.

Lina, Lady Radbourne had not realised she was expecting at the time she was notified of the death of her husband, but by the time she did realise, it was too late, and the estate’s trustees had already summoned the ‘new earl’. Not wanting to create any more awkwardness, she moves to the dower house with her sister, so that Win – who is still the heir presumptive – can stay at Belryth Abbey. Lina and Win are naturally a little apprehensive around each other, but when, the day after his arrival, Win encounters Lina on a walk and escorts her home to discover that the dower house has been broken into, he decides that perhaps he should stick around for a while for a rest before undertaking the 250 mile journey home – and to make sure the necessary repairs are taken care of. Over the next few days, a series of other seeming “accidents” – poisoned tea, a dead dog, and then a ‘trip’ into the path of a moving carriage – directed at Lina and her unborn baby suggest that someone is deliberately trying to harm her, and Win is the obvious suspect. After all, he has most to gain should her child not be born. But even in the few short days they have known each other, Lina has learned that Win is a man to be trusted. And more than that, she can’t stop thinking about him, the strength of the attraction she feels startling and quite new. Lina had been very fond of her husband, but had married him out of friendship and a desire for security for herself and her younger sister rather than because of any romantic attachment.

Win is similarly smitten with Lina, and is puzzled by the fact that nobody in the area has a good word to say about her. Before he meets her, the estate’s trustees talk about her as if she is a jezebel, a woman of extremely lax morals whose baby is likely not even her late husband’s. On meeting her, he wonders if they were talking about the same woman, because Lina is decorous and ladylike as well as being lovely.

I’m not going to reveal whodunit – or who tried to do it – but the author keeps the plot twisting and turning right up until the end, throwing in a few extra and very plausible suspects along the way -and the reveal, when it comes, is suitably shocking. The romance between Win and Lina, while it takes place over just a few days, is nonetheless fully developed, and the sexual tension between them crackles whenever they’re in scenes together.

But the thing that elevates this book into more than ‘just’ an historical mystery is the richness of the characterisation and the sense of community Ms. Everett has created around this small Yorkshire village. All the secondary characters are superbly drawn, from the lovelorn doctor to the grumpy local magistrate, and her depiction of Win’s brother, Freddie, is superb. Today, we’d recognise him as being on the autistic spectrum, but back then, of course, he would have just been regarded as rather odd, what with his obsession with pigeons, his forthright and literal honesty and his utter lack of guile. Freddie is wonderfully endearing and it’s obvious that the brothers would do anything for each other. Win and Lina are fully-rounded characters with more than a bit of emotional baggage which trips them both up at key moments; the circumstances of Win’s unhappy marriage make it difficult for him to fully consider a future with Lina, and Lina is wary of making her mother’s mistakes. Both of them need to come to terms with their pasts so they can move forward into the future together, and their eventual realisations about what is really important is handled well.

An Heir of Uncertainty is a book I can heartily recommend. Alyssa Everett gets the balance between romance and whodunit just right; and while perhaps the ending is a little too neatly tied up, it doesn’t spoil what is a thoroughly engrossing and entertaining read.

I agree that it’s more accurate and I do appreciate it when characters show at least some consciousness of class. In this book, it was pretty much an obsession at times, though, and the heroine seemed both obsessed by and yet oddly naive about class divisions.

“While some of the obsession over class in this story(and some of the overt classism) gets wearing at times, it did feel true to the period.”

I’d like to see a little more of that in historical romance these days. It might not be pretty, but it’s a helluva lot more accurate than all those benevolent aristocrats who are friends with their servants we’re getting these days. I saw someone point out recently: not even Elizabeth Bennet seemed to know her servants’ names!