So you like romance novels. Have you considered video games? 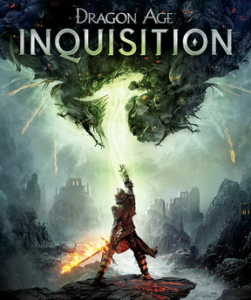 I see your eyebrow cocked at me, I do. But hear me out?

Once upon a time (namely five years ago) I was a video game skeptic. I did not play them, was intimidated by them, and had no interest in playing them. Then I met this boy who was adorable and lovely and wonderful and I was falling in love with him and he made a request: could I try to play? You see, he had spent much of his professional life working on testing video games and they were a love of his. He wanted me to experience this thing he loved that he was sure I would love and since I kept dragging him to musicals, I really couldn’t deny him.

And reader, the boy was right. I do love them. Not all of them (I can’t be doing with the ones where you have to play with others, like Destiny), but the ones I love, I love hard and usually with multiple play throughs. One of my stronger loves is the RPG (role playing game) Dragon Age: Inquisition and I am here to tell you about Cullen.

The story of the game is pretty simple. There’s a giant green hole in the sky and it’s spewing demons out from it. You wake up after a gnarly dream to find a thing attached to your hand that can close the hole and the smaller holes it has made throughout the world of Thedas. You get a team (these RPG games always come with teams, y’all, and it’s one of the best parts) and you get to work closing the holes. Along the way, you solve small quests and fight dragons, collect herbs and deal with palace intrigue. It’s cathartic and engrossing and I have played this thing for hours without noticing the clock.

The best part? You can start romances with other characters. It’s like a giant interactive dating game where you also kill dragons.

You have three key advisers – Leliana, Cassandra, and Cullen – as well as an assortment of team members you unlock as the game goes on. Who you can romance depends on what kind of character you choose to play as and what gender. Just like in life, there is a broad range of sexualities in Thedas and not everyone is everyone else’s kink. In my most recent playthrough, I was a female human and I decided to make a play for Cullen. See below as to why. 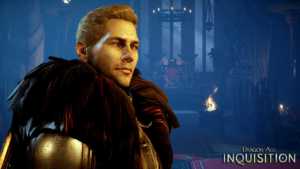 Let’s just say it went well. He was shy at first, there was some work to be done, but eventually, he confessed his love for me/my character. This confession led to quite the scene of sexy times. As I watched the scene play out, I realized this was a romance novel come to life and I got to interact with it. There was a power different than the written word. Eventually, my character saved the world (spoiler alert? I mean, it is a video game. There are tropes here, too!) and this playthrough ended with me and Cullen on the parapet of the fortress, holding each other and staring into the distance, having a conversation about how whatever the future held, we would face it together.

In other words, the game ended with a completely satisfying happily ever after. I killed an archdemon and I got the hot dude. Thank you very much, that’ll do ;)

For this game to so blatantly build romance – the build-up, the sex, and the HEA – into its world was just wonderful. It was even more wonderful that my female character retained her power in the encounter. She was leading this massive fight to save the world and in no conversation did he try to tell her what to do because they were screwing. Sure, he advised her and led the army because that was his job, but he deferred to her because that was also part of his job. And in the end? They lived happily ever after. (Well, until the next installment in the game series at least.)

I wanted to share this with you, dear AAR readers, because the control I had over this relationship was so different to reading a romance and yet contained so many of the elements we love. It was like a choose-your-own adventure romance novel and what fun it was. What about you? Are you a gamer? Have you played Dragon Age? Let’s gush!

Voracious reader, with a preference for sassy romances and happily ever afters. In a relationship with coffee, seeing whiskey on the side.

A few years ago, on a lark, I started playing Hidden Object Games — mostly the ones offered through the Big Fish website. I was surprised at how many of them offered romantic subplots. I guess I thought they were all about finding sunglasses and umbrellas in a big city. :)

They even have voice actors and cut scenes. Not to mention gorgeous graphics. There is even a Harlequin Presents hidden object game! Also, there are games like Grim Tales with lovely historical settings and costumes — and good-looking guys…

Unfortunately, I got out of HOGs because I was overwhelmed by the number of new titles. The popular series had lots of sequels, and I could no longer tell the names apart. But sometimes, a game would be abandoned. One well-reviewed game ended up with the hero falsely accused of murder and in prison, and the sequel never game out. :(

Another good one is Witcher 3. The game is smart enough to recognize if the player is trying to romance both women and they’ll call you on it. Then your Witcher gets no loving :)

I’ve always appreciated the romance options on Mass Effect. It was one of the first video games that I can remember that allowed for gay and lesbian relationships for the main character. It also let the player choose to have a romance with an alien (Female Sheppard/Garrus was my favorite pairing).

I am definitely a gamer, though my choice is probably always gonna be Skyrim. I do have some friends pushing me to try out the DragonAge series, so who knows, it may be in my future!

(One of those friends literally has a notebook where she keeps track of who she has romanced, who she hasn’t, and who’s hearts she has broken. Cause apparently there are a lot of options?)

Dragonage:origins, along with Planescape Torment, is one of my favorite games! I am off to buy this now!

I like video games, but haven’t tried this one. I’m not much of a bang bang shoot em up type of game player, but I don’t mind the turn based games. I will definitely check this out though, thanks. You said it was one of your favorites – do you have other recommendations?

It’s more of a wander-around-a-lot-and-occasionally-slash-folks-with-your-sword game, so you may enjoy it. I have also loved the whole Bioshock franchise – especially Infinite – but they are a touch violent, so that may not be your bag. Have you played Fable? Or any of the Lego ones?

I am not a gamer and can’t imagine I ever will be but I do get the appeal of being able to influence the course of a romance. It happens all the time that a book starts off with an intriguing and potentially very romantic premise and then the author takes the characters in a direction that is totally not what I would have chosen, with the result that I feel deflated or fed up and lose interest in the book. I so wish I could take the wheel sometimes!

That’s exactly why I wanted to share this aspect with AAR – the taking the wheel is so lovely! The game only allows so many options, of course, but it’s still more than we get on the page.