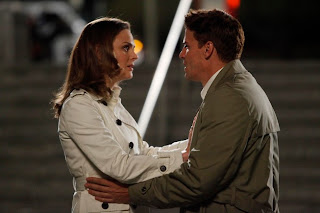 LinneGayl already blogged about Glee‘s return to television tonight (and boy, am I looking forward to it).  I’m a huge Gleek and the rumors swirling around about the back episodes of their first season have got me excited to no end.  But my return to television after several months of hiatus came a couple weeks ago, with Bones.  I know there are some Bones fans here at AAR, so if you haven’t caught up with the fifth season, beware.  Spoilers abound.

The spring premier episode had its own shockers–I  knew someone was going to get engaged in that episode before I watched it, and for some reason I was still surprised when Sweets popped the question. I love Sweets.  I don’t really love Daisy.  She’s probably my least favorite of the interns.  But I guess they’re cute together, and I’m holding out hope that this engagement doesn’t mean the rumors about Angela and Hodgins getting hitched at the end of the season are false.  The stars keep talking about “an engagement and a wedding” on the show this season.  This separation of two usually linked concepts suggests they might involve two different events. And if there’s anyone I want together more than Booth and Brennan, it’s Angela and Hodgins.

Which brings me to last week’s 100th episode, and the fall-out from the flashback.  It was so interesting to see how they met, and their own recognition of the chemistry between them.  But the biggest part of the episode was clearly the last 3 minutes or so.  I admit it– I cried.  I ached for them both.  I’ve gotten the impression a lot of people are angry at Brennan for turning Booth down, but really I just feel sorry for her.  She said it herself– “I can’t change.  I don’t know how.”  It’s clear she loves him and wants to be with him, but that for her, “not knowing how” really means she’s just scared.  It’s frustrating and heartbreaking at the same time.

I still have high hopes for their eventual union, but right now I’m just interested to see how this affects their working relationship.  The new episode on Thursday night takes them undercover pretending to be husband and wife at Brennan’s high school reunion.  Will there be tension? Awkwardness?  A slow dance? (According to the promos released by Fox, yes).

In case you wanted to watch those heartbreaking few moments again, here it is (albeit mirrored from the original):

Your idea isn’t incorrect,I am guessing God helps people who aid themselves. Come on!

Glad to be one of many visitors on this amazing web site : D.

An extremely fascinating examine, I might possibly not concur entirely, but you do make some very valid points.

I锟斤拷ll be subscribing to your feed so that I can get the latest updates. Appreciate all the information here

So I quite simply state you actually make several great ideas and I will publish a number of thoughts to add to soon.

You are an impressive writer. I am impressed with how well you expressed your views in this article. This is very intelligent and thought-provoking content.

i am a certified Gleek and i really love the TV Show GLEE. Diana is very pretty *`:

i am a certified Gleek and i really love the TV Show GLEE. Diana is very pretty ;,~

I don’t think it was a step back. Like Jane says, things are now in the open, which is good. And I think Booth has the courage to keep trying, in the sense that I don’t think he’s going to shut himself off from her.

I also think Bones does feel the same way, but she’s totally terrified. Her parents disappeared at 15, and when she finally found them, she also found out they totally weren’t who she thought they were. So for her, love and attachment are not good things. She took refuge in science, and has slowly been learning about people and feelings, through Angela and Booth. My guess is, she just wasn’t ready for that leap yet. But the feelings are there, I’m thinking.

It will be fun to watch it play out!

I don’t watch The Office at all, so I can’t really comment. Are Jim and Pam the main couple? I think people invest more in the main characters of the series regardless of how many other couples are on the show. Moonlighting was a program that had a huge following, but people began dropping when the two characters locked together. That’s why I don’t think Castle will have the couple together anytime soon. But that’s a show I began watching enthusiastically and have only caught an episode now and then the last couple of years.

As you said, progress in a relationship is good; but to keep interest, they have to hold the tension or they risk losing viewers, especially those who are keen on this couple. This is probably more for the women than the men. My husband quit this show quite a while ago due to lack of interest. It’s a fine line the producers tread; but if they want the show ongoing, they really know what they need and need not do to accomplish that.

See, I do get that argument, but there are so many examples of couples getting together and it still working. The Office’s ratings are still high, if not higher than before, and that’s after Jim and Pam finally got together and got married. It’s risky, but I wonder when it will be riskier to just keep frustrating viewers and stringing them along? It’s been happening for five seasons now– they can’t tease us forever. I think they can make it work. The chemistry is so good, I don’t think it will just fizzle out just because there’s more kissing haha.

I do think this is an important moment, though. things are out in the open. i’m hoping this means progress rather than the step back it appears to be.

I’m not a regular watcher of Bones, but I’ve seen a few episodes along the way. I did not see this first one of the new season. But I thought the playback was interesting. It makes sense. Getting a long-awaited couple together in a show spells disaster for that program and producers know that. The tension is done and viewers begin to dwindle away. If they intend to keep this show going, then they need to play this carefully.

However, back to the clip that the author (unknown) of this column provided, I liked how it played out. It made sense. She obviously wasn’t ready to commit and he made a rational decision to move on. As difficult as that may be, it’s the right thing to do emotionally and physically. Of course, if all our romance heroes did this in the books, we wouldn’t be left with much to read. But the show’s producers will milk this for all its worth and they’ll leave much of the tension between the two in, if they’re smart and want to keep their jobs, that is. LOL