Our annual staff poll for best romance is now in its eighth year, and it’s a tradition we’re continuing at a slightly different location: Our news and commentary blog.

Sadist that I am, I always enjoy watching my colleagues squirm as they narrow their favorites down to one. Over the years, we’ve had times of consensus and times when our choices were so disparate that we could hardly pick a winner. This is one of those “widespread choices” years; only two books received more than one vote, though as usual many staffers’ top picks were runners-up for others. The good news is that with so many books to choose from, there’s something (or several somethings) for everyone. To keep things suspenseful (since I enjoy torturing readers as well), this column will appear in two parts, this week and next week. First we’ll focus on contemporary romances. Eight of our reviewers picked them this year, and six of them will share their thoughts in this first entry.

“Well, for me it’s almost a tie.  Jane Graves’s book Tall Tales and Wedding Veils and Deidre Martin’s Power Play both left me happy all over.  Both of them are sweet and funny and feature great characters who grow and change as the story unfolds.  It’s really hard for me to name just one, but I think Tall Tales and Wedding Veils is ahead by a nose.  I liked how Jane Graves portrayed a bad boy in Tony McCafferty and showed us the vulnerable man hiding under the swagger.  And Heather Montgomery was so charming and smart!  I just loved the book, and I think I could read it every week for a year and not get tired of it.”

“Picking a favorite of the year is hard, because I honestly don’t read that many brand new books, other than those I review.  I will say, though, that in terms of how many times I’ve re-read a book, Lisa
Kleypas’ Blue Eyed Devil would probably top my list for the year. I’ve read it so many times already this year.  I just loved the characters and loved their relationship.

I’d say first runner-up for me would be Elizabeth Hoyt’s To Seduce A Sinner.  The only reason this doesn’t top the list, is because as good as it was, I still felt there was some untapped potential in the story.  And second runner up would be Stephenie Meyers’ Breaking Dawn.”

Lee Brewer:
Top Pick: This Charming Man by Marian Keyes
Runners Up: Thanks for Nothing, Nick Maxwell by Debbie Carbin, The Spymaster’s Lady by Joanna Bourne, Holly Would Dream by Karen Quinn, The Perils of Pleasure by Julie Anne Long

“This Charming Man by Marian Keyes is a sweet and funny story (with serious undertones) about three women in Ireland who were all involved with the same man at one time. Thanks for Nothing, Nick Maxwell by Debbie Carbin is the author’s debut book about a young woman who gets pregnant out of wedlock.  It’s a simple premise but the heroine goes from flaky to smart and caring throughout the story. Lots of humor too.  I’m really looking forward to the author’s next book. The Spymaster’s Lady by Joanna Bourne – Flat out awesome.  Why aren’t there more books out there like this one?”

“My favorite hands down is Linda Howard’s Death Angel.  It’s ever developing storyline drew me from the first page to the very last. Separating itself from the pack with its unlikely leads and paranormal twist, this is romance on a whole different plane and I found it immensely romantic.

Not Another Bad Date by Rachel Gibson:   This fun character-driven contemporary delivers a ‘returning to your hometown’ theme with a distinctive twist.  With two extremely likable leads, this book personifies what I most want when looking for a light romantic read.

Private Arrangements: A very strong heroine and an even stronger hero, the book is a battle of the wills with an old fashioned romance appeal.  Challenging the political correctness of today’s romance fare, this book delivers on several planes and I thought it quite simply a wonderful historical romance with a delicious storyline.  How I wish we had more of these to chose from.”

“I would say these are neck and neck for favorite – it’s hard to pick between them, but if I had to it would be  Anne Stuart ’cause I’m a fangirl and I know I’ll be re-reading this one before many other books.

Anne Stuart’s Fire and Ice – I didn’t think she would pull it off, but I loved these two young characters who make all the silly choices of youth and still manage to fall in love.  One of her best books in my opinion even though there is a sex scene while in danger – at least the characters acknowledged they were being stupid unlike in other books where it just happens and the plot moves on.

Hostage to Pleasure by Nalini Singh – there was a sexiness in this story that was missing from Mine to Possess.  Much more is revealed about the Psy and the hero and heroine were different from the ones that have come before.  It’s hard to keep a series fresh and not fall into a rut of Psy + Changeling = soulmates.” 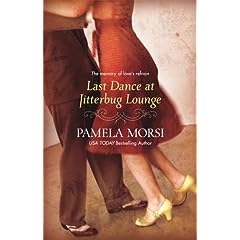 “The best book I read was Last Dance at Jitterbug Lounge by Pamela Morsi.  Nothing else I read came close to having the emotional impact of that novel, though it is not a traditional romance, but rather women’s fiction.”

Stay tuned for next Monday’s post, which showcases our historical picks and our winners.

Hello just thought i would tell you something.. This is twice now i’ve landed on your blog in the last 3 days hunting for completely unrelated things. Spooky or what? Seduce Women

What template are you running on this site ? I really like it. Could you post where you got it from ?

Took me forever to find this article.. I was looking all over the site!

Good grief! I am amazed by how many of the books mentioned above aren’t romance novels at all – but are either chick lit, or women’s fic., although I have read a number of the books listed. That said, I would totally agree with Cindy Smith’s choices (I’ll have to go back and look at what else she’s recommended). Where is Meredith Duran’s Duke of Shadows? Surely, that deserves to be on the list!

About 2/3 of these picks, I agree with and I’m delighted to know I’m somewhat in step with AAR. In fact, I found Sherry Thomas and Joanna Bourne through AAR and they are my 2 new favorites!! Some of the others I haven’t read yet. Also, don’t miss Lisa Kleypas’ contemporaries – SO GOOD!!!!

I definitely have to agree with Ellen. Tall Tales and Power Play were two of my favorites, with Tall Tales definitely in the #1 spot. I loved Tony and Heather! As for Not Another Bad Date, I was somewhat disappointed with it. It was an above average read, but just didn’t come close to being as good as Ms. Gibson’s previous releases.

I go with Lea on DEATH ANGEL (a definite keeper) and in fact I’ve already read it twice. It’s worth springing for the hardcover edition.
NOT ANOTHER BAD DATE is a positive recommend also.

Don’t feel bad, Tee. You’re not alone. I’ve not read (nor even heard of) more than half of the books listed. I’ve read and will agree with PRIVATE ARRANGEMENT, TO SEDUCE A SINNER and THE SPYMASTER’S LADY. I liked HOSTAGE TO PLEASURE, FIRE AND ICE and NOT ANOTHER BAD DATE. But I passed on the Julie Anne Long for whatever reason, ditto the Deirdre Martin (I’ve been underwhelmed by her last several books) and I don’t/haven’t read any of Kleypas’ contemporaries.

Wow, I kind of thought I was a bit out of step here at AAR, but I didn’t realize how much. There’s only one book out of all those mentioned that I really liked and it was Rachel Gibson’s “”Not Another Bad Date”” (Lea Hensley’s pick). In all honesty, though, I haven’t read all of them, but that would be because the appeal wasn’t there in the first place. I’m still waiting for “”Power Play”” by Deidre Martin from the library, so I can’t comment on that one yet.

Maybe I’ll do better with next week’s picks. One can hope anyway. It was fun seeing these choices just the same.