Escape from Gosselin Island and Trampire

END_OF_DOCUMENT_TOKEN_TO_BE_REPLACED

"Shirt off! Shirt off!" (Or: The Squee Heard 'Round the World)

So yesterday Twitter and the rest of the internets were burning up with this news: Edward, shirtless.

And the crowd goes wild!

My little celebrity crush on Mr. Pattinson has gotten a bit out of hand in recent days, nourished by youtube interviews and Cannes photos, but all I have to say here is:

Airbrushed or no, this boy has been working out.   He looks a hell of a lot better than he did in those naked stills from Little Ashes (A film I actually have no desire to see, hinging on it does on a frustratingly doomed obsession; plus, the reviewers seem most underwhelmed).

But who cares about Little Ashes when we have so many more Robert Pattinson movies being filmed in the near future: Remember Me this summer, then Eclipse, then Unbound Captives (where Rob will go Comanche), then Bel Ami (featuring […]

Watching with my Finger on the Rewind Button: My Twilight Experience 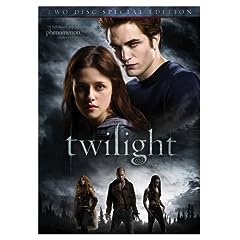 Yesterday I checked out a library copy of the movie Twilight with Kristen Stewart and Robert Pattinson and found myself unexpectedly enthralled by the chemistry between Bella and Edward onscreen.  Honestly, I cannot remember the last time I watched anything that had me pausing and rewinding so much so as to catch every expression and nuance.

Confession: I’m kind of out of the pop culture loop now and have been since I quit my job as a youth services librarian to stay home with my son and downscaled my life accordingly.  But I did read Twilight when it came out and found it entertaining but hardly inspirational.  I didn’t go mad for Edward Cullen, and I did not go on to read any of Twilight‘s sequels.  It has not escaped my notice that Stephanie Meyer’s books have become a YA marketing sensation, but I never felt the need […]