We’re all in this together–and we’ve got a page to prove it!

Update: Just checking in to see how everyone is doing. Most of us are now living under shelter in place orders for at least the next month. For me, that’s meant a lot of one of one time with my spouse, more walks with my dog, and more cooking. How about you? END_OF_DOCUMENT_TOKEN_TO_BE_REPLACED 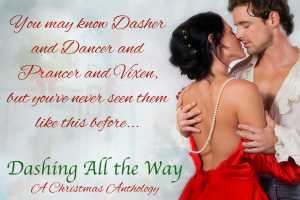 Today they give us a behind-the-scenes look at what inspired their new Christmas anthology, Dashing All the Way.

“Welcome, and thank you for joining us at AAR today. We’re happy to be here to share how our anthology came to be. Last Christmas I had a blessed break in my writing schedule, and actually got to enjoy all the things I love about the holiday season—decorating the house and tree, and baking cookies and pies while singing along to Christmas carols!

And right there in the middle of a chorus of “Jingle Bells,” I thought ‘I should […]

I’ll admit it’s not easy staying in shape, and at times I seem to be fighting a losing battle. In the middle of the winter, curling up with a good book is much more appealing than going out for a long walk on a sub-zero day. But on most days I do try. In nice weather I go for a lot of walks; in colder or rainy weather I’ll return to the treadmills in the fitness center where I live. I attend yoga classes off-and-on, or do some yoga at home, to work on my balance and flexibility.  And I even have a few free weights to do some strength training. Perhaps it’s my own efforts in this regard, but lately I’ve been longing to read about contemporary romance heroines who squeeze in a bit of exercise into their lives.

Speaking of Audiobooks: The Best In Romance Audio Publishing

If you’ve been an audiobook enthusiast for long, you know that the industry exploded with the availability of digital downloads.  As a result, the number of romance releases increased sharply and the selection only gets better with each passing month.  As one of those enthusiasts and a fan of romance, I pay close attention to those audio publishers who historically have offered a significant selection of romance audio and continue to do so.  You know, those publishers who take the time to choose quality narrators for their titles as well as discover those authors that make romance listeners sit up and take notice.  Here’s to giving a shout-out to those publishers who are doing a particularly fine job of it.

Before we start, I’ll add a disclaimer – I’m using numbers from Audible.  I’m aware that there are audiobooks from years ago in audio cassette or CD format that have yet […]

My Beef Against Contemporaries

It’s no secret that I like historicals.  No, change that.  I love historicals.  Yeah, I complain about the proliferation of Regencies.  But when all’s said and done, I look at my list of treasured books, and the vast majority are historicals.

My second preference would be for paranormals and fantasy.  Contemporaries, I’m afraid, are a very, very distant third.  I used to think this was due to several reasons, like the fact that historicals are my first love and that I love the escape into a separate world.  And those are still true.  But the other day, I had an epiphany, which, frankly, I should have had a long time ago: One of the main reasons I don’t read as many contemporaries as I do historicals is that 99.9% of contemporary characters are white and Christian.

My issue isn’t that I don’t qualify as either white or Christian.  After all, human emotions […]

Romance Author Booksignings: October and Beyond

This past month I attended a booksigning for William Kent Krueger, who was promoting his latest Cork O’Connor mystery, Northwest Angle.  I haven’t read the series, and still am not sure if they will suit me. But I love listening to authors speak, so jumped at the chance to attend.

There was a large audience, and many had attended previous signings by the author.  As soon as the event began I knew why there were so many repeat attenders; he is one of the most engaging writers I’ve encountered. The time went by quickly as Mr. Krueger entertained us with stories about his writing process, his decisions about his characters, and future directions his writing might take.

Romance Author Booksignings: April and Beyond

Earlier this month I attended a booksigning by one of my favorite historical mystery authors, Jacqueline Winspear, the author of the popular Maisie Dobbs series. If you haven’t heard about the series and like mysteries set in post-World War I England, you can check out Ellen’s DIK review of the first in the series here at AAR.

The booksigning was held at one of the larger independent bookstores in town. I arrived nearly 30 minutes early and planned to browse before the event. My plans changed when I discovered that nearly every seat in the place (over 100) was already filled with people. I quickly snagged a copy of her book and sat down. By the time Ms. Winspear arrived, people were sitting on the floor and standing wherever possible.

Although I’ve read the entire series, I really knew nothing about Ms. Winspear until this event. I was pleased when she announced that rather than doing a reading from […]

As I was reflecting this week on elements that unify us as readers, it occurred to me that many of my reading colleagues are also fellow animal lovers. I live in a house filled with rescued cats and dogs, which is by turns delightful and frustrating. Delightful because life doesn’t get much better than snuggling with a book and a kitty in my lap. Frustrating in that many of my books are now missing covers courtesy of a certain coonhound who has an affinity for ripping them off when my back is turned.

Since I am such a sucker for animals I almost always find it a bonus when a good romance features a furry companion. Especially if the author is adept at creating a unique personality to where the pet becomes an actual character in the story.

Without further ado, here are a few of my favorites:

END_OF_DOCUMENT_TOKEN_TO_BE_REPLACED

Romance Author Booksignings: February and Beyond

Lately, while looking for booksignings to post, I’ve noticed that a lot of authors are going to be appearing at various book festivals around the country.  I’ve only been to two book festivals, and have to admit that I didn’t really enjoy either one. The first I went to was the Printers Row Lit Fest in Chicago. It’s held yearly in Chicago in early June, and the year I went it was unbelievably hot, and the festival was just packed. I really didn’t know what to expect, and ended up fighting the crowds for a few hours, trying to get close to tables with books, without a lot of success. I finally left, without buying anything or seeing any authors.

My second experience was the Texas Book Festival in Austin, held in October. I didn’t know the festival was happening, and happened to be downtown with a friend and discovered the festival by accident. We didn’t have a […]

This has been a banner month for me for book signings. In late October I attended a signing for a debut mystery author, Gary Corby, at my local mystery book store. He was charming, and ended up talking and answering our questions for almost 90 minutes. I walked away with his book – The Pericles Commission – as well as a handful of free bookmarks.

But as fun as that event was, the real literary highlight for me of the past month was attending a book signing by Lauren Willig, on tour for The Mischief of the Mistletoe (yes, Turnip’s story). I arrived at the event about 30 minutes early, and a lot of the chairs were already full. As I settled into my chair, more and more readers arrived, and the bookstore staff kept busy bringing out extra chairs.