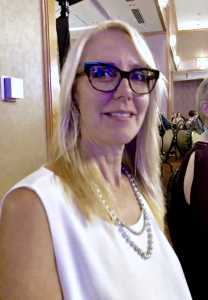 I caught up with Loreth Anne White at RWA and was, honestly, kinda thrilled. I’ve been a fan of her books for almost as long as I’ve been reviewing. (If you like romantic suspense and haven’t read her Angie Pallorino series, you’re missing out.)

Dabney: What are you working on now?

Loreth: Up next is a dark suspense/thriller with two intertwining narratives and a romantic thread. Think Cape Fear, think Deliverance. Think wilderness and survival. I can’t really say much more yet – it’s in that fragile embryonic stage

. I’m also working on a follow to the Angie books on the side. I’ve had so many readers asking for Holgersen’s story, and I’m dying to bring it to them.

Dabney: Which of your books was the hardest to write? The most fun?

Loreth: They all seem the hardest at the time! I honestly think I had to most fun with the Angie books though.

Dabney: What’s your prediction for the next big thing/s in romance?

Loreth: I’m going to go out on a limb here and say that the next trend in the industry could be an increased push toward the subscription model. Like a Netflix for books. I think Amazon is making big inroads here with their Prime program where participating authors/publishers are paid a flat fee to put their books into the Prime program, and then the units are given ‘free’ to subscribers of Prime for the duration of the participating period (and the number of units that are downloaded by readers is kept top secret even from the authors at this point – possibly to drive down the entry fee for the future).

Dabney: What’s a word you love to use in your work? One you never use?

Loreth: ‘Subterranean’ is one word that tends to want to pop up a lot while writing.

One I never use – I probably can’t even use it here to answer this question – is a derogatory term that references part of the female anatomy. I’ll never say never though, because context might require it one day, but so far, no.

Loreth Anne White is an award-winning, bestselling author of romantic suspense, thrillers, and mysteries, including The Drowned Girls, the first book in the Angie Pallorino series. A three-time RITA finalist, she has also won the Romantic Times Reviewers’ Choice Award, the National Readers’ Choice Award, and the Romantic Crown for Best Romantic Suspense and Best Book Overall—in addition to being a Booksellers’ Best finalist, a multiple Daphne Du Maurier Award finalist, and a multiple CataRomance Reviewers’ Choice Award winner. A former journalist and newspaper editor who has worked in both South Africa and Canada, she now resides in the mountains of the Pacific Northwest with her family. When she’s not writing, you will find her skiing, biking, or hiking the trails with her dog. Visit her at www.lorethannewhite.com. Her most recent release is The Girl in the Moss.

Yay for Holgerson’s story :) He’s so oddly endearing, I can’t wait to read more about him!