Talking with Sherry Thomas at #RWA16 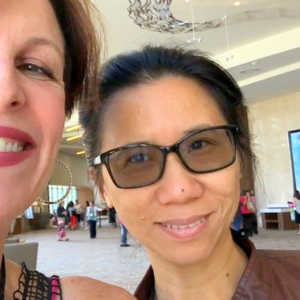 I read my first Sherry Thomas book–Private Arrangements–in 2009 and that was it for me. So when Berkley asked if I wanted to interview her at RWA, I had to restrain myself from not replying yesyesyesyes… in ALL CAPS.

Sherry’s journey as a writer fascinates me. As her website says, “English is Sherry’s second language—she has come a long way from the days when she made her laborious way through Rosemary Rogers’ Sweet Savage Love with an English-Chinese dictionary.” She’s written some of the best historical romance out there, published a knock-out YA trilogy and, come the fall, will tell the story of Sherlock Holmes from a whole new perspective.

In person, Sherry is warm and wry. She and I talked about Austin–where she and her family live–, the Fitzhugh trilogy (She’s justifiably proud of Ravishing the Heiress), and what her childhood in China was like–she has only lovely memories. I asked her if she’d write historical romance again–desperately hoping she’d say yes–and she said, perhaps yes, but only when she finds another story that calls to her. :(

A story that did call to her is that of Sherlock Holmes. She was watching the BBC show Sherlock and thought, huh, there have been so many Sherlocks but they’re always male. What if Sherlock were a young woman? Thus her new series, The Lady Sherlock series, was born. The first book, A Study in Scarlet Women–we’ve read it and it is wonderful–comes out in October.

How old were you when you wrote your first romance? Plot?

I was 25 when I finished the first draft of my first book. The plot: a young woman and a young man fall in love, but he has promised to look after someone else, so she does a bit of forgery to make him believe that the other woman has already married. If that sounds a bit familiar, it’s because years later the book would morph into Private Arrangements. The underlying idea never changed, but the entire execution did.

Tell me two truths and a lie.

What would your most recent hero never do in bed?

My most recent romance is a contemporary. And I’m pretty sure the hero is the kind who’s up for anything, pun not quite intended. :-)

If you could make up the perfect name for a fictional President, what would it be?

I have no idea so I threw it to an online name generator and I must say I’m pleased with the result, Conrad Hesselblatt.

Game of Thrones Season 4, but we watched that over 2 weeks so I’m not sure whether that’s true binge watching. Before that I devoured all by myself a whole season of a Japanese anime, Kabaneri of the Iron Fortress, which is a post-apocalyptic zombie epic with armored trains. Armored trains!! I finished all 12 episodes within 24 hours.

Which do you prefer: Wuthering Heights or Jane Eyre?

This is where I gird my ovaries and confess that the Brontes aren’t for me. If I must, I’d say Jane Eyre, because I’d only jog away from Mr. Rochester but sprint from Heathcliff.

If they made a movie of your life, who would play you?

Fan Bingbing. (Not really, but it’s not as if there will actually be a movie about my life either.) :-)

What’s the last book you read and loved?

What’s next from you?

A historical mystery that posits that the fictional character of Sherlock Holmes was actually inspired by a real woman named Charlotte Holmes. The title is A Study in Scarlet Women, a nod to the title of the first Sherlock Holmes story (A Study in Scarlet) and because it features quite a few women who are or have become less than respectable in the eyes of Victorian society, including, of course, Charlotte Holmes herself.

Sherry’s next book is A Study in Scarlet Women. Here’s the blurb:

With her inquisitive mind, Charlotte Holmes has never felt comfortable with the demureness expected of the fairer sex in upper class society.  But even she never thought that she would become a social pariah, an outcast fending for herself on the mean streets of London.

When the city is struck by a trio of unexpected deaths and suspicion falls on her sister and her father, Charlotte is desperate to find the true culprits and clear the family name. She’ll have help from friends new and old—a kind-hearted widow, a police inspector, and a man who has long loved her. But in the end, it will be up to Charlotte, under the assumed name Sherlock Holmes, to challenge society’s expectations and match wits against an unseen mastermind.

Preorder from Amazon, iBooks, Kobo, or Barnes and Noble.

Hey Sherry Thomas! Thanks for all the wonderful hours of reading your romances. The YA trilogy was incredible and His At Night is one of my favorite romances. And I’m with you about the Brontes……great answer!

Looking forward to the new book. Will it be out in audiobook?

There’s already a CD you can preorder, so I’d bet yes!

I really can’t wait to read it.

A great interview with an outstanding author. I was introduced to Sherry’s writing by Caz and am now a huge fan. I’m always amazed at the sheer range of subjects she covers so knowledgeably; I can think of only one other author who covers such a range – Laura Kinsale.

Really looking forward to this one!

Thanks for the interview. I hope she doesn’t leave historical romance forever. She has such a unique and wonderful voice in that genre.

Not Quite a Husband is my favorite of Ms. Thomas’s books– such a wrenching story. Can’t wait to read the new historical mystery.

Fingers crossed that Sherry finds another HR storyline that appeals to her! But I loved the YA trilogy and the Charlotte Holmes book – she aces whatever she turns her hand to, it seems!