the ask@AAR: What was your first paying job?

When I was 16, I wanted my own phone line–we were a family of six and my father had rules. My parents agreed that as long as I kept my grades up, I could get a job. This was in 1977 in South Florida and the mall was king. I actually got two jobs, both at Boca Mall, one as a sales clerk in the bra department at Burdines Department Store and one as a waitress at the Walgreen’s Grill.

The bra job was a lesson in being a peon. I was treated as though I might steal the store blind and was only allowed to bring a few things that would fit in a clear plastic pouch when I came to work. My supervisors looked at that bag every time I left–sure, I think, I’d try to steal some Clinique Black Honey lipstick. But at least at Burdines I could wear our my clothes and my bosses, at least in lingerie, were non-lecherous. 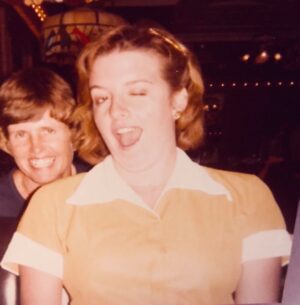 The same could not be said at the Walgreen’s Grill at Boca Mall. There my boss offered me one of two horrific mustard yellow uniforms–one large enough to hide several small children in and which was impractical to wear because it would catch on the closely packed tables and one several sizes too small. I got tipped in pennies and the customers were routinely as rude as they could be. In my lowest moment as Walgreen’s waitress, I slipped and spilled a large chocolate milkshake all over a woman in a white pantsuit. She was irate. Sadly, I didn’t not get fired.

I had a series of unfun jobs as a teenager and while in college. I am grateful for them all–they made me appreciate the jobs I’ve loved.

How about you? What was your first paying job? And do you have any great stories to share?

My Dad helped me with a walking paper route starting at about 10 or 11 years old. I am a night owl naturally, so it was torture, but an important lesson in the value of work. As others have said on here also, I started to babysit very young but felt “rich” earning that $2 an hour!

Mine wasn’t until I left school and before going to university so I was almost 19. (I never had a Saturday job because Saturday mornings were spent at music school). I worked for a school outfitter which both made and sold school uniform for a large number of different schools both in the area (North East London) and out. It was very ‘old school’ – in the girls’ department the senior staff were always addressed formally (no first names!) we hand-wrote invoices, worked behind glass counters… this was the early 80s, not the 1950s in case you were wondering!

My first job was in a teen clothing store in the mall when I was 16 years old. One day, an “old woman” came in and was trying on outfits meant for teenagers— hip huggers, tight tops, etc. I thought she looked a little silly, and I did not know what to say when she asked me what I thought. My manager saw this and came and hissed into my ear, “Miss S., get out there and sell!” So I took a deep breath, told the lady she looked amazing in every outfit, found more things for her to try, and she ended up buying a big stack of clothes. My manager was very happy, but I was conflicted because I thought I had done something dishonest and manipulative. I decided sales was not for me, and ended up quitting not long after. Looking back, the woman, who was probably in her 40s or 50s, probably was young at heart. Who was I to decide she was too old for teen clothing?

Not my first, but one of my first “real” jobs was a temporary/seasonal one on Christmas break from college doing phone orders for a clothing chain with a big catalogue business at the time. It had a list of steps we had been hastily trained on for the phone orders on a big poster on the wall. Step 8 was literally spelled out “compliment the customer’s choice!”

No matter what they said they wanted to order we were supposed to say something like “Oh that color is great!” Or “Oh what gorgeous dress!”

Needless to say I have been very suspicious of any compliment or opinion I receive when shopping ever since, LOL.

My first job that I had to pay taxes on was working for the brand new McDonalds that was built in my town. I started as a junior in high school and got paid $1.90 an hour. I worked there for about four years. My final pay was $2.10. Lol. McDonalds taught me clean as you go and no standing around doing nothing. I had to add everything up on paper and use a sales tax chart to add in sales tax.

My first paying job at 16 was in a fabric store (Clothworld). I’d been sewing clothes since 12 or 13 and I was so excited to get a job related to something I enjoyed. And the moment I’d saved enough $$, I splurged on a top of the line Viking sewing machine for $650. My father couldn’t imagine spending that kind of money on a sewing machine in 1976 – we’d purchased a used Ford Pinto car for me to drive about the same time (yeah, the exploding kind) – but I used that sewing machine for 20 years before I felt like I needed to trade up to something better.

It was a great job until I got out of high school, needed more than “fun” money, and realized it’d never be anything more than a minimum wage gig.

Glad you manage to survive your Pinto. Lol.

At the ice cream stand up the street from where I live! I love those folks. We’re still on a first-name basis.

My first job at 16 was detasseling corn for 75 cents an hour. This involved walking the rows and reaching up to pull the tassel off of the stalk. It was ridiculously hot, buggy and exhausting work. It was very difficult for high school students to find summer work because we lived in a college town and the college students were tough competition!

Oh my heavens, that sounds brutal.

Where I grew up there were a bunch of fruit orchards and farms outside of town and my first job was working at a fruit stand there along the highway selling whatever the owner grew. It was a fun summer job and I worked with other girls my age. It was super relaxed, we could eat the fruit, and I got paid in cash right from the register. I definitely had worse jobs when I got to college, but that was my first.

My first “official” paid job was the summer after high school (1973) manning the soda counter/lunch bar at a local drug store. I always worked alone and made sandwiches and fountain drinks. It was pretty easy and I made enough money ($500) over the summer to buy my first car, an already old Volkswagon Squareback that was subsequently named Boink, because of the sounds it made. :-)

As for a job where taxes were withheld and I had to clock in/out, that would be summer of 1974 at the Sandwich Hut on Jekyll Island, Georgia. Typical food service job. I saved my money and bought myself a black-and-white tv for my room. I ended up putting myself through college on waitressing money. I always say everyone should have to do some sort of low-level service job in their lives to build their empathy and appreciation.

I found something similar at my first babysitting job. The couple had erotic “romances” on their shelves and, since I was a reader, I found them when I was looking for something to do when the kids went to bed. Eye opening, for sure! I wasn’t as discreet about replacing them, and I found out later they knew and my parents knew I read them. I was 12 to 13 years old. No one ever said anything until much later. Interestingly, my memory for detail has always been pretty bad, but I still have vivid memories of some of the scenes in those book.

Our next door neighbors, when I was in junior high, had The Joy of Sex as a coffee table book! I read it whenever I babysat mostly marveling at the hair.

Haha, my parents had that!

Me too! My first romances were Barbara Cartland books (and Glamour magazines) on the shelves of the homes where I baby sat. Pretty tame stuff compared to what y’all were able to find!

I lived, at the time, in the Bay Area in California. It was WILD. On other babysitting jobs, I’d read Sidney Sheldon, Judith Krantz, etc….

The folks I babysat for (at 35 cents an hour until I got a raise to 50 cents an hour, in the early 1960s) had a couple of volumes of Victorian erotica. Which I read from cover to cover, carefully restoring each book to the spot from which I had pulled it out. I have no idea if they knew what I was reading.

I wonder how many of us “women of a certain age” received our earliest sexual awakenings from books we discovered on the shelves in houses where we were babysitting!

Probably lots of women who were readers who babysat for readers. I sat for several families, but only one had as many books as my parents. I also found my parents’ hidden copy of Lady Chatterley’s Lover. Then I went off to college, where there was a lot of erotica circulating in my freshman dorm, courtesy of mores of the end of the Sixties and beginning of the Seventies.

In my hometown, there were regular Boy Scout paper drives, where the scouts earned money collecting newspapers and magazines to sell to the local junk dealer. There was a long tradition of men in the community making sure their issues of Playboy were handed on to the paper drive, although they had no illusions about the issues actually being sold to the junk dealer.