I’m closing out my first full year as a reviewer at AAR with a list of my top ten favorite books of 2016! 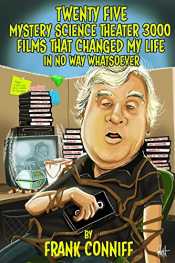 I’m a long-time MiSTie  who has devoured Kevin Murphy and Mike Nelson’s books, and Conniff – a natural storyteller – surpasses both of his colleagues with this tome.  Conniff’s contribution to the MST3K canon is a stroll through the ten movie he screened (It was one of Conniff’s main jobs during the Sci Fi era run to screen potential movies for the show to tear apart) while working for MST3K.  A delight.

The Princess Diarist by Carrie Fisher

You can never go wrong with Carrie Fisher’s autobiographical work, whether she’s reliving her life as a child of Hollywood, talking about her time as Star Wars icon Princess Leia Organa, or discussing her personal struggles.  Her voice is even more important to me now, in the light of her early passing.  The Princess Diarist recounts her life filming the three original Star Wars films.  Everyone’s been talking about her revelation of a on-set affair with Harrison Ford, but there’s much, much more to unpack here.

You probably don’t need me to tell you to try out this little sparkler of a romantic comedy featuring two longtime work rivals in a battle royale for a promotion.  Everyone loves it for a reason; it’s wonderfully written and the best sort of throwback to old fashioned romantic movies without being regressive.

Ms. Smith’s latest is a beautifully written story about the power of friendship and music to haunt even years after the relationship’s been extinguished.

The Muse by Jessie Burton

I love historical fiction.  I love stories about the struggle between muse and artist.  So naturally this one caught my eye and managed to perch itself in my heart to boot.

This one was like catnip for me.  Small town setting?  Musical Heroine?   Sheriff who believes in the heroine’s art even when she doesn’t?  This is a delight.

A gripping story about the nature of motherhood, following a woman who abandoned her child at the crotch of a pear tree to escape her small town for a better life – only to return years later unfulfilled and find herself pitted against the rum-running adoptive mother of her biological child.

Because of Miss Bridgerton by Julia Quinn

I am a sad, sad case for Julia Quinn; I freaking love everything she does and this book is no exception to the rule.

Lady of the Lakes by Josi S. Kilpack

I’m sort of cheating since this one wasn’t released until early January, but Ms. Kilpack earned a spot on my top ten for spinning some involving historical fiction that absorbs and grabs the reader right from the first paragraph.

This is one heck of a charming novel.  I reviewed it for AAR this past summer and let me tell you – it’s a sparkler of a book.  If you have a thing for college professors, small dogs, goofy but hot romances or small town stories, pick this up!

Though not romance, Zadie Smith is fabulous and one of the best contemporary literary fiction writers today, I think.

I like Wild at Whiskey Creek a bit better than the first in the series too, and what I liked is how unusual it still seems for the man to admire the heroine’s art enough to make it a priority in his life that she find a way to be successful, even if that means he cannot share a life with her. He’s almost too good to be true, but I loved the fantasy of it.

So glad to see Wild at Whiskey Creek on here! I vastly preferred this one to the first book in this series. I also enjoyed the Quinn book, even though it wasn’t on my top of 2016 list. This one was a nice return to what I love about her books after the utter disappointment that was The Secrets of Sir Richard Kenworthy.

I’m a big Carrie Fisher fan so that memoir has been on my TBR as well.

I still haven’t finished Sir Richard Kenworthy myself, so I picked this one up with a lot of trepidation – it totally worked for me to my relief.

Wild at Whiskey Creek was a lot of fun! It took two readthroughs to grab me and now it’s on my keeper shelf.

Re Zadie Smith – obviously White Teeth is a great place to start with her. Swing Time contains a lot of tropes I adore (complicated friendships) so it grabbed me immediately.

Honestly, I wouldn’t bother trying to finish the Kenworthy book, but that’s just me. I find our titular hero completely despicable.

Zadie Smith has been on my list of authors to check out for years. I should make that a priority this year. :)

I think Wild at Whiskey Creek’s presence on this list has finally tipped it onto my TBR – the cover made me skeptical for a long time, but it has been recommended too many times now to ignore!

I really hope you’ll enjoy it!

Me too. I thought Ms. Long is starting to find her voice in the second book. I’m very optimistic for the third!

She’s one of those authors who’s slowly getting better and better as she goes along, which makes her fun to follow.