Once a genre which evoked aliens, Mars, robots, androids, galactic battles and the like, the entrance of female writers into this genre has also added more romance, emotion and relationship factors into books which mainly look sci-fi or fantasy but are actually a hybrid with romance. There is even an award which exists for science fiction-fantasy-romance based novels and it is called the Sapphire award. The three covers we are going to look at are shelved in science fiction both at Borders and at my library. Can you tell these books have a full romance element in them by looking at the covers?

The only clue on the cover of The Radiant Seas by Catherine Asaro that there might be romance element within is the good-looking woman who dominates the cover’s foreground, rather than a man. She is also in the midst of a fierce battle in a science fiction looking setting. She could well be Superwoman though from her pose here. The cover does not evoke the words emotion, love, relationship or romance. Nonetheless, Catherine Asaro has distinguished herself by being a real-life scientist who can write hard science in science fiction and balance it with emotional romance. Could this book be shelved in the romance section? No, it doesn’t mesh at all with other books shelved there. Could the book’s contents be shelved there? Yes, it is solely the cover keeping it out.

The Moon & the Sun by Vonda McIntyre blends more genres than seems possible. The book is set at the royal court of Versailles during the reign of King Louis XIV, the Sun King, when France dominated the world. The heroine’s brother returns to court with a captured sea monster for the king to study. This creature is straight out of the fantasy realm and has all sorts of magical and mystical powers plus the ability to communicate with humans by song. Add to that a hero who is a Count, a ladies’ man and a dwarf plus a heroine who is straight out of the convent. How would you describe that visually? Actually, the solution was pretty good, being a very romantically styled painting in golds and greens with the sea creature almost hidden in the left foreground. It has captured the world of fantasy but also suggested the presence of romance. It wouldn’t quite fit in with books shelved in romance but it wouldn’t clash as much as the Asaro one did either. This would be a wildly unconventional romance read to most fans of the romance genre, although I enjoyed it. I did notice that the image was cut down for the paperback version and doesn’t look nearly as nice as the hardback’s full image painting. 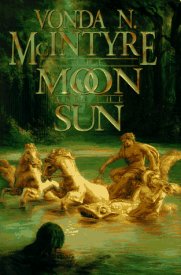 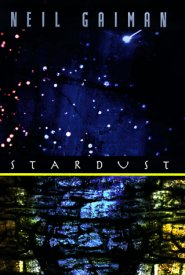 Neil Gaiman’s Stardust is a love story set squarely in a world of fantasy that some readers compare to William Goldman’s The Princess Bride. Gaiman is already well known from the world of graphic novels and sciece-fiction-fantasy. Although not a wholly abstract cover, note that this cover is far less representational than any other cover pictured. It’s even a split image with the upper image suggesting sky and space and the lower image conveying earth or inside the earth. The value of going to a cover image like this is the reader’s imagination can add things into the cover since it is more open to definition and interpretation. One can also shelve it in more places than a representational cover. It still looks more sci-fi-fantasy than anything else but this is one direction that the blended genre books could move to with their covers: more abstraction.

This genre came into its own in the 1970s with the arrival of the “king” of the genre, Stephen King. Before this, any novels with paranormal elements simply went into general fiction. There weren’t enough of them to form a separate genre. Most of the authors identified with this genre are male although a few females are moving in as well. With them comes a hybrid with romance although several male horror writers have also recently written romantic based horror.

Along with many other readers, I found Stephen King’s Bag of Bones more successful in its paranormal elements than it was with its romance elements. However, for his first attempt at romance, it was not bad. Unsurprisingly, his publisher chose to feature the paranormal element on the cover, which he is known for, not the romantic one. The woman who is screaming is the primary ghost behind the paranormal plot. She is not the hero’s love interest. The rest of the cover features his vacation home lakeside setting in Maine where the story occurs. If the publisher had wanted to feature the romance element there was the ghost of the hero’s dead wife who could have been shown instead. She was one of two female love interests in the novel. It’s surprising that image wasn’t used because it would have covered both genres. 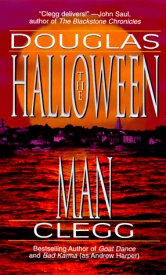 Halloween Man by Douglas Clegg is also a paranormal-romance blend. I was surprised to discover in the reviews and customer comments online at Amazon that they all considered it very successful as a love story in addition to a horror story. Its overall reviews were higher than the King one. I have not read it yet but the love comments piqued my interest. I cannot tell from the cover that this is a horror novel or a romance novel. The publisher has elected to show the place where the story is set instead. However, there is a big pumpkin-size setting sun shown which does fit in with the title. Using the place as the cover is used by the publisher when it wants a more mainstream look. It tells you nothing about the book except its setting. The problem can be that by trying to appeal to everyone, the cover ends up appealing to no one in particular. Its sole virtue seems to be that you can shelve it almost anywhere. Nevertheless, the intensity of the colors in the water and sky is very well done here and might prompt me to pick it up.

Burnt Offerings by Laurell K. Hamilton is one book in a continuing series about a protagonist named Anita Blake who is a vampire hunter. These books are very popular with romance readers although I have read comments that they wish Anita would make up her mind which hero she wants. The cover does show the place in the foreground but, in the background, you can see the vampire with his purple eyes. It is almost nighttime in the cover which is fitting since that is when vampires get up and go about their activities. There would be no doubt in my mind, wherever you shelved the book, that I was looking at a horror cover.

The Silver Wolf by Alice Borchardt is about werewolves in Rome during the Charlamagne’s rise to power. The protagonist is the heroine who is also a werewolf. Her hero is also a werewolf who heads his own stronghold of warriors. The heroine is pictured on the cover, both as a wolf and as a woman but with eyes matching the wolve’s. There is also a column placed next to them which gives the setting without our having to see all of Rome. The colors are all in shades of silver but for the eyes. They are a raw sienna which contrasts beautifully with silver. This is an excellent cover which blends historical fiction with paranormal. I believe this book could be shelved in any of the three genres and it is the only book we discuss that achieves that distinction.