Genre Blending: Romance Novels as Hybrids with Another Genre

We fortunately live in a time where experimentation in genre writing is broader than it has ever been. As part of that movement, many authors who write romance are also combining elements of another genre into their books. For the publisher, this movement comes down to a few basic concerns. These are: how is it going to market a genre blended book and where does it want the book to be positioned in bookstores? To answer both questions, the publisher, of course, turns to the books’ covers as a primary source of advertising the genre(s) of the book. We’re now going to look at other genres which have joined with romance and study certain covers which have been chosen to represent the blended genre and how successful, or not, they are in telling us that romance is as big a part of the book.

Female authors and protagonists have successfully penetrated the American mystery genre, one originally pioneered by men with the resulting hard-edged image of film noir which began in the 1940s. That these women authors are putting love and romance in their books instead of the femme fatale as “the woman” is not surprising.

J.D. Robb’s In Death series:
J.D. Robb is the pseudonym of romance writer Nora Roberts. Her In Death series combines romance, mystery and futuristic society in New York City with a woman police detective as the protagonist.

Except for the very latest In Death cover (for Conspiracy in Death), all of them, including this one for Glory in Death, show a graphic of a female murder victim. These covers are sleek, eye-catching, modern and bright and fit in with that hard-edged American film noir image. Would I know that a romance was in them? No. Would I know that they are set in a futuristic society? No because the image looks present day. I always find these books positioned in the mystery section of Borders. The cover fits in there although the content of the book could have alternatively placed it in either romance or science-fiction. Does this cover show it is a blended genre? No. 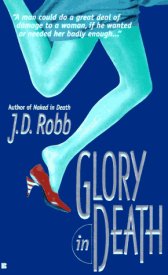 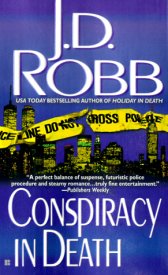 The newest book in the series, Conspiracy in Death, shows a graphic of New York City which has yellow police crime-scene tape festooned over it. I personally like this cover less than the prior ones but it clear that this is a crime novel from the police tape shown.

Janet Evanovich is a former romance writer who switched to writing mysteries blended with romance. In her Stephanie Plum series, she features a female private investigator. Her cover for Three To Get Deadly is almost identical in concept and design to the Glory in Death J.D. Robb cover. It is being promoted as a murder mystery and you would expect it to be shelved in the mystery section, which it is. We cannot tell by the cover that there is any romance blended within the book. 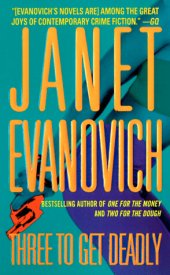 Jennifer Crusie’s single title novels:
Now we come to an author whom the publisher is having trouble deciding which elements of her books to promote. Crusie went from writing very humorous series romances to writing hardback fiction for St. Martin’s Press. This was quite a jump and her core romance reading fans may have had some problems figuring out where to find her in the bookstore. In my Borders, these books have never been positioned in the romance section. We’re going to look at the three covers of Crusie’s St. Martin’s books. 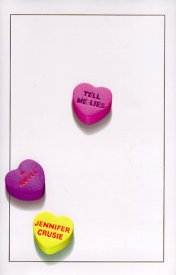 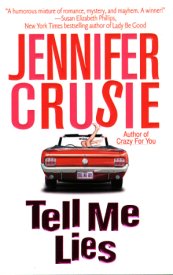 Tell me Lies, paperback This is one of the most understated book covers I’ve ever seen. It tells me very subtly that it is probably women’s fiction with a romantic element in it, although it could well be a broken romance or divorce. In fact, the novel is a blend of romance, murder mystery and women’s fiction. It does involve an unhappy marriage and murder with one man and a full romance with a second man that has a HEA. Crusie’s romance fans were divided in opinion over this book, many of them preferring her earlier series romances with a more fully blown humor angle. It is unusual for the publisher to wholly abandon the hardback’s cover when issuing the paperback but that is what St. Martin’s did. It is very clear with this new image that the publisher is actively going after her romance fans. It shows a sporty, older convertible with only the heroine’s legs showing from the front seats. The book does feature the heroine “parking, necking and more” with the hero in the book. This is her former high school flame so it harkens back to that time as well. This reminds me of the humorous, contemporary covers we’ve seen on Avon’s recent romances. Crusie’s name is also made huge so that it is easier for her fans to find her. Her name was very small and located on one of the candy hearts on the hardback.

Crazy for You hardcover 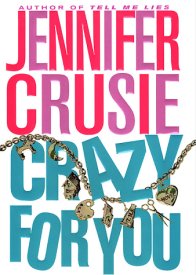 Crazy for You has been more popular with Crusie’s romance fans. It too is a blend of romance, women’s fiction and a trace of mystery. That trace is the heroine’s former live-in boyfriend who stalks her but there is never any question as to whom is the stalker. Readers feel that her humor is back in this newest novel as well. The publisher this time doesn’t even attempt understated on the cover. This one has the author’s name and the title in huge letters and bright colors. The title letters are also at angles with special emphasis on the “Crazy” word. Snaking through the letters of the title is a charm bracelet which has as its charms elements of the story. For example, the heroine is an artist so there is a palette. There’s a dog charm because a dog is prominent in the story. There is a charm heart indicating romance. Looking at this cover, I would know it was women’s fiction and probably romance. The stalking element could be implied by the “Crazy” and the scissors’ charm but that’s a stretch. If this were shelved in mystery, it would be inappropriate because the stalking is really not a full mystery within the novel. However, it would be appropriate to shelve it either in romance or fiction.