The Iconic Romance Tropes of Jane Austen by Leah Garriott 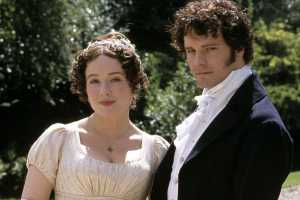 Hey everyone! I’m so glad to be at All About Romance today to chat about something near and dear to our romance-loving hearts—the tropes we love best, Jane Austen style.

There is one thing we romance genre-lovers know for certain, and that’s which stories we like to read over and over again. Enemies to Lovers? Yes, please. Marriage of Convenience? So much fun. Boy Next Door? Anytime.

It turns out Jane Austen used just such tropes in her own stories (though they weren’t termed such back then). Have you ever thought that perhaps your favorite Austen story has less to do with the writing and more to do with the trope she employed? Let’s look at her stories, beginning with first published to last. 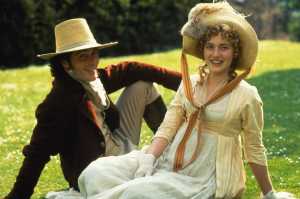 Sense and Sensibility (1810). Anyone here a fan of Love at First Sight? Because there are two of those in this book, featuring Elinor Dashwood and Edward Ferrars as the one that works and Marianne Dashwood and John Willoughby as the one that doesn’t.  (There’s also the Second Chance trope if we forget Willoughby and throw our hearts in with Colonel Brandon (Alan Rickman, anyone?)).

Pride and Prejudice (1812). Ah, the super fun Enemies to Lovers. I can never seem to get enough of this trope. And it seems like a lot of you can’t, either, since Pride and Prejudice is universally acknowledged as Jane Austen’s most beloved story. Mr. Fitzwilliam Darcy and Elizabeth Bennet go head to head, as any two characters should in an enemies to lovers story. There’s also another Love at First Sight with Jane Bennet and Charles Bingley which flourishes even as the couple is kept at a distance.

Mansfield Park (1814). If you love a good love triangle, Mansfield Park is the book for you. You’ve got the girl loves boy loves different girl triangle (Fanny Price loves Edmund Bertram who is infatuated with Mary Crawford) AND the boy loves girl loves a different boy angle (Henry Crawford falls for Fanny Price who is in love with Edmund Bertram). It even works with the more minor characters of two girls after the same guy (Julia Bertrum and Maria Berturm both falling for Henry Crawford). And in the end? There are people shacking up, eloping, divorcing, and marrying respectably. Talk about love triangle drama! 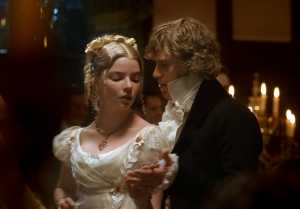 Emma (1815/1816). How often is it that we don’t realize what we truly have until something comes along to threaten what we’ve established? That’s the take in this Boy Next Door story, where Emma Woodhouse and George Knightley act more as brother and sister for most of the book (they are, after all, brother-in-law and sister-in-law). It takes two men showing an interest in Emma (Mr. Elton and Frank Churchill) and Emma showing an interest in one in return for Mr. Knightley to realize his feelings. And it takes Emma’s best friend vying for Mr. Knightley’s affections to realize she never wants anything to come between her and her boy next door.

Northanger Abbey (1817/1818). Not only does this contain all the hauntings of mysterious death, betrayal, and insult anyone would expect in a story centered around an old abbey, but it also contains all the romance of forbidden love. When Henry Tilney falls for Catherine Morland, he has to break with his father to choose her, but it isn’t until Henry’s sister marries well that Henry and Catherine are finally allowed to wed. 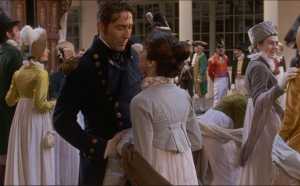 Persuasion (1817/1818). Though the enemies to lovers trope is usually what I reach for, Persuasion is my favorite of Jane Austen’s works. There’s just something about Second Chances that provides such satisfaction, especially when handled the way Jane Austen does.  There’s the pain of the first sighting after so long, the pretended disinterest, the awkwardness of being constantly thrown together, the choice of another man, and behind it all the pain of loving someone when all hope seems to be lost. And, of course, that letter Frederick Wentworth writes doesn’t hurt either!

There are so many other tropes out there. My own book, Promised, deals with a twist on the Marriage of Convenience trope with a fun Enemy to Lovers thrown in. What tropes are your favorites? Did you disagree with any I came up with for the Jane Austen books? I’d love to hear your thoughts!

Though she earned degrees in math and statistics, Leah Garriott lives for a good love story. Her debut novel, Promised, published by Shadow Mountain Publishing on February 18, 2020, received wide acclaim. She has resided in Hawaii and Italy, walked the countryside of England, and owns every mainstream movie version of Pride and Prejudice. She’s currently living her own happily ever after in Utah with her husband and three kids. Leah is represented by Sharon Pelletier at Dystel, Goderich, and Bourret. 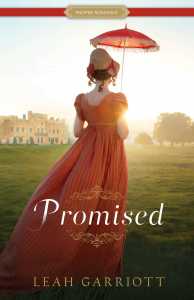 Margaret Brinton keeps her promises, and the one she is most determined to keep is the promise to protect her heart.

Fooled by love once before, Margaret vows never to be played the fool again. To keep her vow, she attends a notorious matchmaking party intent on securing the perfect marital match: a union of convenience to someone who could never affect her heart. She discovers a man who exceeds all her hopes in the handsome and obliging rake Mr. Northam.

There’s only one problem. His meddling cousin, Lord Williams, won’t leave Margaret alone. Condescending and high-handed, Lord Williams lectures and insults her. When she refuses to give heed to his counsel, he single-handedly ruins Margaret’s chances for making a good match—to his cousin or anyone else. With no reason to remain at the party, Margaret returns home to discover her father has promised her hand in marriage—to Lord Williams.

Under no condition will Margaret consent to marrying such an odious man. Yet as Lord Williams inserts himself into her everyday life, interrupting her family games and following her on morning walks, winning the good opinion of her siblings and proving himself intelligent and even kind, Margaret is forced to realize that Lord Williams is exactly the type of man she’d hoped to marry before she’d learned how much love hurt. When paths diverge and her time with Lord Williams ends, Margaret is faced with her ultimate choice: keep the promises that protect her or break free of them for one more chance at love. Either way, she fears her heart will lose.

I am so happy to see so many others love Persuasion best as well! While Pride and Prejudice is wonderful, witty and exciting, Persuasion has my heart. Maybe because it was the first Austen I had ever read or simply because it seems (to me) the most “real” of the books. It’s impossible not to sympathize with Anne Elliot who is consumed by her regret over allowing herself to be “persuaded” to do the “right thing” regarding Captain Wentworth. Seeing her come into her own during the course of the novel is a true delight and I don’t think there has ever been a more romantic and heart felt letter written than Frederick’s to Anne. Every beat of the story feels real and it is in my opinion, just perfection.

Yes and amen! And, of course, the sprinkle of humour with her ridiculous family – can any sisters ever be worse than Anne’s? And more comical? I think Mary Musgrove is one of JA’s best creations and is so much needed to leaven the tragedy, pathos and regret that nearly destroys Anne.

For me, Persuasion is the ultimate romance novel. The trope of second chance is one of my favourites maybe because I am an older reader – it’s probably not one that romance novel readers who are very young would hold in the highest esteem – you have to have love and lost (or at least badly screwed up!) at least once to appreciate it! I adored both the 1995 BBC production and the 2007 ITV offering. The pathos, the sadness, the inanely obtuse and selfish family, the bullying of Lady Russell, the marriage par excellence of the Crofts and the single-mindedness of love not lost or forgotten make this such a wonderful story and it plays so well on screen when handled with care and admiration.

I think one of the most touching lines is Anne talking about the “not very enviable” privilege she claims for women, that they “love longest” when hope is gone. That will make me cry every time I read it.

My favourites are P&P and Persuasion. Persuasion was my Yr12 English exam novel and I read P&P and Emma for the heck of it, knowing nothing of the plots except the famously brief blurbs on the back of the Penguin editions. I was reading ‘classics’, not romance novels, hence I did not expect Darcy to redeem himself or take it for granted that Anne and Wentworth would end up together, and Emma and Knightley were a complete surprise (this was before Colin Firth, Gwyneth Paltrow or Amanda Root inhabited the characters).

What I really love about the romance in Austen’s books is that you’re kept waiting until the end for the characters to be sure of each other’s love. In so many modern romances the characters are in love and they know it but there’s so much of the book still to go…. Even if they have to overcome external conflicts to be together, I’m half checked out once their feelings are settled, with the result that a lot of books are a slog to the end. I wish more authors would take the time to develop relationships slowly and allow their characters to see each other through through the eyes of people around them. Both of my favourite Austens show us the anguish of heroines realising they were wrong to judge; we feel their pain and their hope, and the delayed gratification makes the happy ending all the sweeter.

People are just too impatient these days it seems.

I blame internet and phones.