The King of Halloween and Miss Firecracker Queen by Lori Leachman

It is amazing how revealing and enlightening funeral celebrations can be. Long-held secrets may finally be shared. The truth of a particular situation is told. Long-simmering resentments are aired, or forgotten. Memories are resurrected. The nature of love is revealed.

I experienced all of these things at my father’s funeral in 2012. These revelations brought new context to my entire life. The King of Halloween and Miss Firecracker Queen is my effort to synthesize what I thought was true about my life and what I learned was true about my life, my parents, and their love story.

My father was the typical small town football star whose ticket out of Cartersville, Georgia was a football scholarship. My mother was a debutant wanna-be with captivating looks and a sense of herself. They met in the fall of 1956 at the Fall Football Banquet at the University of Tennessee. My mother spotted my father across the room and knew they had to meet. She worked her way into his space.

“Hello,” she said, cocking her head to the side and gracing him with her most coquettish smile. They chatted, and she offered him her number.

Whereupon he asked, in his rich Southern drawl, “Baby, how old are you?”

He stepped back, looked her up and down, and said, “Darlin,’ I don’t date anybody who’s not eighteen. Call me when you grow up.”

Since it was the week before Thanksgiving, Momma was not worried. Her birthday was November 27, two weeks away. Thanksgiving break came and went, and with it, her passage into adulthood.

Once back on campus in December, Momma ‘arranged’ to run into my father. Thus began their whirlwind courtship. Although Daddy had a long-time girlfriend from home, Gwen, Momma was not the least bit worried. She knew that she had the goods, and that Gwen did not stand a chance. As she revealed at Daddy’s death decades later, she chose him, and that was that. They were married four months later in Nowheresville, Tennessee by a local justice of the peace.

The King of Halloween and Miss Firecracker Queen chronicles my family’s rise through the ranks of competitive football, and my parents’ love story across fifty-plus years of marriage. It presents a look under the hood, so to speak, of the football life, and provides a profile of a marriage that was passionate and committed.

The last third of the book reveals my family’s struggle to deal with my father as his mental capacity was deteriorating from Chronic Traumatic Encephalopathy (CTE). It also presents a picture of my mother’s steadfast love and devotion to my father and his care as his life as he knew it was slipping away. It is a story of courage, love, and what it means to make a commitment and live by it, no matter the costs. 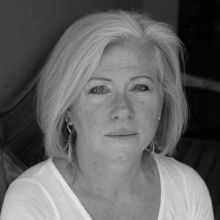 Lori Leachman is a professor of economics at Duke University. She has published over twenty articles in a variety of academic journals, and has presented her work at a variety of professional conferences such as the American Economic Association Meetings, the Southern Economic Association Meetings, the Conference on Global Finance, and the Napa Valley Seminar. She has been interviewed on NPR and The State of Things. She has been in Who’s Who of America’s Teachers, won the 1995 Student Award for Teaching Excellence at Northern Arizona’s College of Business, and won the Howard D. Johnson Teaching Award at Duke University in 2002/3. She is daughter of a football coach, and a Southerner by birth. She resides in Durham, NC.