The Ojibway Circle: A Guest Post by Maggie Blackbird

I find when I’m too familiar with something, I forget to see the beauty in familiarity.  Growing up on the rez, the huge, beautiful lake surrounding the community where I swam or ice-skated as a child was familiar.  The big hill full of trees, rocks, and even a small canyon where my sisters and I played as kids, whether tobogganing or engaging in a game of hide and go seek, was familiar.  Being too acquainted with the people and the place, I wanted to explore the town, a mere walk up the highway from the reserve, and I did.

I took for granted the beauty and simplicity of life at a First Nations community aka Indian Reserve.  I also believed everyone knew what a band office was, Treaty Day, status and non-status, on and off reserve, Bill C-31, and even how housing worked at the community level.

I grew up knowing how our governing system operated, because my dad had served on band council many times, as did my grandpa, and my great-great-great grandfather was one of the chiefs who signed our Treaty.  So I naturally assumed if I knew this, everyone else did, too.

Having always made up stories, even when I was away at school furthering my education, I slipped off into the world of writing.  The Boys from the Bay came to life in those stories.  This excited me.  I yearned to make my hobby a reality, and share with the world what I’d discovered.

My writing mentor thought differently.  By this time, I’d been working for an aboriginal organization that took me all over the Treaty area (twenty-five reserves that signed the one Treaty together).  Ecstatic, I signed up for a correspondence course with the chance to work with a real author.  But he kept pushing me to write what I know.

“I’m Ojibway.  Who’s going to want to read romance stories about my people,” I glumly thought.  Rebellion kicked in and I drifted away from my writing course and writing mentor.  Why couldn’t I write about the unknown?

But the more my dad spoke to me about life on the reserve before my time, the longer I worked for the aboriginal organization, and even married a wonderful man from my band, I began to see the beauty in the familiar.  So much so that I thought, “Why not write romance starring Canada’s Indigenous People—especially about real-life issues happening at the community level?”

The Anishinaabeg come from all walks of life, and there are so many stories to tell.  We have different beliefs, some atheist, others agnostic, a lot who are traditional, those who belong to twelve step recovery programs, and Christians.  Why not write about those beliefs?

My husband’s a pharmacist and we own a dispensary based out of the aboriginal health access centre located on the reserve.  Health care professionals would make awesome characters.  Or what about the secondary and post-secondary aboriginal institute my older sister works for?  Educators would make awesome characters.  Then there are politicians, First Nations constables, firefighters (yes, I volunteered as one before my husband and I bought a home in the country), employees at the band office, those living off-reserve.  The list was endless.

Today, as I type, I’m baking two big tins of beans to take to the multi-use centre on the rez for a benefit dinner.  It’ll be a half an hour drive to the community where most of my family and my husband’s family still live.

I’m glad I walked the circle, because as they say in the Ojibway world, “There is no ending, only another beginning.”  And I’m going back to the beginning this afternoon, where I was raised, a place I will always love and call my true home.

I’m giving away a copy of Blessed, my first book in the Matawapit Family trilogy and newest release from eXtasy Books, to one lucky commenter.  You’ll have your choice of ePUB, PDF, .mobi, or prc.

Blurb:  A mixed-blood Catholic seminarian struggles to discern his true calling:  the priesthood or his ex-lover, a proud but damaged Ojibway man.

It’s been ten years since Emery Matawapit sinned, having succumbed to temptation for the one thing in his life that felt right, another man.  In six months he’ll make a life-changing decision that will bar him from sexual relationships for the rest of his life.

Darryl Keejik has a decade-long chip on his shoulder, and he holds Emery’s father, the church deacon, responsible for what he’s suffered:  the loss of his family and a chance at true love with Emery.  No longer a powerless kid, Darryl has influence within the community—maybe more than the deacon, and he intends on using his new-found power to destroy Deacon Matawapit and the church.

Hoping to save the church, Emery races home.  But stopping Darryl is harder than expected when their sizzling chemistry threatens to consume Emery.  Now he is faced with the toughest decision of his life:  please his devout parents and fulfil his call to the priesthood, or remain true to his heart and marry the man created for him. 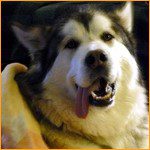 An Ojibway from Northwestern Ontario, Maggie resides in the country with her husband and their fur babies, two beautiful Alaskan Malamutes.  When she’s not writing, she can be found pulling weeds in the flower beds, mowing the huge lawn, walking the Mals deep in the bush, teeing up a ball at the golf course, fishing in the boat for walleye, or sitting on the deck at her sister’s house, making more wonderful memories with the people she loves most.

Ditto Keira, Maggie. Thanks for stopping by. It sounds like you have more than a few interesting stories to tell. I’m looking forward to reading them! When is Blessed available?

Hi Nblibgirl. Blessed is now available. It was released July 6th. Thanks for taking the time to comments. It’s really appreciated.

Hi Keira. I’m glad you enjoyed the post. It was lots of fun to write it. Thanks for commenting. It’s very much appreciated.

I’m ridiculously excited about this book.

I grew up in Canada, and I spent a lot of time reading First Nations literature and history as part of my undergrad Women’s Studies program. Just reading the description of your book feels like a shot of the familiar.

I’m also a sucker for books that weave culture, history, and place in as integral parts of the plot.

Hi Robin. Thanks for stopping by and commenting. It’s very much appreciated.

This sounds absolutely beautiful; Looking forward to reading it later!

Thanks for stopping by and commenting, Lisa, and for your kind words.

M/M? First Nations people? Sign me up! I remember many years ago stumbling on Kathleen Eagle’s Reason to Believe and This Time Forever. and thinking how wonderful they were. This one, Blessed, sounds very interesting.

Good hearing from you, stl-reader. I’m glad you stopped by.