The Wayback on Wednesday: The Harem 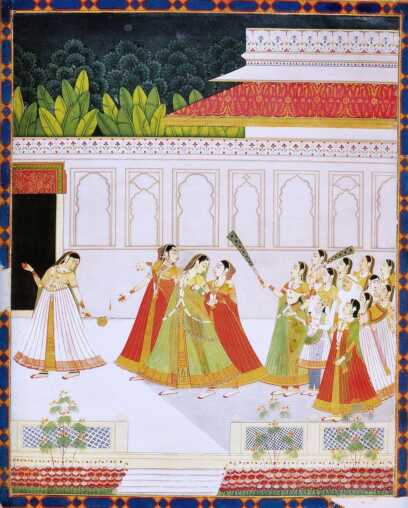 Simply defined, a harem is the area in a household where the women of the family live. But in romantic imagination, it is so much more. For many years movies, books and paintings have romanticized the harem. What a life. You ate delicious food, wore silken clothing, lived in beautiful surroundings and made passionate love to a handsome Sultan at night. Well, the food was good, the clothes were silk (and covered you from head to toe), the surroundings were beautiful (but you could not leave them) and as for making passionate love to the Sultan – let’s just say that for most of the harem women, the odds of that happening were not good.

The picture of a harem that most of us have in our minds is the harem of the Sultan in Constantinople during the height of the Ottoman Empire. Doreen Owens Malek’s book The Panther and the Pearl gives a picture of life in a harem toward the end of that time that is quite accurate. The Sultan, who was an absolute ruler, had a harem of several hundred women along with eunuchs to guard them. Although all the harem women, from the mother of the Sultan to the lowest kitchen maid were technically slaves, they were not of equal rank, and rank was guarded jealously in the harem.

The highest ranking woman was the Valide Sultana – the Mother of the Sultan. She had her own apartment and wielded power over the harem inhabitants and even over her son, since she could choose some of his concubines for him. The next highest rank belonged to women who had given birth to the Sultan’s children. These women were called kadins and they had their own households with their own slaves. The highest ranking kadin was the mother of the Sultan’s oldest son. But being the mother of the oldest son did not necessarily make one the Sultan’s favorite. Jealousy among the kadins and concubines led to intrigue, attempted poisoning and downright assassinations. Small wonder that a food-taster was a necessary part of the harem. The vast majority of the women in the harem were called odalisques. Depending on their beauty and skills, they were concubines, entertainers, or general servants. Some odalisques were given by the Sultan as wives to territorial governors, a mark of favor on his part and an honor to the odalisque.

The harem was under the supervision of the Kislar Aga – the Chief Black Eunuch. He was the third highest ranking man in the Empire after the Sultan and the Grand Vizir. The Kislar often became very wealthy (from bribes) and wielded much power. The Kislar was the official who executed a woman if she displeased the Sultan. He had a corps of eunuchs who served under him. These eunuchs waited upon and guarded the women of the harem, were all Black, and were chosen for their supposed ugliness. But beauty is always in the eye of the beholder and attachments between the women and the eunuchs were not unknown.

The harem women seldom went outside its walls and when they did they were heavily veiled. Inside the harem they could play various games, smoke the turkish water pipe, eat (and the food was very good), dress up, or indulge in the favorite activity – spending hours in the bath.

A bath in the harem was not just lathering up and then rinsing off. From descriptions I’ve encountered, a bath was akin to a day at a spa. The women were soaked, depilitated, massaged, steamed and hennaed until they glowed. For women who had lots of time and not a lot to do, a long period of being pampered in the bath was a relaxing way to pass the day.

But one couldn’t bathe all the time, and for most of the harem women, life was very dull and very boring. And forget any fantasies of non-stop sex. For most of the harem women, sex was a very rare thing. Since not very many of them ever slept with the Sultan, the women sometimes formed lesbian relationships with each other or developed sexual relationships with the eunuchs.

How? Well, there were degrees of castration. A eunuch might have lost his testicles but still have his penis intact. He could have sexual relationships with women, and since that was the case, a eunuch of this type did not directly serve the harem women. Instead he would serve the Sultan or the male officials in the Sultan’s household. Yet, even eunuchs who were totally castrated sometimes formed relationships with the harem women. There were many sex aids to be found at the marketplace. Sexual relationships with eunuchs were against all rules and a woman risked death if the relationship became known, but rules have never bound the human heart.

If the Sultan took it into his fancy to sleep with one of the women, she was prepared by spending a long period of time in the bath. She entered the Sultan’s bedchamber and crawled under the covers from the foot of the bed. The next day, she went through his pockets since custom dictated that all the money and jewels he brought into the bedchamber were hers. If she pleased the Sultan, she might become one of his regular concubines, and if she bore a son nine months later, she would achieve the title of kadin. For many of the women, that one time in the Sultan’s bed might be the only time.

Since the Sultan was the absolute ruler over his kingdom, he had the power of life and death over the harem. If a woman displeased him, the usual method of execution was to have the Kislar tie her in a sack and throw her in the ocean. The insane Sultan Ibrahim (1640-1648) drowned his entire harem when he heard that one had been having a relationship with a eunuch. One of the odalisques swam free and lived to tell the tale.

The fate of the harem women when the old Sultan died and the new one came to the throne was a sad one. They were forced to leave the Grand Seraglio and move to smaller and much drabber quarters called The Palace of Tears, where they lived out their lives in isolation.

The harem of the Sultan was abolished after the Ottoman empire fell, but it still lives on as a romantic fantasy in some people’s eyes. Somehow I don’t think the isolated and almost celibate life of the majority of the women who lived in the harem is all that romantic, but when has real life ever gotten in the way of a good story?

Bertrice Small made harems a staple of her books. Every (female) person in Skye O’Malley’s family (plus a number of other books) ended up in a harem at one point in their lives.

I haven’t read one of those in a while but as I recall she did her research and included all kinds of details including the hierarchy in the harem of both the eunuchs and favorites/wives.

Johanna Lindsey had one book where there were twin brothers? One was raised in England and one was the Sheik with a harem and the English raised brother impersonated the other brother for political/safety reasons for a while. But her books weren’t as well researched as Small’s were.

For all of Small’s over the top plots and purple prose her history was usually pretty well researched and solid.

Can anyone else remember the 1980s TV miniseries Harem, starring Art Malik, Nancy Travis and Omar Sharif? It was an experience!

I confess to really enjoying it back in the day. Cheri Lunghi, Ava Gardner and Julian Sands had supporting roles too. I’ve always loved a costume drama.

The heroine in Loretta Chase’s Don’t Tempt Me was kidnapped as a child and spent years in the harem. She didn’t make it sound at all appealing.

I was thinking of her. That book, a Minerva Spencer book, and The Price of Innocence are the only books I’ve read with harems in them.

Very interesting column from Ellen. Although one initially, as a modern western woman, despises the concept of the harem, it still does fascinate. I had a look at The Panther and the Pearl (and its sequel The Panther) and am tempted as both can be found as kindle books. However, I am thinking this over because I know I will be both enraged and enraptured and not sure if that’s what I want/need right now. Maybe I’ll just put them on the TBB list for now.

The Panther and the Pearl is cheap. I bought it and will report back!