It’s great to be here at All About Romance talking about my latest release, Cold Secrets. My books tend to be gritty Romantic Suspense novels—sexy, but heavy of the suspense (one of my best friends call them ‘plotty’)—and this one is no different. Cold Secrets features the FBI taking on sex traffickers and starts with a bang.

When an international ring of sex traffickers kidnaps an eight-year-old girl in Boston, FBI Agent Lucas Randall heads undercover. But his rescue operation goes disastrously wrong and Lucas barely escapes with his life. Now the ruthless traffickers are hunting him down, along with everyone else who threatens their operation.

Computer expert Ashley Chen joined the FBI to fight against evil in the world—evil she experienced firsthand. She has mad skills, and deadly secrets, and once she starts working with Lucas, she also has big trouble, because after years of pushing people away, she’s falling for the guy. The feeling is more than mutual, but as Ashley intensifies her online pursuit of the trafficking ring, her traumatic past collides with her present and suddenly Lucas can’t tell which side she’s on. And as the case escalates into a high-stakes game of cat and mouse, it turns out Ashley isn’t the only one with something to hide.

I’m giving away an ebook of the Cold Justice Series Box Set: Volume I: Books 1-3. Just make a comment below to be entered in this drawing.

I actually wrote the book while traveling around the world with my family. My husband is a biology professor and he was on sabbatical, working in Japan for three months. We have two teens so the four of us set off to live in Greater Tokyo for part of the year. None of us spoke the language.

Can you say culture shock? It’s amazing how odd it can be to never (or rarely) have a normal conversation with people outside your family, and to constantly hear a foreign language spoken. Japanese is quite a piercing language, with heavy emphasis on the “a” sound. I just about mastered “thank you.” It’s given me a better appreciation for people who move from a non-English speaking country to here.

The Japanese people were lovely, very friendly and eager to help. One weird thing that sticks in my mind is one day we walked through the mall to the train station just as the shops were opening. All the shopkeepers stood in their doorways and bowed as we walked by. It was a little bizarre, but also very interesting.  The other funky thing about the shops was the groceries. Food is expensive! Actually, everything is expensive in Japan. You could buy bread by the slice, half a lettuce, or one octopus tentacle. Conversely, the fruit there is massive and individually wrapped. They had apples the size of grapefruit, and a small packet of giant grapes cost more than a bottle of wine.

One thing we had to get used to was the constant crowds. Any viewpoint had to be admired and absorbed while standing next to four hundred of your closest friends. In three months we managed to see a lot of Tokyo, and did side trips to Nikko, Kyoto, Hiroshima and Koyasan. It was definitely an experience we’ll never forget and that I hope to use in future stories. After that, we visited Dubai and Zimbabwe, but that’s a whole different story.

Here’s a little teaser from the book…

She walked toward him and he forced himself not to move. She was only a few inches shorter than he was which was a change from the women he usually dated. Her hands rested on his chest as she eased up to kiss him. Her mouth was soft and sweet, and tasted like bourbon.

He wanted to unwrap that shirt from her body and drag her off to bed. But it didn’t matter how long it had been, this was a really bad idea.

As she was about to pull away, he cupped her face and took the kiss deeper, feeling the surprise, followed by the searing heat of her response. Her breathing hitched as her tongue met his. He fitted her more closely against him, his calloused fingers rough against the slippery satin of her blouse. Her arms wound around his neck and her hands sank into the hair at his nape. She was hot—body, face, mouth. His body begged him not to pull away, not to stop, but he did it anyway, and stared down into her pretty eyes.

“What was that for?” he asked gruffly.

“Curiosity.” Her lips were reddened from their kiss. Her honey skin held a flush of scarlet. “I wanted to see if you tasted as good as you looked.”

She pulled away and walked over to where she’d dumped her laptop and coat. Picked them up.

He made himself stand very still as she walked away. Made himself accept that the kiss had been enough.

She opened the door and looked over her shoulder. “Better.”

Then she closed the door, severing the connection. And he knew a kiss was never going to be enough. 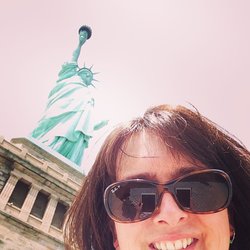 New York Times and USA Today international bestselling author, Toni Anderson, writes dark, gritty Romantic Suspense novels that have hit #1 in Barnes & Noble’s Nook store, the Top 10 in Amazon and Kobo stores, and the Top 50 in iBooks. Her novels have won many awards.   A former Marine Biologist from Britain, she inexplicably ended up in the geographical center of North America, about as far from the ocean as it is possible to get. She now lives in the Canadian prairies with her Irish husband and two children and spends most of her time complaining about the weather.   Toni has no explanation for her oft-times dark imagination, and only hopes the romance makes up for it. She’s addicted to reading, dogs, tea, and chocolate.   If you want to know when Toni’s next book will be out, visit her website (http://www.toniandersonauthor.com) and sign up for her newsletter. If you want to read other fascinating stories about life in a city that, during winter, is sometimes colder than Mars, friend her on Facebook: (https://www.facebook.com/toniannanderson).

I have read all your books and enjoyed them tremendously.

I have read all your books and enjoyed them tremendously. They just keep getting better. Keep them coming.

I can’t wait for this to come out on audio as that is my favorite way to read these. Your stories as so perfect for audiobooks.

My new favourite Author. Have read most of her books in the last half year and can’t wait for more to come! Definitely on my just buy list!!

Ms Anderson is a new-to-me author. I look forward to reading her books. As for living in Japan, it’s all about perspective, right? After having done a year in Japan as an exchange student, the thing that hit me upon coming back home was that everything was HUGE! The streets, the cars, the people,….the burgers! :)

I’m new to your site and have become an instant fan.

I really enjoyed reading and listening to Toni’s books. Just like to wish her all the best the the new release

I have all the books so not trying for prize but had to say how much I love this series! Every books is so different from the rest but they are allllll great! I have sometimes severe anxiety problems and have to limit my reading but the Cold series is so great that I have to read them no matter how tense they get.

wpDiscuz
You are going to send email to
Move Comment