An Interview with Rhys Bowen 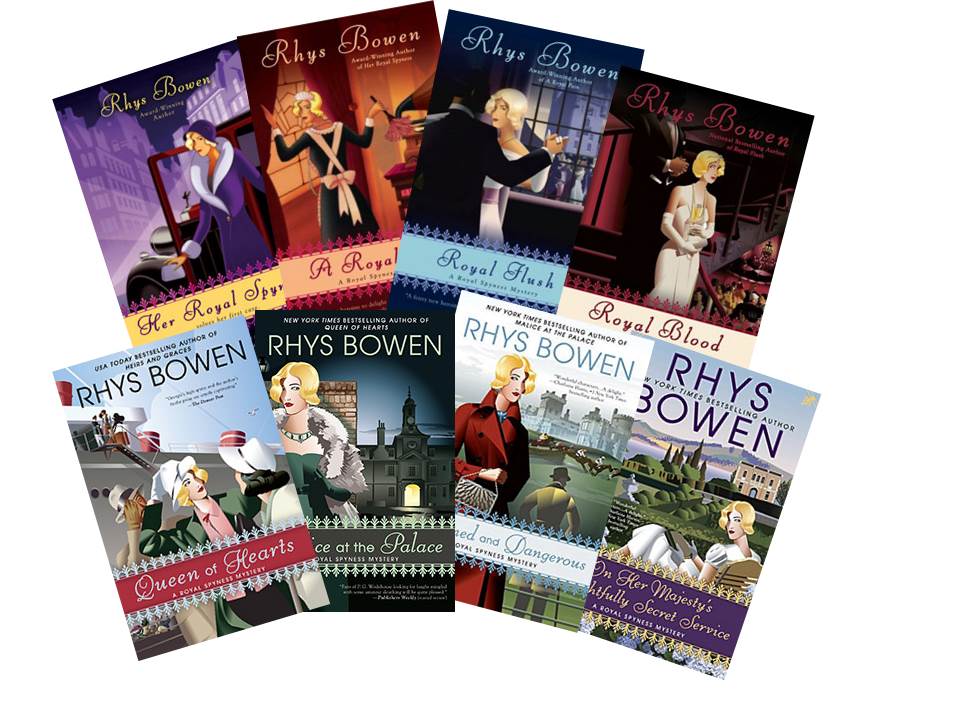 Over the years, I’ve read and thoroughly enjoyed a number of Rhys Bowen’s Royal Spyness, Molly Murphy and Constable Evans books – she really is a master of the quiet, cleverly plotted mystery.  I was especially intrigued by the synopsis for her latest book, In Farleigh Field, as it represents something of a new direction for her.  Set in Kent during World War Two, it involves MI5, Bletchley Park, codebreakers… and a mysterious airman.  I was delighted that she was able to join me for a quick chat.

Keira Soleore: Welcome to All About Romance, Rhys. We’re delighted you could join us.

Rhys Bowen: Thanks for inviting me.

KS: World War II is a new setting for you. Is using something that you’ve always wanted to do? And what was the impetus behind the book?

RB: I’ve always been fascinated by World War Two. It affected my own family with my father and uncles all fighting abroad. I felt the effects of it as I was growing up in the austerity of the immediate postwar period – rationing, bomb sites, scrimping, and saving. Life was hard. And to me this war was the last time we had a clear vision of good and evil. If evil wasn’t stopped, it would swallow the world.

KS: I’m a huge fan of British-set historical fiction. Your depiction of Pamela’s family life and the war pressures on the nobility feels very true to me. Your husband comes from an aristocratic family, so did you find that you were able to gather enough detail from your own life and from his extended family to accurately depict life at Farleigh Place? Or did you have to do extensive research?

RB: A lot of it comes from my own experience. I know the way these people talk and interact. I know how they still see the class system as important. I’ve stayed at big houses. And I’ve heard many personal experiences of the war from my family and from my husband’s family. However, I did read personal accounts of life at Bletchley, life in MI5, and the war diaries of housewives. I also visited Bletchley Park, Churchill’s war rooms, and the Imperial War Museum.

KS: You’ve set the story in Kent. The bucolic setting acts as a sharp contrast to the presence of soldiers on the estate. Was there a particular reason for this location?

RB:Yes. I grew up about ten miles from where this book takes place, so I have a complete vision of how the area looks. And it is bucolic and lovely, with gentle farms and valleys. There are two real stately homes in the area: Penshurst Place and Knowle. I used them as inspiration for Farleigh.

KS: You chose to not have Lord Westerham travel to London when the Parliament was sitting. How did you decide what he does with his time at Farleigh with the Royal West Kents regiment billeted there?

RB: Many aristocrats like Lord Westerham only attended the House of Lords when it suited them. Some thought going up to London was unbearable and stayed home. What he would do with his time would be to make sure the estate was still running in spite of the fact that many of his staff had been sent to war, lead the local Home Guard in their drills, and generally let himself be seen to keep up morale. Aristocrats didn’t actually ever do much!

KS: It is very interesting to see how independent and clear-sighted Pamela is in her loyalties and patriotism. Were many young women of her age involved in the war effort? Did they work outside their homes because they believed that they could make a difference, or was it because they were almost forced out of their homes, since the men weren’t around to do those jobs?

RB: Everyone had to undertake some kind of war work. Young women worked in munitions factories, as land girls on farms, doing clerical work for the armed forces, in canteens serving meals to troops, and, it appears, as spies. They also had to take on all the jobs that men had vacated, sometimes rising to quite powerful positions. It was interesting to me to find out that Bletchley Park actually recruited debutantes and upper class girls because they were brought up to do the right thing. They would not crack under pressure or blab about their work. Pamela is a good example of this. She has been raised to set an example and do her duty. But everyone in England seemed to have that spirit that everyone had to do their part to win the war.

KS:Your story spans various social classes. Did you find that class rules changed during the war, becoming less rigid and permitting movement between the classes? Did patriotism and having a common goal of wanting to defeat the Germans lead to this change?

RB:I wouldn’t say that the war actually changed the class rules. Men of the upper classes, who went into the armed forces, were usually made officers. Lord Westerham would have been in charge of the local Home Guard unit. It was expected that the ruling classes rule. I think it took until after the war when soldiers came home and said, “I am not going back into service,” and there were new opportunities, that the class system began to crack. However, it is still there. Remember – William and Kate broke up because it was deemed that her mother was too lower class!

KS: I’m hearing rumors that you’re going to be writing another book set during World War II. If so, that’s rather exciting. Will it be in the Farleigh Field world or set elsewhere? Will some of the same characters make an appearance in your new story?

RB: No, quite different. I may go back to Pamela and Ben later, but I didn’t want it to be a series. The new book takes place mainly in Tuscany and involves two time periods: what happened to an English pilot in the war and his daughter’s story in 1973. But it is a British noble family again. I keep coming back to that!

KS: When you’re not working, what do you like to do? Over the years, which books would you say have stayed with you?

RB: I love to travel. We go to Europe every summer – last summer Britain, Tuscany, and the Italian lakes (all for research!).  I hike, sing in a choir, love to sketch, and do crafts like beading and knitting. And I love being a part of my grandchildren’s lives. Books that have stayed with me: The Lord of the Rings, which I have re-read every six months for many years now, Tony Hillerman’s books, the best Agatha Christies and Dorothy Sayers, Connie Willis’s Doomsday Book, A.S Byatt’s Possession… you’ll see that I read across the board!

KS: Thank you so much for making the time to answer my questions, Rhys. I have really enjoyed your writing. I’m a fan of stories with dual timelines, so I’ll be sure to watch out for your next book.

RB: Thank you. These were fun questions!

Rhys Bowen is the New York Times Bestselling Author of the

Royal Spyness Mysteries, Molly Murphy Mysteries, and Constable Evans. She has won the Agatha Best Novel Award and has been nominated for the Edgar Best Novel. Rhys’s titles have received rave reviews around the globe.

Rhys currently writes two mystery series, the atmospheric Molly Murphy novels, about a feisty Irish immigrant in 1900s New York City, and the funny and sexy Royal Spyness mysteries, about a penniless minor royal in 1930s Britain. Her books have made bestseller lists, garnered many awards, nominations, and starred reviews. She was born in England and married into a family with historic royal connections. She now divides her time between California and Arizona.

I’m an amateur student of medieval manuscripts, an editor and proofreader, a choral singer, a lapsed engineer, and passionate about sunshine and beaches. In addition to reviewing books for All About Romance, I write for USA TODAY Happy Ever After and my blog Cogitations & Meditations. Keira Soleore is a pseudonym.

I really love Ms. Bowen’s books! I’ve read all the Constable Evan Evans books and am slowly (very slowly) working my way through the Royal Spyness and Molly Murphy mysteries. I’ve got Farleigh Field on my kindle right now and hope to get to it sometime soon.

In Farleigh Field is a departure from the Royal Spyness style but I find it fascinating how well Ms. Bowen is able to write such different types of stories. I’m waiting to read her next standalone story.

Looking forward to reading this book. The Imperial War Museum is a must-visit once in London. But I actually preferred the Wartime Tunnels exhibit at Dover Castle to the Cabinet War Rooms. ;)

Oh, how exciting to see those escape tunnels. I wonder how many such tunnels were built in England in the 20th century especially along the coastline. I know many medieval castles also had them.