An Interview with Sally Malcolm

I’m really pleased to be welcoming author Sally Malcolm to AAR today.  Back in August, her first m/m novel, Perfect Day, was published by Carina Press, and I was utterly enchanted by both the characters and her writing; the novel is a modern-day retelling of Jane Austen’s Persuasion, and yet, as I said in my review, Ms. Malcolm managed to keep to the spirit of the original while imbuing her characters with distinctive lives and personalities of their own.  Her recent seasonal novella, Love Around the Corner was a similarly superb read; another reimagining (this time of a classic movie), it’s simply… lovely, doesn’t seem strong enough a word to describe my feelings as I read, but it really is the only word that will do.  Now, she’s returning to the fictional Long Island resort of New Milton that featured in those two books with Between the Lines, an enemies-to-lovers romance between a property developer and a prickly hotel owner.

I asked Sally to hop over to AAR for a chat to tell us a a bit more about herself and what she’s got in the pipeline; thanks for joining us!

SM: Hi Caz, thanks for having me. It’s exciting to be here!

CO: You’ve received a lot of excellent reviews for your first published m/m romance, Perfect Day, which was a modern retelling of Persuasion.  I’ll ask you about that in a minute, but first of all, give us a bit of background about you and your writing.

SM: Like many writers, I cut my teeth writing fan fiction—starting with ER, moving on to Stargate SG:1, The West Wing, and Supernatural. And I’m still a huge fan of fanfic!

CO: Yes, fanfic is where we first met all those years ago!  Full disclosure, Sally and I have known each other “virtually” for over a decade – we first bonded online over our shared love of The West Wing :)

SM: We did! :) My first published works were for Stargate SG-1, writing tie-in novels for MGM. But I’ve always loved romance. I published a m/f historical romance back in 2015, called The Legend of the Gypsy Hawk, but couldn’t quite find my feet in the romance genre. Then I discovered m/m romance (thank you K.J. Charles!) and became completely obsessed. Perfect Day was my first published m/m romance—hopefully the first of many!

CO: By a strange coincidence, yours wasn’t the only m/m modern-day version of Persuasion that was published this year!  What appealed particularly about that story – why choose that rather than another of Jane Austen’s novels to update as an m/m romance?

As for why I chose Persuasion, first off I’m a huge fan of all Jane Austen’s books. I’ve read them countless times, watched all the adaptations, stage plays—everything.

Like everyone, I love Pride and Prejudice, but I’ve always felt that Persuasion is the most romantic of Austen’s novels—it’s the only book solely about love and its power to endure, even when all hope is gone. For me, it’s the ultimate second chance romance, which is one of my favourite tropes. I’m a sucker for angst-with-a-happy-ending, and Persuasion delivers that in spades—hopefully Perfect Day does too!

CO: Well, I think it does – especially after seeing Josh and Finn again in both Love Around the Corner, and Between the Lines. Which is your next release from Carina Press and takes place in the same location as Perfect Day.  Tell us a little about that.

SM: Between the Lines is a book close to my heart. It’s about Theo Wishart, a property developer, and Luca Moretti, whose family hotel Theo wants to redevelop. Luca’s at odds with his mom and her new husband, who want to sell the hotel, and is determined to derail Theo’s plans. But when Luca’s mom invites Theo to stay at the hotel for a couple of weeks the two guys find themselves drawn to each other despite their conflicting visions for the hotel’s future…

CO: I loved that premise, and now I’ve read it, I have to say I loved the book, too.  What made it such a personal endeavour for you?

SM: What makes Between the Lines special for me is Theo. For a while I’ve wanted to write a character who has dyspraxia, which is a developmental coordination disorder that my daughter also has. It affects people in widely different ways, but for my daughter (and Theo) it primarily impacts physical coordination and certain social skills.

Watching my daughter grow up with dyspraxia made me want to write a character who shared some of her challenges, but what I definitely didn’t want to do was write a book about dyspraxia or write a character whose dyspraxia was their character. I hope I’ve achieved this with Theo—dyspraxia is part of who he is, it impacts how he interacts with the world, but it doesn’t define him. I based Theo’s experience of the condition on my daughter’s and she kindly read Between the Lines to make sure I was getting it right—although she did refuse to read the sex scenes. (Let’s face it, nobody wants to read sex scenes written by their mother?!)

CO: Hahahah!  I can completely understand that!

CO: You’re a Brit, like me… what made you want to set these stories in the US?

SM: When I was thinking about writing Perfect Day, I wanted the setting to take the story as far away from the original as possible. I was keen to reimagine Persuasion, rather than retell it, so you probably noticed that I stripped out some of the elements that were harder to translate into the 21st century. As part of that, I decided that setting it outside the UK would help distance it from Regency England. And I’ve written a lot of American-set stories over the years, so I’m relatively confident of being able to carry it off—plus, having an American editor helped me avoid any glaring Briticisms.

In Between the Lines, I actually made Theo British—just for the fun of being able to write my own dialect. Although Theo’s lived in the States for quite a few years, so he’s kind of bilingual!

CO: What do you do when you’re not reading or writing?  Do you have time to read for pleasure?

SM: The short answer is, since reading and writing are my favourite things to do, I tend to do them both as much as I can. I’m the sort of person who finishes one book and immediately jumps into the next one—and that goes for both reading and writing. I feel like an addict at times!

When I am dragged away, I enjoy the movies and the theatre (when I can afford it). I have a couple of history degrees, so I’m always interested in politics and history and will drag my family off to see particularly interesting exhibitions. Living in London means there’s a lot to see.

CO: Can you tell us a little about what you’ve got in the pipeline?

Well I’ve just released a Christmas novella, also set in New Milton, called Love Around the Corner—which is about two guys who are enemies in real life, unaware that they’ve fallen in love online. It’s fun and sweet and very Christmassy!

Up next is a project I’m calling Last Kiss, which is set in 1919 and is about two British soldiers who met and grew close on the Western Front. The Honourable Mr Ashleigh Dalton is an upper-class officer who lost a leg in the fighting, and Harry West is the man who saved his life. The story is set just after the end of WW1, when Harry, unemployed and desperate, comes to work for Ashleigh’s father at their house in the country. Ashleigh, angry and traumatised by his wartime experience, finds solace in his renewed friendship with Harry. But a friendship across the boundaries of class—never mind the intense love affair Ash and Harry embark upon— is impossible in the eyes of Ashleigh’s aristocratic family. And storm clouds soon threaten the fragile happiness the two men have found in each other’s arms…

I’m planning to finish Last Kiss over Christmas and will publish it next year. It’s another book I’m passionate about, so I hope readers will love it too.

CO: I’m a bit of a WW1 buff myself, so that sounds like something I’ll be eager to snap up!  Sally, thanks for joining me at AAR today – it’s been great to chat, and I wish you every success with future books.

SM: Thanks so much for having me, Caz, and for the great questions—it’s been really fun!

Theo Wishart has given up on finding love.

A handful of summer days may change their lives forever—if they’re brave enough to look between the lines.

Eyes might be windows to the soul, but for Theo Wishart they’re all shuttered. His dyspraxia makes it hard to read people. He doesn’t do relationships and he certainly doesn’t do the great outdoors. Two weeks spent “embracing beach life” while he tries to close the deal on a once great, now fading seaside hotel is a special kind of hell.

No mushy feelings, no expectations, and no drama—that’s the deal. A simple summer fling. And it suits them both just fine. But as the summer wanes and their feelings deepen, it’s clear to everyone around them that Theo and Luca are falling in love. What will it take for them to admit it to themselves—and to each other? 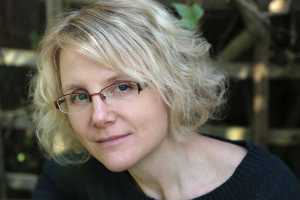 Sally writes emotional and sweetly angsty romances, always with a happy ending. Perfect Day was her first published male/male romance, with Love Around the Corner and Between the Lines following swiftly behind. She lives in London with her American husband, two lovely children, and two lazy cats.

This looks great! I’m going to have to pick it up.