Confessions of an Anxious Writer

I think I was probably always a bit of a worrier. When my first baby was born, however, the worry kicked into high gear. And when my second baby was born, maybe it got a little bit worse. And then, it became enough of a thing that I suspected it was more than what most people dealt with.

I’ve slowly learned to manage it, but I especially had to come to terms with it when I was writing Worst Case, my new YA romance, just released in January.

Who suffers from anxiety, and then decides to write a book about an anxious daughter and her VERY anxious mom?

Maybe some part of me thought it’d be a great way to exorcise the anxiety demon. And it has helped, I think, because I, really, in the grand scheme of things, have a pretty mild case. I am able to go out in public, I can go to my job, and it doesn’t take over my life or tighten its grip on my brain to a point where I am paralyzed, most of the time.

I’ve had a few total panic attacks that involved my sons. And for some reason, family trips seem to trigger an irrational anxiety that tries to choke the fun out of our vacationing adventures. There have been times driving on vacations that I had to pull over and let my husband drive, and then there are the times when I have to drive because I’m so anxious, I need something to distract me from it (I know, it makes no sense. If it were rational, people, it wouldn’t be anxiety).

Those attacks on vacations led me to write Worst Case. It got me thinking about people whose anxiety has shaped how they relate to other people. I wanted to explore how a mother-daughter relationship would survive when anxiety was another piece of the puzzle. And I really wanted to know what would happen if the daugher happened to meet a new boyfriend who took pleasure in adventure-seeking and risk-taking.

I mean, love is all about risks, and look what we call it — FALLING in love. The very way we talk about it implies that a person is taking a chance, risking injury, falling, no less. What if the person she falls for likes living in the moment and doing physical things that might not be totally safe?

For me, physical activity and connecting to the outdoors is one way to loosen the grip of anxious feelings. When I was a kid, we went off into the woods, and our moms had to just trust that we were going to return in one piece. I fell over a barbed wire fence and sliced my leg open, and my mom let me go back out. We trespassed on a neighbor’s property, and he cornered me up a tree, yelling at me with a hammer in his hand, and my mom let me go back out into the neighborhood and play.

Now, my oldest son has a phone, and we use Google to keep track of each other. Literally. I can see the little dot with his profile picture on it, moving around our town. How would I have done when I just had to trust that he was fine? Or was it easier then?

I don’t believe for a second that the world is more dangerous now. I just think we hear about every terrible thing that happens, in every state, immediately after it happens, in excruciating detail. And for an anxious person with a very vivid imagination, that spells panic attack or irrational worrying.

So this anxious person with a very vivid imagination decided to fight fire with fire and write a story about the worst case scenario. And falling in love may be scary, but maybe that kind of scary is exactly what counters the anxiety that seems to try to grab hold of more and more people these days. Writing about it? Maybe that’s what keeps anxiety in its place.

We’ll see. There’s probably a family vacation in my future. ;) 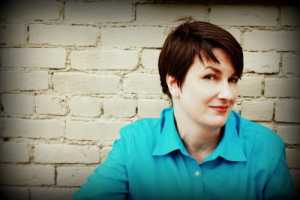 Beck Anderson loves to write about love and its power to heal and grow people past their many imperfections. She is a firm believer in the phrase “mistakes are for learning” and uses it frequently to guide her in writing life and real life.

For Beck, the path to published novelist has taken lots of twists and turns, including a degree in anthropology, a stint as a ticket seller at a ski resort, a much-loved career as a high school English teacher, and a long tenure as a member of the best writing group ever, hands down.

Beck balances (clumsily at best) writing novels and screenplays, working full-time as an educator, mothering two boys, loving her husband, and making time to walk the foothills of Boise, Idaho, with Stefano DiMera Delfino Anderson, the suavest Chihuahua north of the border.

Gosh, this is such a relatable feeling as someone who also writes and has anxiety. Beautifully said!

Beck, hats off to you for not allowing anxiety to defeat you or paralyze you.

Thanks, Keira! I appreciate your kind words. :)