The winner in the Historicals with Stepback category was Sweet Talking Man. On the front we see a beautiful white bed, but what really made voters wax eloquent was the picture on the inside.

Not only did they find the man attractive; they loved the idea of a footrub!

Jo-Ann seemed to speak for many women when she commented, “Footrubs! Need I say more?”

Other readers commented on the beautiful lighting , sexy-but-realistic pose, and the contrast between the untouched bed on the outer cover and the scene inside. But that foot massage was clearly a deciding factor for many readers. 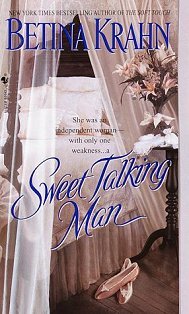 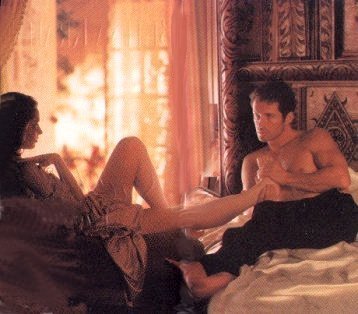 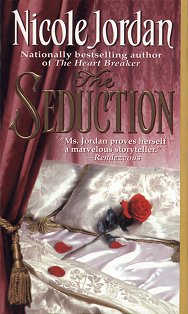 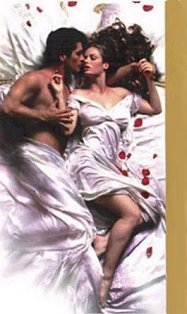 Coming in a strong second was The Seduction. Here the front cover features a single rose on a pillow, and the stepback reveals a couple in bed, with rose petals. To me it called to mind /wp-content/uploads/oldsiteimages from last year’s academy award winning movie, American Beauty.

Several readers who voted for it loved the contrast between the red rose petals and the white sheets of the bed. Others liked it because it was both beautiful and sexy. Lisa had this to say: “I thought the cover was elegant yet sexy and seductive. The step-back…ooooh, it steamed. I thought the two came together very well. The cover was like a promise of seduction and the step-back was the seduction.”

Two Madeline Hunter books had covers in this category. The third place finisher was By Arrangement. A cropped picture of a beautiful gown is on the cover, and the book opens to reveal a montage of scenes from the book. Readers who chose it particularly liked the montage effect and wanted to see more such covers.

Alicia said, “This cover depicts many themes throughout the book. I like the way the photographer incorporates the different themes. The choice of lighting in the collage makes this cover stunning.” Kate liked that the cover depicted passion and romance “without resorting to the cliché clutch pose.” 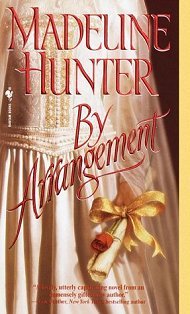 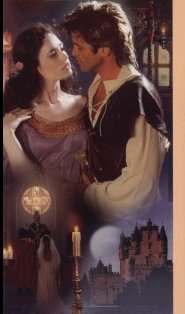 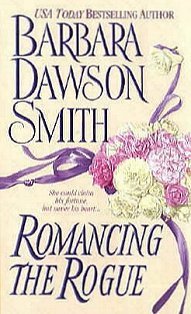 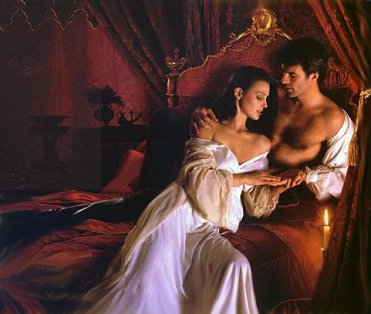 Romancing the Rogue came in fourth.

Connie thought that the cover “captured the mood and romanticism.” Although Jaycee liked the nosegay on the front, the stepback is what really convinced her to choose it as the best. She said, “It’s softly romantic in the candle light. The lush velvet curtains and bedspread done in deep burgundy is also very sensual.”

In fifth place is The Bride of Black Douglas. The rose and castle on the front cover are set against a blue background, and the stepback inside is another montage of scenes.

Peggy found it “haunting,” and Patricia chose it because it looked like it “actually had something to do with the plot.” She did wonder what the stone face was in the corner, and I couldn’t help wondering it myself.

The sixth place The Last Knight has an unusual front cover – a mandolin by a stone bench. The stepback shows the hero alone, holding his sword.

Lodeen thought the title could have been “Perfect Knight.”

The seventh place cover, The Mistress was appreciated by voters who didn’t want overt sexuality in a cover. A landscape with a gazebo is on the front, and inside we see a couple together – with all their clothes on.

Anna thought that the cover placed the reader “deeply in the setting.” I voted for it myself because I liked both the front and the stepback, and thought both were beautifully rendered.

In eighth place My Fair Lord, was chosen by readers who were tired of more blatantly sexual covers.

Those who picked My Fair Lord liked the coach on the front cover, which is echoed realistically inside the stepback. The moonlight got reader Linda’s attention, and she thought the front was “like a fairy tale.”

Ninth place A Scandalous Marriage was also chosen by those that liked the less explicit covers.

LLB said, “This is my favorite because it’s the most romantic and it isn’t overly sexual. The passion between the two is implied, which is my preference on covers. Most of the bedroom scenes are overly sexual, although at least in Sweet Talking Man (the winning cover), they’re not in bed together.” 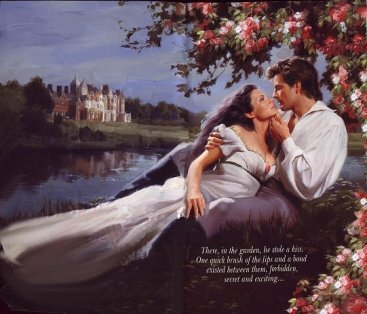 By Possession didn’t fare nearly as well as By Arrangement; it came in last. This is perhaps explained by its similarity to the more popular By Arrangement. Several readers commented that they liked both covers, which have a very similar look. But when they had to narrow it down to one they generally went with BA.

Several readers who commented on the covers in this category expressed a desire for more stepbacks. Indeed, they seem to be the best of both worlds. Outside, a tasteful cover that can show its face in public; inside, the type of sexy cover many readers obviously enjoy. And never underestimate the allure of a foot massage!