Erica Taylor: “You’re a Duke, Andrew,” and How Regency is my Fan Fiction

When I was in college, I wrote Harry Potter fan fiction. It’s still posted online, but please don’t try and find it. And if you do, don’t tell me you read it.

Writing fan fiction was the best way for me to figure out how to tell a story. With a set group of characters to build from, rules of the world, a predetermined setting and style, I didn’t have to do any of that work myself. I didn’t have to reinvent the wheel, I just got to take it for a spin. It was like playing with someone else’s toys and not having to do the work of cleaning them up afterwards. I could make up the story, intertwine the characters, and focus on their struggles without having to make up the parameters of the world while I did it. Hats off to the authors who can build their own world for a story to live in; my creativity well does not run that deep.

Writing historical romance, to me, is just like writing fan fiction. I love history and have since the Christmas morning when my Samantha American Girl doll came into my life. She made history real—reading from an individual’s perspective, history became a story and not just a series of names and dates to memorize. A set of years meant nothing to me but tell me about how the people lived and what they experienced, and I am invested in what that means.

When I realized there was really no future in writing Harry Potter fan fiction, I turned to my second love. If I can’t have wands and wizards, give me dukes and masquerade balls and I am a happy girl.

Writing in the Regency period provides a predetermined set of rules—historical moments that are fixed points in time and cannot be changed. Clothing and hair styles, shoes, furniture, homes, food, conduct, music, entertainment, everything is already in place. I never wanted to create my own world, and I was happy to move about in one that already existed, using what was there to fit my needs. All I need to do is drop my characters into the mix, interweave them with historical moments, and have my way with them.

I can have a character discussing crop rotations with the Duke of Devonshire.

I can put a hero at Waterloo.

I can give a woman a set of boxing gloves.

I can invent a secret sect of the government that does internal investigations.

In history, there is a notion of perceived behavioral expectations. Everyone—meaning society at the time—expects a lady to be prim and proper. Everyone expects the duke to dally with a lady riddled with scandal, even though she’s not a proper wife for him and he would never marry her. However, historical fiction is fiction; there are lines you can blur, slice through with a cutlass, things you can bend to your will. My prim and proper lady can be hiding a devious nature. My duke can marry the scandalous lady.

In The Perfect Duchess, Andrew Macalister, the brooding Duke of Bradstone, finds himself in a predicament. Or rather, finds himself engaged to the twin sister of the woman who left him at the altar for a footman. But what does that minor detail matter? He’s been smitten with the scandalous Lady Clara for years, she is in need of protection, unable to fend for herself after she’s nearly beaten to a pulp. It’s a simple solution to the benefit of both parties. Except, Lady Clara wants nothing to do with any of it, agreeing merely to buy herself some time to figure out her life. Hiding out as a duchess-to-be is the perfect way to find out why her sister left all those years ago and uncover who is trying to ensure that Clara follows her sister to the grave. What Clara didn’t count on was her childhood feelings for Andrew resurfacing, but with full womanly wants and expectations. Who can she trust when she’s never been able to trust anyone ever before?

In my Regency world, everyone deserves a chance at their happily ever after. And who knows, Harry Potter’s muggle ancestor might make an appearance at some point – it’s all fan fiction, after all.

The Perfect Duchess is the first book in The Macalisters series, though it is the second book released. That simply means, when you’re done reading The Perfect Duchess (Book #1), A Suitable Affair (Book #2) is already released and waiting to be read. But fear not, gentle reader, for An Improper Encounter (Book #3) will release later this year. 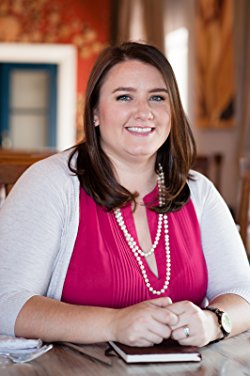 Erica Taylor is a mother of two and military wife married to her high school sweetheart. Raised in the mountains of Colorado, she holds a BA in History from the University of Colorado. Erica has been writing stories since she can remember, picked up her first romance novel while on a beach vacation as a teenager, and fell in love with falling in love, with sexy heroes and the feisty women who challenge their lives.

A self-confessed geek, Erica loves anything Harry Potter, Doctor Who or Star Wars, can spend hours in Target with a Starbucks, and truly believes a cat makes a home. Currently living in South Africa, Erica can often be found writing during soccer practice or piano lessons and is not afraid to let dinner burn if it means getting the story out of her head.