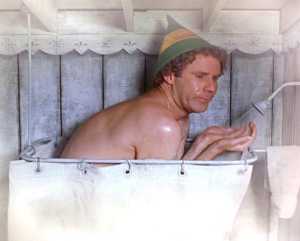 The cold shower is the romance novel male equivalent of the internal hymen: you see it in books so frequently that you probably don’t notice it anymore, but when you stop to think about it, something’s off. In fact, everything is off. The cold shower, it seems, is just as grounded in reality as the mythical internal hymen.

What is the cold shower? Here are just a few of the many, many examples:

After ogling the heroine Jennifer, the hero Cletus reflects:

A cold shower was in order. And yoga. And then another cold shower. – Beard Science by Penny Reid

After ogling the heroine Lucy, the hero Zack reflects:

He needed a shower. A cold one. – Getting Rid of Bradley by Jennifer Crusie

After ogling the heroine Emma, the hero Connor reflects that if he couldn’t

take a cold shower, he’d have to settle for cold drinks. And maybe he should just pour the next one one in his lap, where it would do the most good. – Whatever Reilly Wants by Maureen Child, from the anthology Kiss Me, I’m Irish.

After sleeping next to the heroine Nicole, the hero Ty has

a morning hardon that wouldn’t quit, even after a gut-sucking cold shower. – Tangling with Ty by Jill Shalvis

After sleeping next to the heroine Annabel, the hero Rev

In case you haven’t put it together, the heroes have erections, and they’re going to take cold showers to make them go away.

Here’s the thing: after an (admittedly unscientific) survey of husbands, boyfriends, and male friends, the AAR staff has not come up with a single man who has ever taken a cold shower to make an erection go away. Not one.

“If you have time for a shower to get rid of your erection,” one man asked, “why would you take a cold one when you could take a hot one and get rid of the erection much more pleasantly?”

This was the general consensus of the men interviewed. Other responses included:

“If alone why would you take a cold shower? Enjoy it while you still can, I say!”

“A COLD shower?!” followed by what our interviewing reviewer described as “a rather girly screech.”

So where did this trope come from?

This old religious explanation may be the right one for the origins of the idea but it’s certainly not the explanation for these characters. Anybody who knows Cletus from Beard Science knows he’s not worried about a Biblical curse, and I can’t see a motorcycle gang member like Rev feeling that way either. The cold shower has grown into shorthand for an action a man takes to eliminate unwelcome or inconvenient lust, regardless of the character’s religiosity.

Why has it stuck around? Maybe it’s become an internalized cliche, “the thing to say” in certain situations (you’ll notice the patterns in the examples I quoted). Perhaps it feels nicely balanced to authors as a piece of figurative language. We describe feeling “hot” when we’re aroused, as in “hot and bothered” or AAR’s “hot” sensuality rating, so a cold shower feels like a rational, Newtonian equal-and-opposite reaction. Perhaps, in early cases, publishers weren’t comfortable with explicit depictions of masturbation, and some early author hit on this as a way of expressing the hero’s arousal. It might be traceable, like Heyerisms (phrases people think are authentic Regency English but were actually invented by Georgette Heyer to catch copycats). Did one author, for whatever reason, write it in, and a cascade of writers adopted it without thinking it through?

We may be making progress, though. While researching this post, I came across this entertaining gender-flipped example from The New Year’s Deal by Julie Kenner from the anthology Holiday Hideout.

[S]he and her raging libido were going to take a nice cold shower, then climb into a nice warm bed – alone. Not the most enticing of plans… but she couldn’t argue with its practicality.She ran the icy water and tried to get in. But she couldn’t deal with the cold, much as she might need it. Instead, she twisted under the temperature-control knob and slid under a stream of of warm water, letting it sluice over her, letting it warm her.

Her skin was already sensitive with desire, and she closed her eyes, letting her mind wander, imagining Josh’s hands on her breasts, following the path of the water down her stomach and lower…

Now there’s someone who knows how to use a shower ;)

Have you noticed this phrase and, if so, did you ever think about it? What do the men in your life (or you, if you’re a man) say about it? If you’re a writer, have you used it? Do you have anything to add about the history of the cold shower?

Please note that links are provided for ebook editions of these titles, and some may not be available from all retailers. Where no link is given, an ebook is not available from that retailer.

Great piece Caroline! The cold shower does raise its ugly head in M/M but not often now. I think female authors are realising that cold showers are a bit of a myth. Books, laptops and papers are more useful when the stiffie is inappropriate!