This month marks the 200th anniversary of Jane Austen’s death. With that in mind, I thought I’d tell you a bit about mourning customs of that time, specifically in terms of fashion. The prints shown are from my own collection.

In the 18th and 19th centuries, when a family member died, it was important to honor that person with a public display of mourning. Black clothing was a public show of respect. We do that today by wearing black or dark clothing to funerals, though even that is no longer considered important. But the Georgians, and especially the Victorians, wore mourning clothes for much longer than one day. Sometimes, for widows in particular, mourning clothes may have been worn for a year or more. Queen Victoria wore black mourning dresses for 40 years after the death of her husband, Prince Albert. 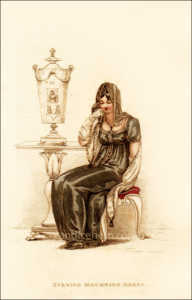 Figure 1: Ackermann’s Repository of Arts, December 1810. Evening Mourning Dress in honor of the death of the king’s daughter,

During Georgian and Regency times, the rules governing mourning dress were less precise than the almost obsessive ritual rules of mourning during the Victorian era. In fact, I have found no Georgian or Regency resource documenting any rules for personal mourning. Contemporary magazines and newspapers provide extensive details for court mourning, that is, when a member of the royal family died. But even those rules were primarily for those close to the court, the aristocracy, and those upper classes in the large cities. Those who lived in the country were not required to spend money on black garments for a royal death, but might simply wear a bit of black lace or ribbon, or black gloves, to show respect. When the Duke of Gloucester, the king’s youngest brother, died in August 1805, Jane Austen wrote to her sister Cassandra:

“I suppose everyone will be in black for the D. of G. Must we buy lace, or will ribbon do?”

When a member of the royal family died, the Lord Chamberlain announced the periods of mourning and the prescribed mourning wear. Here, for example, is his announcement of public mourning for the death of Queen Charlotte on November 19, 1818: 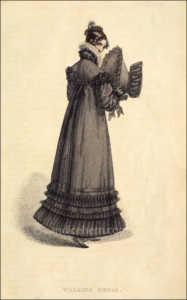 “Orders for the Court’s going into mourning on Sunday next, the 22d inst. for her late Majesty the Queen, of blessed Memory, viz.:

Note that “undress” refers to informal wear. “Weepers” refers to cuffs on the sleeves, usually made of white muslin, and were so called because one could use them to wipe one’s eyes and nose when weeping. These were worn by both men and women. 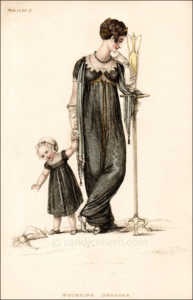 Figure 3: Ackermann’s Repository of Arts, September 1809, representing “slight-mourning.” No royal death occurred at this time, and the magazine text implies that this is for personal mourning

The prescribed fabrics and accessories in the announcement above are for the first phase of mourning, variously called full mourning or deep mourning. During this period, fabrics were to have no sheen or shine, no sparkly jewelry was allowed, and everything, for women, at least, was unrelieved black. This period, per the official announcements, typically lasted 10 days to 2 weeks. A second phase, referred to as either “slight mourning” (from “slighting the mourning”) or “second mourning” allowed for more whites and grays. As an example, here is that second phase of mourning described for the death of Queen Charlotte’s brother in March 1814, in the Lord Chamberlain’s announcement:

And finally, a third phase of mourning, generally referred to as half-mourning, allowed more white and grey, more color in accessories and trimmings, a bit more sheen to fabrics, and more sparkle in jewelry. In the same announcement as above, here is that third phase of mourning described for the death of Queen Charlotte’s brother in March 1814: 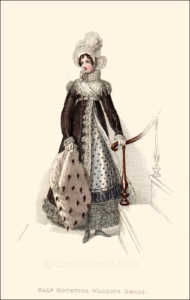 Though the type of clothing is strictly prescribed, in terms of color and fabric, social activities were not much curtailed, even during deep mourning, as you can see with the prints showing evening dresses in full mourning. It appears to have been sufficient to wear clothing that honored the deceased person, without the need to restrict social activities. In certain cases, the king requested that public theaters remain closed for a short period of time, as he did with the death of his brother, the Duke of Gloucester, in 1805, and the death of his beloved daughter Princess Amelia in 1810. In both cases he requested that theaters remain closed until after the funeral.

Personal mourning, ie for the death of a loved one, did have expectations of curtailed social activity, especially for women. Widows typically wore deep mourning for a year, and half-mourning for another 6 months or so, and were more or less confined to home during that first year, or least for the first 6 months, only going out to attend church services. They could receive visitors, but did not return those visits. Daughters who’d lost a parent were similarly confined to home, but not for as long as for widows. Many young women had to forego a London season if they were in mourning for a parent. Widowers and sons were not apparently held to the same restrictions. 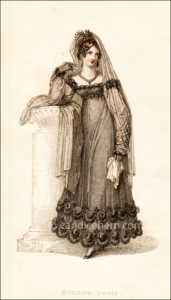 You can also see by the prints that mourning dress, though somber, could still be fashionable. In each of the prints shown, the dresses, bonnets, and other accessories represent the height of fashion. The descriptions of the prints in the magazines sometimes explain how to adapt a full mourning ensemble to half-mourning. The evening dress in Figure 1, for example, which represents full mourning, is worn at over an under-dress or slip of black sarsnet, but when for half-mourning “will form a most pleasing habit when extended over a slip of white sarsnet or silver grey.” The slight-mourning dress in Figure 3 can be also be modified. “In deep mourning, this robe should be formed of black crape, and worn over black sarsnet.”

Though the majority of fashion prints showing mourning dress were published at the time of a public court mourning (with the exception of Figure 3, a rare example of personal mourning), readers likely used these magazine prints to determine styles and modes for personal mourning. As the country was at war with France, and battlefield casualties were sometimes high, there would have been many occasions for ladies to don mourning clothes. When Jane Austen died on July 18, 1817, her mother and her beloved sister Cassandra would have worn deep mourning – perhaps not as high fashion as the designs in these prints, but unrelieved black with no shine.

Candice Hern is the award-winning, bestselling author of historical romance novels set during the English Regency, a period she knows well through years of collecting antiques and fashion prints of the period. She travels to England regularly, always in search of more historical and local color to bring her stories and characters to life. Her books have won praise for the “intelligence and elegant romantic sensibility” (Romantic Times) as well as “delicious wit and luscious sensuality (Booklist). Candice’s award-winning website (www.candicehern.com) is often cited for its Regency World pages, where readers interested in the era will find an illustrated glossary, a detailed timeline, illustrated digests of Regency people and places, articles on Regency fashion, research links, and much more. It is the only author website listed among the online resources for the Jane Austen Centre in England. Visit www.candicehern.com for more information on all Candice’s books, including excerpts and a look “behind the scenes” of each novel.

Ha–I love the story of how that scene was filmed. So classic.

So interesting! Thanks for sharing all this info. I feel sorry for the wives who had to mourn for such a long time and couldn’t go out and do stuff. What was the point of that?

It was all about showing respect. But it’s typical, isn’t it, that a woman’s show of respect was a lot longer and more restricted than a man’s.

I agree. Thanks Candice.

We always see fashion prints about ball gowns and morning gowns, but mourning pieces are hard to find, so it’s great to see what they looked like. Also good to know when it’s appropriate to wear what depending on your relationship with those departed.

I love this piece. And the plates are perfect!