The importance of story. . . and history: a Guest Post by K.C. Bateman

K.C Bateman’s To Steal a Heart was undoubtedly one of the best début historical romances I’ve read recently, and I’ve been looking forward to her next book – A Raven’s Heart – ever since. I asked Ms. Bateman to tell AAR a little more about herself, her books… and her alter-ego as an antiques expert!

Five years ago I left my home in England and uprooted my young family to move to the American Midwest with my husband’s work. Before that, I’d spent twelve wonderful years as a fine art and antiques appraiser, running my own auction house, and also appearing on several British antiques-related TV shows as an on-screen expert.

But I soon discovered that there wasn’t much use for my auctioneering or appraisal skills in central Illinois, and with three small kids at home, I realized I would go stir crazy if I didn’t find something else to do. I’ve always been an avid reader, especially of historical romance, and I’d studied English at University, so it was a natural sidestep to use my geeky historical knowledge to write my own historical romance.

Someone once told me that you should write the books you want to read. I loved reading about capable, intelligent heroines, so I decided to write about ‘historical girls with cool skills.’ Unofficially, I like to describe them as ‘bad-asses in bodices’ or ‘kick-asses in corsets’! So my heroines include a tightrope-walking thief, a brilliant code-breaker, and a highly-skilled counterfeiter; they’re strong, witty, and more than a match for the men in their lives.

I also wanted to highlight the fact that not all Regency-era romances have to be set in the same old London ballrooms and country estates. There’s a whole world out there to explore—even if it’s only within the pages of a book as an armchair traveler—and lots of fascinating chapters of history to discover. The first book in my ‘Secrets and Spies’ series, To Steal A Heart, is set in a Parisian circus, a French chateau, the prison fortress of Vincennes and a smuggler’s ship. A Raven’s Heart is set mainly in the Spanish peninsular.

Many of my ideas are inspired by real-life historical people, objects, or events. For example, one of the themes I play with in A Ravens’ Heart concerns internal and external scars. Heloise has a scar on her face which she believes makes her unattractive. Raven’s scars are all on the inside. He thinks he’s too emotionally damaged to love. In this respect they’re opposites—and perfect for one another; they both see past the damage and find something to love underneath.

In one of my favorite scenes Raven lets slip how much he cares for Heloise by referring to the ancient Japanese art of Kinstukuroi. It’s the use of molten gold to repair damaged pottery, with the understanding that the piece is more beautiful for having been broken and lovingly repaired. I thought that was such a romantic idea that I had to include it in a book. Ostensibly Raven’s discussing his mother’s favorite piece of porcelain, but we know he’s really talking about Heloise. 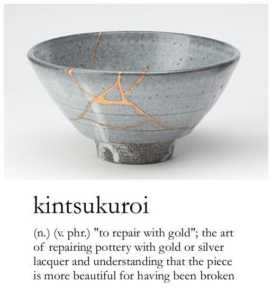 One major similarity I’ve discovered between my two jobs—antique appraiser and historical romance writer—is the importance of story. In the antiques trade we call the history behind an object ‘provenance’. And stories are powerful things. Stories can change everything. Take this example that I came across while researching one of my books; An auction house in France recently received for sale this diamond and sapphire gold ring: 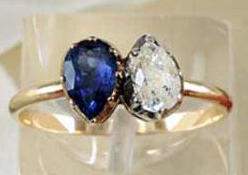 Each of the teardrop-shaped gems weighed just under a carat each, which gave the ring an estimated auction sale value of around $2,000, based on current market values for similar pieces of jewelry. So far, so ordinary. Ah, but here’s where the story comes in. There was evidence to prove that this particular ring was none other than the engagement ring Napoleon Bonaparte gave to his Empress Josephine de Beauharnais.

That changed things completely. The auction house, aware that the background to the ring would make it far more appealing to collectors, decided to set the pre-sale auction estimate at ten times the original estimate – $20,000, adding, “It is not our job to tell bidders how much they should pay for the historical premium.” Then they crossed their fingers and put it up for sale.

Can you guess how much the ring went on to sell for? How much value did the romance of that particular story add to two colored bits of rock and a thin sliver of shiny metal? It sold for $949,000, plus 25% buyer’s commission!

So I’m firmly convinced of the power and importance of story. As an auctioneer, I always encourage vendors to find out as much as they can about the item they’re hoping to sell, in case it has a valuable provenance behind it. As an author, I hope that readers will find value in the stories and characters I create, and will want to join me on even more adventures.

I always get cross when someone disparages fiction—especially the romance genre—by saying ‘but it’s just a story, or ‘why do you waste your time with that stuff?’ Just a story? Stories are how humans make sense of the world. We’ve told them for millennia, from the very first drawings on the cave walls, to the e-books on your Kindle right now. Stories can transport you to new worlds, introduce you to new people, teach you things you didn’t know, and even make you fall in love.

And really, what could be better or more powerful than that?

To win an eARC of K.C. Bateman’s A Raven’s Heart, enter the giveaway using the rafflecopter form below.  There are THREE (3) copies up for grabs, AND MAKE SURE YOU COMMENT TO LEAVE YOUR EMAIL ADDRESS AND PREFERRED FORMAT.
a Rafflecopter giveaway 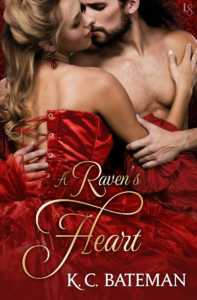 When a bookish codebreaker and a dashing spy are reunited in this steamy historical romance from the author of To Steal a Heart, their lives depend on their ability to resist temptation. But fate is a mistress who cannot be denied. . .

In the war against France, Heloise Hampden is a high-value asset to the Crown. When she cracks the enemy’s most recent communication, French agents are sent to kill her. But it’s the agent assigned to protect Heloise who poses the greatest threat to her heart: William de l’Isle, Viscount Ravenwood. Heloise has quarreled with the man they call Raven since childhood, yet always maintained a chaste distance. She’s sure nothing will change, thanks to the disfiguring scar on her face.

Nothing has changed. Raven still wonders how Hell-cat Hampden’s lithe body would feel pressed against his, but for the mission he must remind himself that the woman takes more pleasure in ancient languages than she does in seduction.

His imprisonment six years ago broke him in a way that makes the prospect of love impossible—he’s a shadowed Hades pining for sun-kissed Persephone. Still, his heart beats like mad whenever he’s within ten paces of Heloise, and he’ll do whatever it takes to keep her safe—even if that means taking her to Spain as an unwilling hostage. Protecting her from danger will be a challenge; protecting her from desire will be pure agony.

Kate Bateman (writing as K. C. Bateman) wrote her first historical romance in response to a $1 bet with her husband who rashly claimed she’d ‘never finish the thing.’ She gleefully proved him wrong with a historical set in the Italian Renaissance. Now writing for Random House Loveswept, her latest ‘Secrets & Spies Regency-era trilogy features her trademark feisty, intelligent heroines, wickedly inappropriate banter, and heroes you want to alternately strangle and kiss—all mixed up in the intrigue and turmoil of the Napoleonic wars.

When not traveling to exotic locations ‘for research’, Kate leads a double life as a fine art appraiser and on-screen antiques expert for several TV shows in the UK. She splits her time between Illinois and her native England and writes despite three inexhaustible children and a husband who has flatly refused to read any of her books ‘unless she hits the NY Times Bestseller list.’ It is—naturally—her fervent desire to force the semi-illiterate, number-loving cynic to do so. He still owes her that dollar.

I love history and am always pleased to find a story anchored in historical reality.

Thank you for the post. Ci love the story about the ring. History matters for so many reasons.

I really enjoyed _To Steal a Heart_ and so I’ve been looking forward to the next book for Bateman.

I loved To Steal A Heart, it was such a refreshing new story! I’ve stopped reading most traditional historical romance authors so it’s a real pleasure to find an author who can satisfy my craving for that genre. I will be reading A Raven’s Heart whether I win a copy or buy it! Oh, and I love the story of kintsukuroi! (If I were to be so lucky as to win I’d like an epub copy of the book.)

I love watching antique shows while I’m in the UK on holiday, especially Flog It. ;) And I grew up in Illinois too! Fun blog.

wpDiscuz
You are going to send email to
Move Comment
<script type='text/javascript' src='https://allaboutromance.com/wp-content/plugins/wpdiscuz-media-uploader/assets/js/wm