On Friday, I reviewed début author Minerva Spencer’s Dangerous, book one in her series, The Outcasts. I remember being a bit sceptical when the book first appeared on my radar;  I’ve become increasingly wary of historical romances touting danger and adventure over the past couple of years, as so many of them have been disappointing –  too full of plot, not enough focus on the characters and their relationship. Plus, a heroine kidnapped by pirates and sold to a sultan?  Had we somehow gone Back to the Future and the 1980s bodice ripper when I wasn’t looking?  For whatever reason, I decided to read the book and, as I said in my review, after the first few pages realised my preconceptions had been entirely misplaced, and, once I’d finished, that I wanted to know a bit more about the author and how she’d come up with this particular plotline.  I asked her to visit us at All About Romance – so that she could set me straight!

Caz: Thanks for stopping by, Minerva

MS: Thanks so much for having me on AAR today! This is one of my favorite sources for romance recommendations and I love following your blog.

Caz:  Thank you so much – it’s always good to know our recommendations are useful J   Are you a long time reader of historical romance?  Is it a genre that’s always interested you?

MS: I discovered Victoria Holt in 7th grade (Devil on Horseback was my first) and my junior high librarian was a fellow romance lover who helped me get my hands on every book Holt wrote. She also steered me toward similar authors like Mary Stewart and Phyllis A. Whitney.

Caz: OMG, we must have been twins in a former life or something – Holt and Whitney were two of the authors I read most in my late-teens and twenties.

MS: Really?  🙂  Well, for whatever reason, I stopped reading romance after graduating high school. I didn’t pick up a romance novel again until 2013, almost thirty years later. I’d just closed my B&B and needed to regroup and recharge so I did a lot of comfort reading. Once I’d re-read my old favorites (like Holt) I went looking for new authors who wrote in a similar vein.

I got lucky and found a battered and coverless copy of The Convenient Marriage, by Georgette Heyer, in a giveaway box at my bridge club. I fell in love with her writing and inhaled her books. When I ran through Heyer I was terrified I wouldn’t find anyone else as enjoyable.

Thankfully, my digital library has a “if you like this, you might like this,” function and Tessa Dare’s name came up. That was the beginning of my love affair with “modern” romance writers. I went from Dare to Hunter, Hoyt, Thomas, Kleypas, and on and on.

And then I decided to write my own.

Caz:  I’m a big Heyer fan, too.  Dangerous has an unusual premise – the heroine is abducted by pirates when she’s fourteen and sold to a Sultan – which sounds very old-skool.  Can you tell us a bit more about the premise for this novel – and the series, and what exactly was the appeal for you?

MS: The series is called The Outcasts because each book features heroes and heroines who are on society’s fringe, for one reason or another.

I’ll be honest with you, when I wrote this (early 2014), I had no idea there was a whole sub-sub genre of bodice rippers from the 70s that revolved around harems. It never occurred to me that being sold into a harem would be considered sexy – quite the opposite, in fact. I knew from my research that hundreds of thousands of women were captured and sold in the slave markets of North Africa and it doesn’t take a genius to figure out what happened to a lot of them.

Anyhow, Mia, my heroine, played a minor but critical role in Barbarous, which is the second book in The Outcasts but the first book I wrote (that’s a different story . . . ).

Mia really leaped off the page and wouldn’t leave me alone so I gave her a book of her own.

I don’t know how other writers develop their stories and characters, but when I have a secondary character, no matter how minor, I like to imagine their life before, during, and after the story. How did they get to that moment in time? Why are they there? What will they do later, when they step off the pages?  I often write pages and pages of background that I’m pretty sure I will have to cut later. Some people might view that as a waste of time, but I find that I end up really knowing the characters and understanding their role. The same goes for historical background, which, unfortunately, often hits the cutting room floor due to editorial constraints.

But to answer your question (finally) I didn’t pick Mia’s harem background specifically; Mia came to me a fully-formed character who’d been captured by corsairs along with the hero in Barbarous, Hugh Redvers.

Mia is a pragmatic character with a lot of experience when it comes to surviving harsh conditions. I think people expected me to dwell on her life in the harem, but I chose to leave that part of her past to the reader’s imagination. I wanted the most impressive characteristic about her not to be that she’d been in a harem, but that she’d survived the harem without being broken. What must it have been like for her? She didn’t speak the language or know the customs and she must have been terrified. But who could she rely on in that situation other than herself?

Anyhow, I figured an early nineteenth-century woman would be forced to draw on inner strength to get through her harrowing experience. People didn’t put their psyches on display in 1811, they lived with their pasts and dealt with problems the best way they could.

Caz: I certainly appreciated the direction you took in the story. I know, from our email chats before we commenced this interview, that you came across some interesting – and rather startling – facts while doing your research for the book, that prove truth really is stranger than fiction.  Can you tell us more?

MS: One of the themes of the series – that of piracy in the Mediterranean and how it impacted those it touched – was something I’d been interested in since my graduate days studying American history. Of course back then I’d looked at piracy as it related to the origin of the US Navy.

What really stuck with me over the years was the sheer number of people who’d been kidnapped between the 1500s and early 1800s in the Mediterranean. These numbers are astounding.

How many people do you think? (go ahead…guess!)

Just like the slave trade, there are no exact statistics. But, based on similar types of data, historians estimate the numbers are somewhere from 800,000 to as high as 1.25 million by 1800.

That is a LOT of stories.

Just how were they taking so many captives? And from where?

First off, Corsair pirates didn’t limit their depredations to water.

They hit the coasts of Spain and Portugal so often and so hard there were huge stretches of coastline that were simply abandoned for decades. When the pirates came ashore they often took every person in a village, leaving ghost towns that people were hesitant to repopulate.

And they didn’t stop with the countries that bordered the Mediterranean, either. They free-ranged to anyplace they could find easy pickings. Places like the British Isles during the seventeenth century, especially during the tumultuous Civil War period when the threat of piracy took a backseat to domestic chaos.

During the mid-sixteenth century dozens of corsair vessels cruised the waters of southern Britain and preyed on Cornish villages. They forayed into Cornwall repeatedly, sometimes cleaning out entire towns. One documented raid lists over two hundred people captured. Just imagine the state of mind of the average coastal dweller! It wasn’t just famine, death, war, and disease these people had to worry about: it was pirates, and with good reason.

So, what did the corsair pirates do with the people they kidnapped?

Caz:  You’re right – those numbers really are astounding.  And I had no idea that the pirates actually raided coastal towns and abducted entire villages.  Mind. Blown.

The second book in the series comes out later this year – can you give us a sneek peek?

Hugh (also known as One-Eyed Standish)  was presumed dead at the hands of pirates almost twenty years earlier. Very much alive, Hugh has returned to Britain to pay some old debts. He plans to return to his life at sea just as soon as he has finished what he came to do – but his uncle’s beautiful young widow makes it very difficult for Hugh to do the right thing….

Dangerous and Barbarous take place contemporaneously, so you’ll see some of the same characters popping up in each.

Caz: What are you working on now?  Do you have any future plans you’d care to share?

MS: I just finished book four of The Outcasts and started two new series. I always work on a couple of books at the same time and right now I’m working on a contemporary detective trilogy and a Regency Era quintet.

Caz:  With all that going on, do you get time to read for pleasure?

MS: I read anything and everything. I’m a huge fan of BookBub and the sales they offer have really made me more adventurous with new authors. After all, .99 or 1.99 for a book is less than a latte. Recently I’ve read a fantastic post-apocalyptic book called The Postmortal by Drew Magary and I’ve also been revisiting the works of Mary Roberts Rinehart, a woman who has often been called America’s Agatha Christie.

Caz: Thanks so much for chatting with me, Minerva, it’s been a pleasure, and I wish you the very best of luck with the book and future projects.

MS: Thanks so much for inviting me here to chat today. I’m glad the subject of piracy in the Mediterranean piqued your interest, and it’s great to be able to share some historical facts that don’t always make it into the finished novel.

I’m always happy to answer either questions about my books or historical research questions from readers if I have the answers. Happy reading! 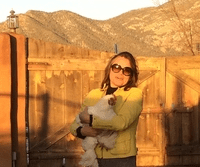 Minerva Spencer is a Canadian transplant who now lives in the mountains of New Mexico. She began writing in 2013 after closing her 8-room bed and breakfast (a subject she will never write about. . . ) Minerva has been a criminal prosecutor, college history professor, and bartender, among many other things.

She currently writes full-time and operates a small poultry rescue on her four-acre hobby farm, where she lives with her wonderful, tolerant husband and many animals.

When Minerva isn’t writing or editing she’s playing with birds and dogs or doing a little DIY.

Dangerous, Minerva’s first book in her Regency Era series, The Outcasts, will be published by Kensington Press June 26, 2018, and Barbarous, October 30, 2018.

Keep an eye out for Scandalous and Notorious in 2019!