Hello All About Romance readers.

I am thrilled to join you today to chat about my latest novel, Rakes and Roses, and share insights on my Mayfield Family series.

Dysfunctional families are certainly not new; Shakespeare and Jane Austen are riddled with them. Rakes and Roses, my third book in the Mayfield Family series gives a new perspective on the dysfunction through the lens of addiction and gender equality. As with the other books in the series it can stand alone or be read as part of the series—no pressure to read the other books first. You do you!

When Elliott Mayfield became the fifth Viscount of Howardsford, he became responsible for the massive debt his father had been hiding. At the same time, scandal rocked the Mayfield family reputation when his younger brother, Teddy, announced he was expecting a child with one of the household maids and planned to marry her.

With his family on the brink of losing everything, Elliott made the decision to go to India and expand a tea plantation that was the only source of profit left to them. By doing so, he turned his back on the woman he’d been courting—Amelia—and gave up any family ambition of his own. He believed that if he could get the finances in check, he could save his family. Unfortunately, the true damage done to his family through generations of bad behavior was not financial and the broken relationships only got worse during his absence.

Teddy did not become a responsible human just because he was a husband and father. His maid-turned-nobleman’s-wife isolated herself while Teddy continued to run amuck. The first two books in the series—Promises & Primroses and Daisies & Devotion—are the stories of Teddy’s sons.

The next of Elliott’s siblings, Jane, married a cruel man who, though he provided financially, was abusive to her and their children. Rakes & Roses, which comes out in this month, tells the story of Harry, Jane’s son—more about this story later.

The series comes together like this: When Elliott returns to London after having successfully saved the family from financial ruin, he more fully realizes the ruin of his family. It’s been more than thirty years since he left and by now his siblings have all passed on, leaving their children to fend for themselves without the foundation of connection and confidence they need to find the happiness he wants for each of the. Elliott comes up with a plan to craft personal inheritances for each of his nieces and nephews if they marry well. He believes that a well-matched couple committed to their families can heal the breaks that have occurred and save these young people from their legacies and put them on the path to connection with one another that will sure up future generations. It’s a generous if not short-sighted idea that forms the basis of this series as we get to see how each of the next Mayfield generation navigate the new possibilities Uncle Elliott’s inheritances create for them. 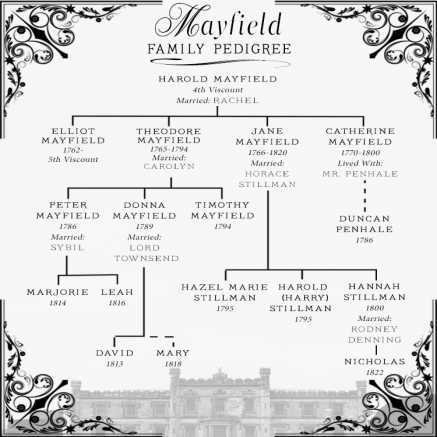 Rakes & Roses is book three in the Mayfield series. In this story Harry, Jane’s son, has squandered the family holdings he inherited when his father died by living a dissolute life in London. Once Elliott revealed the marriage inheritance he stopped paying Harry’s gambling debts but Harry didn’t stop gambling. At the start of this story, Harry owes a lot of money to a dangerous lender he can no longer pay. He makes a deal with Lord Damion, a phantom philanthropist who tries to save idiot young men like Harry from their vices.

Lady Sabrina is the illegitimate daughter of a Duke. Her father’s acknowledgement allows her to function in society to a point, but her life has always been controlled by men who don’t really love her—her father and then her abusive husband. When her husband dies, she inherits his fortune and gains freedom she has never had before. She is determined to make her own way and never let a man have control of her happiness.

Harry, in this story, becomes the “Damsel” in distress while Lady Sabrina becomes our “Hero.” I have never written a “playboy” character before. It’s not my favorite character archetype—in books I read or in real life—but it ended up being a fun challenge to address why Harry’s chosen the life he’s chosen. The power dynamic between the sexes was so unbalanced in this time period that putting him in a position of needing help from a woman who was in the power position was an additional twist I really liked. The gender-swap part of this story necessitated that I really know where these people came from and what they were afraid of.

Lady Sabrina is strong, smart and capable, but she’s also lonely and distrustful. Harry is broken and miserable but through the story begins to look at life differently than he ever has before. Bringing them together in a way that broke through their individual barriers created what will be—I hope—a fresh and engaging Regency Romance for the readers. Though each of the stories in the series focuses on a member of the Mayfield family, each has its own story to tell and can therefore be read in any order.

Buy it at Amazon

Josi S. Kilpack is the bestselling author of several Proper Romance and Proper Romance Historical series and a Cozy Culinary Mystery series. Her books, A Heart Revealed and Lord Fenton’s Folly; were Publishers Weekly Best Romance Books of the Year. She and her husband, Lee, are the parents of four children. 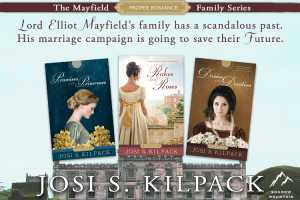 A standalone novel in the Mayfield Family series with an unusual premise and an uplifting ending.

Lady Sabrina endured an abusive marriage, a miscarriage, and early widowhood to emerge as a smart, successful, confident woman who found a way to make her mark in a man’s world. She has friends and purpose, but cannot hide from the emptiness she feels when the parties are over and the friends have gone home to families she will never have.

Harry Stillman may be charming and handsome, but he’s a gambler and a rake who has made a mockery of his privileges. He turns to the mysterious Lord Damion for financial relief from his debts, but still ends up beaten nearly senseless by thugs and left in an alley.

When Lady Sabrina comes upon Harry after the attack, she remembers the kindness Harry once showed to her six years ago and brings him to her estate to heal. Though their relationship begins on rocky footing, it soon mellows into friendship, then trust. But Lady Sabrina needs to keep Harry at a distance, even if he is becoming the kind of man worthy of her heart. After all, she is keeping a secret that, if exposed, could destroy everything she’s so carefully built.

“Uplifting…Kilpack flips the typical Regency romance script, with the heroine rescuing the hero. Kilpack’s strong, upright heroine who finds a way to claim her power in Regency society sets this love story apart. This magnetic tale will appeal to fans of emotional romance.”—Publisher’s Weekly

“Kilpack takes traditional regency roles and challenges them. She shows how one person can make an impact in the world. I found the story and premise unique.”—Heather Gardner, Fire and Ice

“This is a story of redemption above all else…the ending was perfect.”— Lucinda Whitney, author of Rescuing the Prince