Welcome back to Setting Smackdown, where two different romance settings brawl it out for first place in our hearts! (If you missed our first two Smackdowns you can find them here: Georgian vs. Victorian; France vs. Italy).  In our Stage vs. Screen smackdown, we’re not looking for romances featuring actors on vacation or meeting and falling in love with ‘ordinary people’. We’re looking at books which take us right into the heart of Broadway or the West End, Hollywood or Bollywood, or even turn-of-the-century Paris, when film-making as an industry was just being born.

First, it’s interesting to note that “Stage” is much less represented in romance than “screen.” Even when we expand to include everything that happens on a stage, from striptease to Shakespeare, “Stage” is clearly the underdog of this fight. But I thought the Georgian era couldn’t brawl with the Victorians, so what do I know?

Stage has an edge in history, going back much farther than Screen can. The Regency era has three stage-set DIKs here.  Joan Wolf’s His Lordship’s Mistress stars a well-born young lady turned actress, working to earn enough money to save her estate. Virginia Heath sets a diva on the road in How Not To Chaperon a Lady, and although our reviewer only gave it a B, Carla Kelly’s Miss Billings Treads the Boards (another road trip, with a troupe of actors and an undercover marquis) is a DIK in my book.

But just because film is more recent doesn’t mean there aren’t some excellent historical romances in its corner! The earliest days of film are captured in Judy Cuevas’s France-set Dance, of which the only negative thing I can say is that it’s out of print. Barbara Hambly’s Bride of the Rat God, set in 1923 Los Angeles during the silent film era, is a paranormal historical with historical details, an adorkable cameraman hero, and three warrior Pekingeses.

You like the early 1900s, you say? Well, try Eva Ibbotson’s Austria-set Magic Flutes, or follow a ballet company to the rubber baron capital of Manaus, Brazil in A Company of Swans.

What about the modern era? Olivia Dade’s Spoiler Alert and All the Feels follow the cast of a Game of Thrones-type sword slinging fantasy drama, Total Creative Control by Joanna Chambers and Sally Malcolm is set in the production offices of a British-set vampire show, and Reel by Kennedy Ryan takes us deep into the process of filming the biopic of a lost Black Jazz legend – and the physical toll it takes on the heroine to do so. Dig up the buried treasure that is Laura London’s unexpected Sunshine and Shadow (seriously, if you ever thought ‘How about a movie between a film director and an Amish woman?’ have I got a book for you!). And one of the ways you will know that I’m being held hostage and and trying to signal for help is if I ever miss the opportunity to plug my all-time favorite romance novel – Again, by Kathleen Gilles Seidel, the love story of the showrunner of a Bridgerton-type Regency soap opera and the actor who plays the duke. We also have an entirely separate tag for reality tv, which is increasingly popular and too much to even get into here. 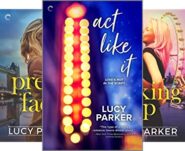 The most famous contemporary Stage-set series has to be Lucy Parker’s London Celebrities series, which has earned 4 DIKs and a B+ from us. But Broadway has the West End’s back! Christina Laurens’s Roomies stars a hot Irish subway musician-turned-musical theater star via the heroine setting him up to audition. Interested in dance as well as drama? Watch as global ballet phenom turns musical star – and sweeps the director off his feet – in Pas de Deux by Lynn Turner.

Which stars leave you struck? Are you a theater geek, or a silver screen aficionado? Let us know in the results!

It’s interesting that the results are exactly tied!

I recently finished Alice Coldbreath’s A Contracted Spouse for the Prizefighter. The FL is a male impersonator with a stage act at a vaudeville theater which I found interesting and unusual. However, I will say that it was my least favorite of the author’s Victorian Prizefighters series (they don’t need to be read in order). So only a lukewarm recommendation but it fits the bill. Although thinking of that story and the screen leads me to think of Victor/Victoria which I really loved. :)

I’ve wondered about that book. It’s advertised regularly on Amazon. Is it a worthwhile read?

I ADORE Victor/Victoria. It was a career changer for Julie Andrews, something she and her husband Blake Edwards, the director, wished for. Everyone in it is just the best!

Truthfully, if you are going to spend money, I’d go with the first book – A Bride for the Prizefighter. But you could easily read the sample to decide.

I love movies and the theater but due to the pandemic didn’t see a film or play inside a theater for two years. Since then, I’ve gone several times, and during a recent visit to London saw 4 plays and 3 films. I prefer going out to watching at home because I like the communal sense of it, the immediacy, the lack of distractions (when home I’ve ADD but in the theater I can sit for long periods of time because I’m more engaged), and the bigger screen/stage. Don’t know why, but the theatre in London was about half the cost of theater at home (Washington, DC) but the movies were twice as expensive.

As for books, I totally agree with Caroline about Kathleen Gilles Seidel’s Again. I adored that book and reread it periodically. The details are out of date (e.g., the fact that only one dressing room has a phone is a non-issue in this era of cell phones), but the success of Bridgerton has made the plot new again. Also second her recommendations of the Ibbotson and Carla Kelly books but was less fond of Sunshine & Shadow than she was.

Reading what I’ve posted I don’t think I come down on one side or the other of the smackdown, as I’ve favorite books in both categories.

Romcom is my favourite genre, so, of course it is stage in the person of Lucy Parker that does it for me… and it doesn’t hurt that Lily Lamprey is my, “book girlfriend” (if I ignore her voice).

My vote is for stage. The poll is fun! I love Lucy Parker’s London Celebrities Series that you mentioned and am anxiously awaiting book 6, Charlies story. Love’s a Stage by Laura London is another favorite with Miss Frances Atherton, fresh from the country, pretending to be an actress and Lord Landry, a famous playwright. There’s even a hot air balloon ride.

You’ve mentioned all the ones I’ve read and enjoyed, so I don’t have any titles that come to mind right now. As for whether I like Stage or Screen, I guess I’d say stage, but honestly, I don’t really go to either. it’s been years, well before COVID, since I’ve been in a movie theater, and I’ve only watched a handful of movies in the past three years. I don’t watch TV shows anymore, either. We were season ticket holders for several years for the Broadway on Tour series and really enjoyed it. The last few years, however, we switched to being season ticket holders to the North Carolina Ballet, which I’ve also really enjoyed. I haven’t seen any non-musical plays in years, but I have enjoyed them in the past. So I guess, at this point in my life, I would say the stage is more appealing than the screen.

My shift from watching TV shows to not watching was very abrupt. At the beginning of the shutdown I realized I’d simply stopped enjoying TV. I started reading more and picked up audiobooks again after a few years of not having the time to listen. The switch back to visual media could happen just as abruptly. Who knows?

You know, it’s interesting – for a while now I’ve been finding I can still immerse in a stage production when films aren’t capturing my attention the same way. I can sit through a 1+ hour act of Hamilton and the intermission almost surprises me, but if I’m watching a movie, or even a longer TV show, I need to knit or fold clothes or something because it doesn’t hold my attention. Could be the environment – I haven’t been to a movie theater in years. But live theater really is a special vibe.

I haven’t been to the cinema in quite a while. I love it, but it’s got so expensive now, and sadly, so many patrons seem to think they’re at home in their front room, and carry on conversations, using their phones and unwrapping very noisy sweets while the film is on that I prefer to wait for it to come to a streaming service! Of course, by the time that happens, I’ve usually forgotten all about the film anyway! Expense is a problem with theatre, too; I went to see Moulin Rouge (the musical) with one of my daughters recently, and it was great. But even with tickets at the cheaper end, plus train tickets to London and back, and the price of a coffee and sandwich, and there wasn’t much left of £200 between us.

Cost is one of the reasons we decided to switch to ballet season tickets from the Broadway series. It’s also nice to support local cultural arts, and fun to get to “know” the dancers over the years.

I also tend to forget which movies I wanted to see by the time they are available to stream. We didn’t ever go to movies much due to the expense, preferring to rent the movies then livestream when that started. Now I’m so out of the habit I rarely bother to keep track of movies.

You’ve described that very well. I can’t just sit and watch TV, I always have something to do, or if not then I have solitare on my tablet or something like for when I get antsy, which I almost always do. And I feel as you the same when we’re at a musical or the ballet. The time passes quickly and I’m surprised when it’s over.

His Lordship’s Mistress is one of my favorite romances of all time. I have reread it over the years and it never fails me. Thus, my vote is the stage.

I recently listened to a book called Silent Sin by EJ Russell (I reviewed it for AudioGals) which is, as the title implies, set in the early days of cinema. The author has really done her homework about the studio system and how its stars were controlled etc. and the romance – between a mid-list star and his driver – is really sweet. The narration – by Greg Boudreaux – is superb, and I highly recommend it.

Susan Elizabeth Phillips does the screen well, I think. Glitter Baby feels accurate even more than 30 years after it was written and Honey Moon is strong in its depiction of the dangers of fame on the silver screen as well.