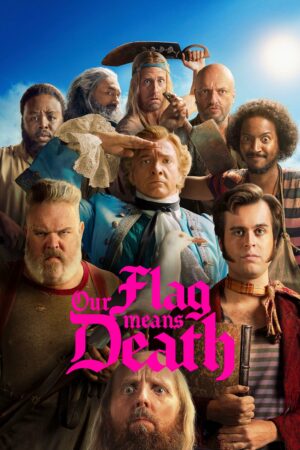 The buzziest romance show streaming this spring turned out not to be season 2 of Bridgerton, but HBO Max’s pirate comedy Our Flag Means Death (you can watch the trailer on HBO’s site here). OFMD stars Rhys Darby as the foppish and massively unqualified “Gentleman Pirate” Stede Bonnet  and Taika Waititi as the legendary Blackbeard (Edward Teach, or ‘Ed’ to Stede). Along with a crew of generally incompetent misfits, the two men misadventure their way across the 1700s Caribbean, and find themselves in the most unlikely of opposites-attract romances.

The show has been praised for its inclusivity. It rejects the common TV practice of queerbaiting, and actually allows Stede and Ed to explicitly fall in love. I watched with my husband, and when we hit the episode where Ed kisses Stede – well, I’d never heard a grown man squee before. (I told him I was mentioning that in my blog post and he was indignant. “I have,” he insisted, “TOTALLY squeed before.”) OFMD actually showcases multiple queer love stories – in addition to Stede and Ed’s romance, two of the crew are in a male/male relationship, and a further relationship involves a male pirate and a nonbinary pirate. The cast is also racially and ethnically diverse.

But beyond that, it’s also a great ride. Alternately hilarious and heartbreaking, the ten episodes of OFMD are simply the strongest and most impactful television I’ve seen this year.

As of the moment, OFMD has not been renewed for a second season, so where can fans go for more? There is, of course, a robust world of fanfic. But Romancelandia also has something to offer! There are gay pirate romances out there, but unfortunately we haven’t reviewed them so I can’t speak to their quality. But there are some great queer books which capture a lot of what makes OFMD special, and I wanted to share some of them here.

The Gentleman’s Guide to Vice and Virtue/ The Lady’s Guide to Petticoats and Piracy by Mackenzi Lee. The Montague Siblings series is YA, so the heat level is low, but it shares the action/adventure element and has diverse pairings. The first book is male/male and the second (with more pirating) is f/f.

If you liked OFMD’s shipboard romance and 1700s ocean setting:

False Colors and Captain’s Surrender by Alex Beecroft. These books feature British Navy protagonists, not pirates. Beecroft has also written a book called Contraband Hearts, which deals with smugglers and may be more pirate-y.

If you want to see a Georgian aristocrat and a thief:

The Queer Principles of Kit Webb by Cat Sebastian. The shining secondary cast is worthy of being connected to the great pirates of OFMD. On the other hand, if OFMD’s cliffhanger ending has left you feeling unresolved, this book may not help, as there are several unfinished plot threads.

If you want to see another pairing of an ‘oaf’ and a dandy:

The Labors of Lord Perry Cavendish by Joanna Chambers. Also for fans of OFMD’s honesty about self-esteem issues, and scenes featuring naked sketching.

And if you want something uncategorizable that still gives OFMD vibes:

Alexis Hall’s Prosperity. We don’t have a review of this yet, but I’m halfway through reading it. It’s got a great crew of queer misfits on a pirate-y steampunk airship, with a diverse cast (including a nonbinary character). Bonus points for having an actual kraken.

What about you all? Are you watching/have you watched Our Flag Means Death, and did you love it as much as I did? Can you recommend anything that might appeal to the viewers of a queer historical pirate romantic comedy?

I saw this blog post and checked it out with my SO at the time. He wasn’t impressed with the first couple of episodes (despite my thinking as a Monty Python fan he’d love it). Had the house to myself this weekend and finished the entire first season. I thought it was really well done!

So glad it is going to have a second season.

In clearing out my house I discovered a copy of Sharon & Tom Curtis’ The Windflower. Still haven’t read it, but I did look up reviews. One of them had a quote from the book that I think may relate to OFMD and Blackbeard. When Merry (the heroine) first sees the pirate Rand Morgan (not the hero): “His long hair was midnight black, thick and unruly on his brow, and of the same hue as his silk shirt. There was an aura about him — an air of the craftsman, one whose mastery of certain skills made him indifferent to the judgments of the uninitiated. That is what frightened Merry the most— his indifference. He didn’t look evil, only as if he did not care. If she had seen him on the street, she would have known he was not like other men. She wondered if this magnetism had been there and had forced him into a life of piracy, or if it had come to him as a mantle of the reputation he had gained.”

Caroline, I watched the first episode of OFMD, and thought it was fine but it seemed stuck on the one joke of this motley crew having a really incompetent, upper crust pirate captain. After reading your post, I’m wondering if it gets better as it goes along? Sounds like Blackbeard definitely adds complexity and interest.

Yes, it gets better with every episode! Blackbeard doesn’t arrive in force until Ep 4 (we do see him in brief moments), and everything after 4 is golden, but there is still good stuff in 2-3. They run into indigenous Pacific Islanders and a British navy crew, we get Stede’s background and more info about Jim, and Leslie Jones shows up as a pirate bar owner. It’s all terrific.

Ok, you had me at Leslie Jones. I’m in! Thanks!

I’ve read False Colors and it’s a solidly researched historical romance. The characters and the conflict are strong, and the historical detail accurate. I think she’s an underrated mm author.

I’ve read a couple of the Winterbourne books but not The Labours of Lord Peter Cavendish. I love Joanna Chamber’s writing and this has been on my TBR list for a while now.

I’ve never heard of Prosperity by Hall, so off to look that one up. Thanks.

Nick Boulton narrates that one :)