Are You Now Or Have You Ever Been Japanese American? 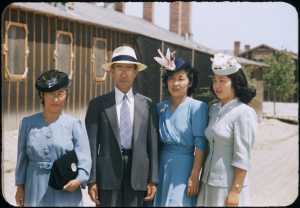 Today we feature something a little different. A friend of mine, Eric Muller, has created a podcast I think is wonderful. It’s called Scapegoat Cities and features human stories behind the Japanese American Internment. I asked Eric if any of his stories featured love affairs. The most recent one, Are You Now or Have You Ever Been Japanese American?, (kinda) does. I loved the podcast and I think you will too. But first, here’s a bit about Eric and his work.

Dabney: Give me some background here. How did you get interested in the internment?

Eric: I’m a professor at UNC Chapel Hill, in the law school, and have been studying and writing about the mass removal and imprisonment of Japanese Americans for the past 20 years. I first began learning about this historical episode when I lived and taught in Wyoming, which was the site of one of the ten camps where Japanese Americans were locked up during the war. I began to study that camp in order to bring the history into the classroom and make it more real and relatable to my students, but quickly found myself more and more absorbed by the larger story of how the government identified people of Japanese ancestry as an internal enemy for no reason other than their ancestry. This touched me deeply not only as an American committed to civil rights, but also as the son of a German Jewish refugee from the Nazis. While the persecution of Japanese Americans was in many important ways quite different from the persecution of Jews in Germany, the two stories share the same basic engine — identifying a whole group of people as a foreign, enemy body on the basis of who they were rather than anything they’d done.

Dabney: What research have you done for your podcasts?

Eric: I’ve spent two decades digging deep into government records in the National Archives for my books and articles. While doing my research I’ve come across countless touching stories of the real, bitter impacts that this mass racial scapegoating had on the lives of ordinary people. Because they’ve been somewhat tangential to the topics I’ve researched, I have not incorporated them into my published work.

Dabney: You’ve published articles, chapters, and even a gorgeous book on the Internment. Why a podcast?

Eric: Given the current national climate, when religion and national origin again seem to be serving as proxies for danger to our national security, I decided that I wanted to bring some of the stories out of their dusty archives boxes and into the light. It’s easy to forget that abstract government policies can have real, devastating impacts on human lives. My goal with this podcast is to remind listeners of what those impacts can be — how they can turn innocent lives upside down in countless ways.

Dabney: What are your goals for this podcast?

Eric: The podcast format lends itself beautifully to storytelling. Each episode is a single story, based on real historical facts, lasting about 15 minutes. The stories are personal and sometimes raw and painful, but they show more than just suffering: they show Japanese Americans finding an inner resilience and taking steps to protect their dignity.

Dabney: Tell me about your most recent podcast.

Eric: The story that just came out this week is called Are You Now or Have You Ever Been Japanese American. It tells the story of a Japanese American woman named Mary Manbo, a wife and a mother of a toddler in camp, as well as an outstanding clothing designer and dressmaker. In early 1943, when the government forced everyone in the camps to fill out a questionnaire about whether they were loyal to the United States, Mary Manbo decided she had had enough, and bristled in her answers to the questions. Those answers got her in some hot water. The story simultaneously illustrates how devastating her barrack life was to her home life and her relationship with her husband — how the lack of privacy robbed the couple of intimacy — and how in the end she showed resiliency not just in her answers to the loyalty questions but in her reclaiming of some shreds of privacy and intimacy in her personal life.

Dabney: Thanks for talking to me, Eric. Your work is so impressive–I’m so happy I can share it.

In the spring of 1942 the federal government imprisoned every person of Japanese ancestry on suspicion of disloyalty.  The general who ordered the action said that it was necessary because it was impossible to distinguish a loyal from a disloyal Japanese American.

A year later, the government turned 180 degrees and announced that it could determine the loyalties of Japanese Americans and was going to do so by having the imprisoned people fill out a questionnaire.

This episode of Scapegoat Cities tells the story of how one woman, Mary Manbo (pictured above with her parents and sister), responded to the interrogation.

Mary Manbo’s questionnaire and the transcript of her loyalty hearing survive in the National Archives, and this episode is drawn directly from her answers, as well as some additional research into her family’s story.  If you’d like to know more about the Manbo family’s experience of removal and imprisonment, check out my essay Outside the Frame: Bill Manbo’s Color Photographs in Context in the book Colors of Confinement: Rare Kodachrome Photographs of Japanese American Incarceration in World War II.  The book showcases more than sixty of Bill Manbo’s beautiful photographs of life behind barbed wire at the Heart Mountain Relocation Center.

Japanese-American history on Hawaii is interesting. Some of the Japanese-Americans born on the island fought for the right to fight in WW2 and eventually fought in the European theatre (e.g., the highly decorated 42nd Infantry Regiment). I remember reading about this in Michener’s novel, Hawaii.

The reason Japanese Americans were not interned in Hawaii was because there were too many of them on the island, which plainly shows that the internment of Japanese Americans on the mainland was racist and not a military necessity considering Hawaii was closer in proximity to Japan, and would likely have more “disloyal” Japanese.

I agree – that’s why I wanted to raise the point. Showcasing the fact that enormous numbers of Japanese Americans remained free and never caused the slightest security risk exposes the justification for internment as the fearmongering racism that it was. If we leave the uninterned out of the conversation. we leave history vulnerable to revisionists declaring “Well, it was terrible, but it worked, didn’t it?” It worked about as well as the legendary tiger repellent – anything is effective against a nonexistent threat.

I also have a historian’s interest in the 442nd, the most decorated combat unit in US history. It was composed of Japanese Americans, and the dynamics of mainland vs Hawaiian troops were important in the unit’s formation. Recognizing diversity within Asian communities is rarely done, and this is a particularly historically relevant distinction.