If I had to sum up 2016 in a sentence, I’d say it was the year I overestimated myself. It wasn’t a bad year, but as my life got busier, I kept thinking I could still juggle work, reading, and writing as easily as I used to. When I started to get this list together, my thoughts for every entry went something like, “This book! Oh, it was so good! I loved it when I read it back in… back in… huh. I don’t even remember when I read it.” Usually I can tell you exactly when I read my favorite books for the first time, but this year was too crazy for me to keep track of. Between a new job to preparing for graduate school, it’s a wonder I had time to read at all! But I did, and here’s what I loved:

I haven’t gotten the chance to convince all of my friends to read this yet, but it’s on my 2017 to-do list – as is the next book by Sally Thorne! I love enemies-to-lovers books, perhaps because teasing and needling is a big part of how my family and friends operate. Josh and Lucy are co-workers at a publishing house, and the tension and chemistry between them rather burns up the page (or the eReader, rather, if you’re like me and haven’t the arm strength to cart around all the books you read in a day.) It’s positively delicious to see the veneer of enmity slip away to reveal how much Lucy and Josh already love each other. Sally Thorne’s writing felt so perfect, she choreographed the book just so, that it felt like something a bit better than reality to me.  A/BN/iB/K

It feels like I’ve had Kristen Callihan’s books on my DIK shelf for forever, but thinking back I’ve realized I was only introduced to her books in January of 2016. In less than a year I’ve become a major fan, to the point that I would easily consider Idol one of my favorite 2016 books. This is a Rockstar romance about Killian St. James, a famous rock star who falls for quiet Liberty Bell while hiding away from the world after things went south with his band. When he finally heads back to the spotlight he drags Libby with him, helping her to gather a little courage and become the singer she so clearly has the talent to be. Although it seems like this should be Killian’s book, because he’s the rock star, it’s Libby and her journey which consumes the story.  A/BN/iB/K 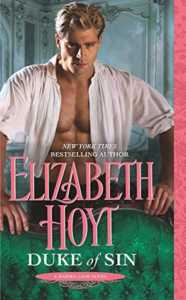 Duke of Sin by Elizabeth Hoyt

Books about true villains are hard to write, I’d imagine, because it’s too easy for them to slip into reformed-rake territory, which is an entirely different plot altogether. Elizabeth Hoyt managed this difficult task with Valentine Napier in Duke of Sin, a true villain of a hero if I ever saw one. Through the whole book I kept expecting Valentine to suddenly go soft, transformed by the love of Bridget Crumb. Yet it didn’t happen. I don’t mean that he was a detestable hero—rather the opposite, in fact. He was complex, and Ms. Hoyt managed to stay true to that piece of his character even as he fell in love.

I’m not generally one for books about royalty, but anything by Emma Chase is an auto-buy for me, and I haven’t regretted it yet. Royally Screwed is the quintessential Cinderella story, as Prince Nicholas of Wessco falls in love with Olivia Hammond of New York City. Neither Nicholas nor Olivia intends to have anything more than a summer fling, but something about them just clicks. As a reader you can feel it from page one, and it kept me hooked to the end.  A/BN/iB/K

Is it possible to describe how thrilled I am by Ms. Kleypas’ return to historicals? Maybe not, but Marrying Winterborne is a perfect example of why I missed her so much. Rhys Winterborne is a self-made man from Wales who’s well-known for his luxury department store, Winterborne’s. His engagement to the sweet, almost ethereal Helen Ravenel was called off at the end of the prior book in this series, and poor Rhys doesn’t know what to do about it. Luckily, quiet Helen has lately decided to stand up for what she wants in life, rather than just going along with the plans of her well-meaning family. This is Ms. Kleypas at her best, and I’m now eagerly anticipating the next addition to the series.  A/BN/iB/K 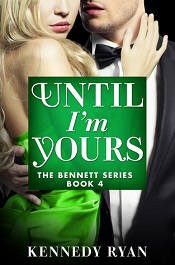 Until I’m Yours by Kennedy Ryan

Kennedy Ryan is another new author I discovered in late 2016, but I quickly burned through her backlist. Until I’m Yours is her recent story about model Sofie Baston and corporate philanthropist Trevor Bishop. The two couldn’t seem more ill-suited—Sofie is a model the world sees as frivolous, while Trevor is a powerful entrepreneur with a strong set of morals out to change the world for the better. Yet for all that Sofie tries to push him away for the sake of his public image, Trevor stays by her, seeing something in her that he hasn’t found in even the most “do-gooder” of his past girlfriends. Although it takes a little while to see, these two are perfect together, and definitely deserve a spot on your DIK list. 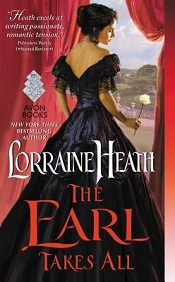 The Earl Takes All by Lorraine Heath

Love doesn’t get more forbidden than your twin brother’s wife – especially not when you’ve complicated matters by pretending to be your twin brother. The Earl Takes All is a challenging story to reconcile yourself to, but after reading Caz’s review I decided to give it a shot. While the plot could easily have seemed dreadfully tacky or unbelievable, Ms. Heath skillfully pulled it off. Edward Alcott, who falls for his twin brother’s wife Julia, shows remarkable character growth over the course of the story, which is the key to this book’s Best of 2016 status. By the time anything happens between Edward and Julia, you’ve come to love, appreciate, and understand them—that’s not to say their relationship is easy or comfortable for the reader, but it was certainly one I couldn’t put down!

The Devil You Know by Jo Goodman

One of the things I love about the romance genre is its ability to probe at the human spirit while still achieving a light-hearted manner. I’m able to walk through the dark sides of some characters knowing there’s a happy ending waiting for me, dangling like a carrot. The Devil You Know isn’t terribly dark, but its hero, Israel McKenna, certainly struggles with the darker side of his character. A recently reformed swindler who lost his memory after a fight, Israel spends much of the book untangling his memories and trying to find a way to move forward with his life after the crimes of his past.  A/BN/iB/K

Nalini Singh’s Rock Wedding is another book with a hero full of regrets. Abe Bellamy went into a downward spiral for years after his little sister’s death, and in the process he managed to hurt the one person who brought him a little light—his wife, Sarah Smith. Now he’s trying to make amends and, if possible, find a way back into Sarah’s life. There’s a lot of emotional debris to sort through here, and Ms. Singh might have you a bit teary as it all gets cleared. But it’s my opinion that only the best books have the power to make you cry, so I’d definitely recommend picking this up.

Duke of My Heart by Kelly Bowen

I have to confess to reading this in 2017, although it was a 2016 release. It kept slipping down on my ever-growing TBR pile, until I saw everyone else from AAR was putting it on their Best Of lists. I picked it up, doubtful it would make its way onto my own Best Of 2016 so late in the game… but here we are. It took me less than a day to read this, because I just couldn’t let go of the sharp intelligence of Ms. Bowen’s characters. Ivory Moore’s problem-solving agency, Chegarre & Associates, is fully of witty employees with agile minds who solve all sorts of problems for members of the ton. The Duke of Alderidge, though he hates to admit it, is one such person. His missing sister – and the earl found dead in her room – present an enticing mystery which is woven through the story as the duke and Ivory fall for each other. This book had me hooked until the very last page, and thoroughly deserves its place as one of the best books of 2016.  A/BN/iB/K

Nalini singh is one of my all time favourite authors and i loved this series! ! i really enjoy reading your romance reviews. it always helps me find my next read.

check out my newly launched book blog at leenasbookcorner.blogspot.com

i am a newbie book blogger so support by following and reading will be greatly appreciated!

happy reading and keep up the great reviews and recommendations:)

Some of these are right up there for me, especially The Hating Game. I am so eager to see how she follows up on such a wonderful debut novel. I forgot that Jo Goodman’s _The Devil You Know_ was from 2016, but I enjoyed that one a lot as well. Lorraine Heath’s _The Earl Takes All_ is on my radar and I’ve read lots of good things about it.

_Duke of Sin_ though was a big letdown for me, as was _Marrying Winterbourne_. And Emma Chase and Nalini Singh are both authors that do not work for me, though I have tried.

Great list. I think I found the reviewer whose tastes align close to mine. Yay! I’ve read and loved a lot of these, have most of the rest TBR and I’m adding the ones I don’t have :)

Will there be an annual poll this year?

Yes, I’ve been wondering that as well, especially now that we’re almost in March.

I am working on that today!