Why you don’t have to like sports to love them (or sports romance!) by Sara Rider

One of my earliest childhood sports memories is the day I found out my dad was taking my brother to watch the Winnipeg Jets. Without me. To say I was jealous would be a massive understatement, and, as my parents love to remind me, I pitched a fit. The decision to leave me out had nothing to do with sexism. My parents had always supported my love of sports. They signed me up to play on the local boy’s hockey team and my dad coached my soccer team for years. But unlike my non-hockey playing brother, I’d never shown any interest in actually watching sports. I only wanted to play them.

Needless to say, the story ends with my dad bringing seven-year-old me to the next home game. I don’t remember who won and I’m pretty sure I complained about being tired by the end of the third period, though I do remember developing a massive crush on Dale Hawerchuk. But what really stuck with me all these years was being in that arena full of people cheering for the same team. Jets fans are notably passionate, but there was an indescribable feeling of community and excitement that captivated me.

As I’ve grown older, I’ve retired my cleats and developed a newfound appreciation for watching sports. But it’s not the fantasy leagues or batting averages or even the incredible hotness of professional athletes that inspires me as a romance writer. It’s the stories of courage, resilience and passion that resonate far beyond the stadium walls. You don’t have to be a sports fan to recognize and celebrate Simone Manuel’s historic achievement at the 2016 Olympics as the first black swimmer from the US to win gold. And it’s impossible not to fall in love with the underdog story of the Icelandic national soccer team beating some of the greats at Euro 2016, despite the fact the tiny nation’s team consisted largely of semi-pro players, and an assistant coach whose primary occupation was dentistry.

Sports also provide an amazing way to foster community. When my husband and I moved to a new town six years ago for work, we were invited by one of his colleagues to watch an NFL game. Not having grown up in football country, it was a strange experience. The screaming! The cheering! The giant bowl of cheese dip! To this day, I still don’t have a single clue about the rules of how American football works, but I discovered I really love watching it. Not because of the game itself, though I will cheer like mad every time a Seahawks player catches the ball and runs toward the end zone, but because I met some of my dearest friends through these weekend rituals. And, of course, because of the cheese dip.

This idea that there are many different reasons and ways to love sports is part of what inspired the opening scene in my book Going for the Goal. Jillian and Nick first meet when they get stuck in a stairwell at a party—something based on a true story, but I’ll save that for another post! They bond over a discussion about NHL trade prospects and it’s clear that while Jillian has never donned a pair of skates, the aspiring sports agent’s love for hockey is no way lesser that the emerging NHL star’s. When they reconnect almost a decade later, both have found a way to dedicate their lives to the sport they love in very different ways. And, since this is a romance after all, they find themselves in need each other to advance their careers, but their pesky, long-simmering mutual attraction could jeopardize everything they’ve worked for.

Like all sports romances, Going for the Goal isn’t really about the sport itself. It’s about loyalty, resilience and determination. Most importantly, it’s a love story about two people who are too busy trying to take care of everyone else around them to see that they are perfect for each other. So even if you consider yourself a person that doesn’t like sports, you may find still something to love in them—even if it is just the cheese dip. 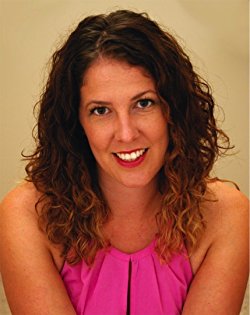 Growing up, Sara Rider dreamed of becoming a professional soccer player. When that dream was squashed by her extreme dislike of running, she decided to do the next best thing: write about professional soccer players. By day, Sara spends her time working in the field of research ethics and daydreams about plotlines and character arcs. She spends far too much time at public libraries and never leaves the house without a paperback or an e-reader stuffed into her purse.

Two of my favorite sports romances are See Jane Score by Rachel Gibson (mostly because of the funny column the heroine writes) and Tigers and Devils by Sean Kennedy,

I love that whole series by Rachel Gibson. I haven’t read the Kennedy. I’ll check it out. Thanks!

I love sports romances, even more so when women are the professional athletes. But I don’t see as many of those, unfortunately.

And the one’s I’ve read have them plagued with self-doubt and insecurity. Such a bummer!

Exactly! Where are the female athletes in romance writing?

I did a blog post on female athletes about a year and a half ago. You might find some recommendations there. Since then, I’d add Offensive Behavior by Ainslie Paton (former Olympic-caliber gymnast, now in her late twenties) to the list.

I find myself gravitating more and more and more to sports romances – even finding myself craving books about sports I generally hate because I’d love to get an inside glimpse of those worlds! (You could not pay me money to watch a whole cricket match, but I would probably auto-buy a book about a batsman…) There’s something about the camaraderie of a team, the determination of professional athletes, and the incredible array of circumstances that surrounds the machine of professional athletes that just lends to some excellent storytelling. Would absolutely love more books about Olympians, as well!

(And, for the record, am quite looking forward to Going for the Goal!)

I’m also auto-buying the cricket book. The girlfriends/wives are ripe for romantic fiction. That sounds weird and pervy – I don’t mean it that way. But come on! Jemima Khan!

I’ll pretty much read about any sport and I’m not picky about straight or queer principals. I love the locker room banter, the realistic body descriptions (these are fit & athletic people!), the romance, the intensity…When it’s done well, it’s just so satisfying. I’m a sucker for hockey players (my first date with my husband was to a Washington Capitals hockey match when I was 15 years old! I’m 43 – we’re watching the Caps on TV right now!), but I’ve become a newish fan of rugby & football (American) after reading so many terrific books featuring these sports.

I hope the trend continues & that more contemporary authors write stories in this genre. You can keep your rockers & billionaires, I’ll take my athletes any day!

I’m a huge fan of some sports romance, hockey, baseball and some football and a keen watcher and follower of the sports themselves. What’s really important though is the author know her sport. I’ve read a couple where it was very clear the author didn’t know the sport at all and the errors were so grievous that I couldn’t read any more books by the author.
I do agree that the main appeal is the romance aspect so put the two together and as long as there are no glaring errors then yep, you don’t have to be a real sports fan to enjoy sports romance

I totally agree about knowing the sport. I admit to reading romances about sports I don’t know as much about but if I read a book about soccer, major errors will totally take me out of the book.

I love sports too and appreciate the Olympians who never have a chance of winning a medal but are there for the joy of competing and meeting others who love sports too.

I like sports but I realize that the ones I love are not highly valued in society. For instance, I compete in equestrian dressage, which is almost never featured in romances. My 13-year old niece competes in dog agility on an agility team with our corgis and I go to all of her events and love them. Growing up I was a devoted ice skater. I think it would be nice if romance writing let in other sports besides the typical ones defined by masculinity.

I’m assuming you know Elizabeth Lowell’s Remember Summer? It’s the only equestrian romance I can think of off the top of my head.