Writing about love in a world ravaged by zombies: A guest post by Lee Sutherland

Hello, AAR! I’m here today to talk about romance, the apocalypse, and what it’s like to be a male writing in a field dominated and consumed by women. It’s an exciting opportunity for me to share my thoughts with you, so why don’t we get right down to it.

Whenever I tell people that I write romance novels, I almost always get the same reaction: a smile, a laugh, and then a ‘you’re kidding, right,’ followed by an immense amount of intrigue. They find it so hard to believe that I, a young (29), tattooed male, who looks like he belongs in a band, spends his days writing about love, sex, and emotions. I don’t necessarily think it is any harder being a male who writes romance, but I think women are usually more drawn to female writers because they at least know the writing is coming from a similar experience. I’ve always felt in touch with my feelings, even though in large part there is a stigma against men being vulnerable. This helps me to craft stories that have as much heart and soul as action and adventure.

When I was a young boy, I never would have thought that I would write a romance novel, let alone three. I write post-apocalyptic romance, where my characters attempt to find love in a world ravaged by zombies. The first novel in the series, Undead Love, centers around Rus, a loner-widower, and Polly, a badass, independent woman with more walls than Donald Trump could ever dream of building. The idea for the story came from my love for The Walking Dead. I wondered what it would be like to take the danger, suspense, and zombies and include them in a character-driven, romantic plot. The reason that The Walking Dead is so successful is because of the characters. It’s not just a blood and gore fest, it’s about real people with real problems just trying to survive. For me, I never thought love would die out in the apocalypse. When the world ends, love will be more important than ever, because it is one of the things that separates the living from the dead. That’s what I wanted to show in my novels.

The thing that drew me to apocalyptic stories, and subsequently led to me to write Undead Love, was my 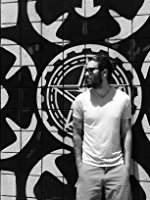 curiosity of how life goes on once civilization collapses. I grew up in the south, where people farmed and hunted. There are more than a fair share of southerners who could fend for themselves in such terrible times. I never questioned if there would be survivors, the part that appealed to me is what they would do in their downtime. More specifically, what would their relationships be like and is humanity without laws and society inherently good or evil? Undead Love: Not Alone, the second book in the series, definitely takes a look at the darker side.

Lee Sutherland dwells on the edge of reality and imagination, writing dark, sexy stories set in a terrible future. His most recent book is Not Alone.

I write zompoc romance too!! Off to check out your books!