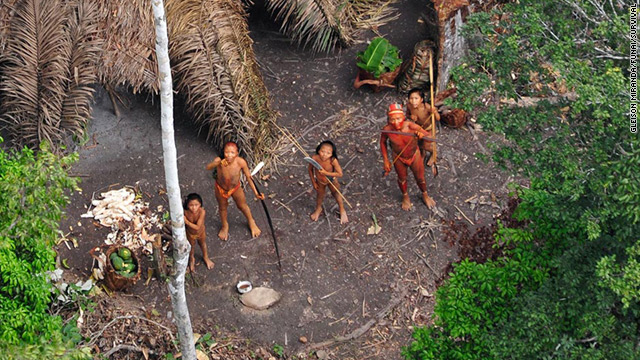 With this picture, an indigenous rights organization in Brazil hopes to give attention to the rights — and future — of “uncontacted” tribes:  groups that have little to no interaction with the outside world.

Maybe this is because I’m an International Communications major (which carries a strong anthropological element in some courses), but I find this fascinating.  It’s hard to imagine that there are still places in the world that are untouched, so to speak, and live pretty much unaware of what is happening in the rest of the world.  Most of even the smallest villages in Africa have contact with the “outside,” but according to CNN there are about 100 tribes, 50ish of which are located in the Amazon, that are “uncontacted.”

Whether or not we should contact them is debatable.  I do have to admit, though, it provides an incredible anthropological opportunity to study a society and culture that is, for lack of a better word, pure — it hasn’t been influenced by or mixed with other cultures.  This is utterly fascinating to me.

I don’t know if anyone else is interested in this sort of thing, but if you are, I’d be interested to hear what you think.

I’m absolutely certain that we should not contact them.
If you look at what happened to all the cultures who have been contacted, it’s usually a disaster for the contacted ones. Especially if there is such a huge difference in culture. I’m not sure we can give them anything worth having at all (at least not fromn their perspective) and the danger of them losing everything is far too great.
And while I can understand the scientfic curiousity about wanting to study alien cultures, as far as I know every observation also changes the dynamics of the situation and influences the observed, so what we would learn would not be the real culture or life of these people anyway.

What a conundrum. I honestly can’t say what would be best. It not like the world is going to adopt them and provide them with everything they need to move into the 21st century. And by contacting them you do change them. But there is so much that could make their lives easier.