I still haven’t been able to work on writing, but I have done things towards advancing my career. Which, if I’m ever able to finish writing another book, will probably be a good thing.

Last month I went to Reno, Nevada for the Romance Writers of America’s annual National Conference. I coordinated the day-long Beau Monde Conference also, which featured a keynote by Mary Balogh and twelve totally informative workshops on Regency life and writing. Unfortunately, because I was busy chasing down errant boxes and being stressed, I didn’t get to see anything. But I had a great time and got the workshop materials, so that was okay.

I attended many of the National workshops, most of which added some kernels of useful information to my rapidly expanding writer’s toolbox. The two best workshops, to my mind, were Gayle Callen’s revisions discussion and Julia Ross’s talk on how to write “Heroes To Die For.” I came away with ideas for my WIP and, most importantly, ways to implement them.

What the Conference is for me, though, is a chance to see people I only get to see once a year at this event. It’s solitary work being both a stay-at-home mom and a writer, and I do get lonely. In Reno, I got to hang out with other smart, romance-loving women who wrote. I wouldn’t quote a credit card ad and say it was priceless, but it was fantastic. I also got to wear some of my grandmother’s vintage gowns, and that was cool, too. Like a lot of other people, I was appalled by the closing Awards show, but I clapped extra hard for people I knew or people who were in my various chapters and I did my best to ignore the incredibly inappropriate show content, at least while it was happening. Here’s me in one of my grandmother’s dresses:

While in Reno, I hung out with some other Regency authors and we’ve banded together to produce a blog,Risky Regencies. We plan to discuss writing, life, Regencies, life, and more Regencies. I’ve also noticed an increase in traffic to my own Writer’s Diary, and I hope that means at least some of the visitors enjoy my writing voice. 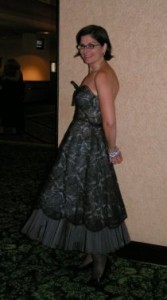 When I returned, I signed up to attend the New Jersey Romance Writers’ Conference. Since the Conference happens just days after my book is officially released, I’ll also be signing books at their bookfair. I ordered 15 copies and I am hoping I’ll be able to sell the bulk of them. That will be very exciting. I will also get to hang out with more romance writers, including my good pal Myretta Robens, whom I talk to at least once a week (thanks, AAR!).

Having said all that, however, I suppose I should mention the current book, the mommy-lit on which I’ve been slaving (or at least thinking about slaving over) all summer. It’s at 75,000 words, it’ll probably be up to about 85,000 by the time I’m done with the first draft. I think that’ll be by the end of August, because if it isn’t, I’ll have some serious issues with myself (as if I don’t already). Then I’ll let it rest, sorta like a soufflé, for a week, then dive into revisions (thanks, Gayle Callen!). I think that’ll take two weeks, then a final pass-through and to my agent by the end of September.

And then we’ll see. Will I be a one-hit wonder, the Dead Or Alive (“You Spin Me Round (Like a Record)”) of the writing world? Or will I pull a U2 and break out of the box with my first book and build a career filled with variety and staying power? I’ve firmed up a five-year career goal, and I am trying to keep my eye on the prize as I try to carve out time to write. Give me a call in five years and we’ll see what I’ve managed to accomplish.

As always, thanks for reading, and thanks to AAR for giving me the opportunity.

Continue to the next page of Megan’s Journal

Return to the introduction to Megan’s Journal