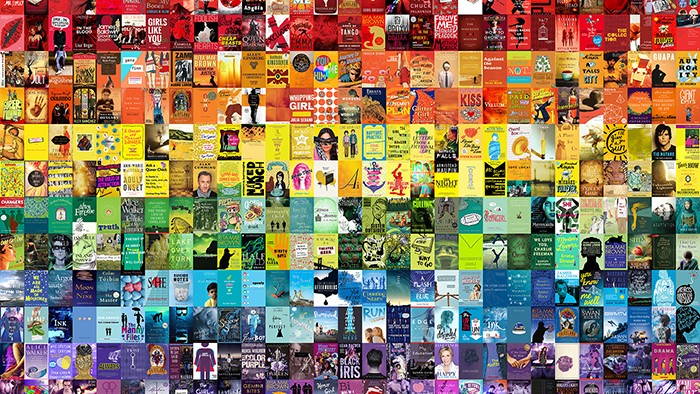 We’re rounding out Pride Month with another selection of our favourite queer love stories, all of them celebrating the truth that Love is Love is Love. And as ever, we’d love to hear from you about your favourites, so please drop by and tell us about the awesome queer romances YOU love.

I love Glitterland. The ultimate romance of opposites.

The Essex vernacular is most often commented on in this novel, but it is a vital component, and one I found very entertaining.

However, Alexis Hall’s accurate portrayal of depression is inspired especially juxtaposed with characters who are fizzy and full of life. The innocent wisdom of Darian is so adorable and undercuts any sense of Ash’s intellectual fustiness.

For me, the Essex accent heightens Darian’s vulnerability and innocence. I loved the class observations, sometimes you have to be obvious to make the right impact. The references to Roland Barthes and Shakespeare appealed to my inner literary snob, but we intellectual snobs are cut down to size by Darian’s pronunciation of ‘barf’ (bath), which is as it should be.

The author had been horrified when one of the LGBTQ community commented in the press that a UK reality star ‘Rylan’, was ‘too gay’. Glitterland’s ‘Darian’ feels like Alexis Hall’s defence of ‘Rylan’. Glitterland made me feel fab-u-lous dahling, and for me, it is ‘totes amaze-balls!’

Squared Away by Annabeth Albert (narrated by Greg Boudreaux)

I recently listened to the audiobook of this title, and loved it; I think it’s one of the best of the author’s Out of Uniform series. When the parents of three very young children are killed in a car crash, their two uncles (well, one is an uncle, the other is a cousin of sorts) are both given guardianship owing to the conflicting wills made by the couple. The uncle – Mark Whitley – is a Navy SEAL and used to being in control and knowing exactly what’s what – but he has no experience with children, while “Unca Ike” (Isaiah James) has a bit of a reputation as a party boy. Mark isn’t best pleased when he returns from deployment to find Isaiah running things, and Isaiah isn’t wild about the fact that Mark is no help – but eventually they find a way to work together, as well as to explore the attraction that simmers between them. This is a ‘quiet’ story about two people working through their grief and learning how to move forward, to trust, grow as a person and as part of a family unit. It’s the first romance I’ve read in which one of the characters is demisexual (or Grey Ace) and Ms. Albert handles that aspect of the romance sensitively; Isaiah’s gentle acceptance and understanding of Mark’s frustration and guilt is beautifully done and the love scenes are sensual and tender, focusing strongly on the emotional connection between the two men.  If – like me – you’re an audiobook fan don’t miss this one; Greg Boudreaux is one of the finest narrators around, and his performance is superb.

Think of England by K.J. Charles

Part romance, part mystery and wholly wonderful, Think of England is my favorite K.J. Charles novel.  It’s England, 1904, and Captain Archie Curtis is trying to put his life back together after a terrible military accident two years ago.  Bitter and angry over the war and the end of his career, he’s determined to discover what really happened and whether or not it was an act of sabotage.  He gets the opportunity to investigate when he’s unexpectedly invited to a country house party.  Unfortunately, Archie is a terrible spy, and he almost immediately finds himself at odds with another guest, Daniel da Silvia, an actual spy undercover at the house party.  Daniel, a flamboyantly gay and effeminate Jewish poet, is initially dismissive of super starchy, homophobic Archie.  But circumstances – and their individual investigations – force the pair to work together.

As the novel progresses, it soon becomes clear that none of the guests is quite who or what they appear to be – including Archie and Daniel.  Archie is initially confused by his feelings for Daniel and denies his attraction to him, and Daniel is derisive of Archie’s awkward attempts to articulate what he’s feeling.  But their investigation – and the danger in being discovered, forces them together and slowly reveals the inherent goodness and kindness in them both.  The relationship evolves from antipathy to friendship and respect, and finally, to affection and love – and companionship.

The changing relationship between Daniel and Archie – adversarial and awkward and eventually tender and affectionate (still a bit awkward) – is supremely well done and a highlight of the novel, but there’s much to love about Think of England: the clever and twisty mystery plot; the large cast of secondary characters, including a charming lesbian couple who play a pivotal role in the climatic ending; and of course, Ms. Charles gift for witty, smart dialogue and her marvelous writing. Think of England is her best novel… so far.

Carry On by Rainbow Rowell

I reviewed this YA Fantasy for AAR and absolutely adored it. Simon and Baz are wizarding students and roommates at a school akin to Hogwarts. It’s very hard not to compare Simon and Baz’s story to Harry and Draco slash fanfiction, but really, Carry On is worth so much more than that. Rowell brings her signature heart and charm to the fantasy world (all the spells are common sayings, idioms, song titles, etc.) and the way Baz pines over Simon made my heart scrunch up in happy convulsions. It’s the kind of story you read where you just want to mush the character’s faces together to make them kiss because they can’t seem to see how perfect they are together, and even better, Rowell just announced there will be a sequel called Wayward Son in 2020.

I freely admit to occasionally being shallow and buying a book just because it has a gorgeous cover. It doesn’t always work out well, but in this case I found a hidden gem combining magical realism with the rich queer history of San Francisco. The characters are memorable, their situation both heartbreaking and hopeful. Read it for the lovely f/f romance, but also for the portrait of life as LGBT+ in San Francisco in 1940. Read it with Pride.

Autoboyography is the story of a gay high school senior who finds his temporary back-in-the-closet status challenged when he falls head over heels for a Mormon guy who must battle the fallout from his religion’s complete rejection of all but heterosexual love. (Review HERE.) . I could rave on for many paragraphs about this amazing book, but I honestly think that you have to read it to fully appreciate it. The writing is excellent. The characters are all three-dimensional and relatable. The topic is timely and relevant. The love story is sweet and yet heartrending. Up until the very last pages, I wasn’t quite sure how things would work out. I hold it up as a shining example of the quality that Young Adult literature – LGBTQ or straight – can achieve. I recommend it to anyone looking for a moving love story, a heartbreaking coming-of-age tale, or as the perfect window for anyone who doesn’t yet understand that love is love is love is love.

Simon vs. The Homo Sapiens Agenda by Becky Albertalli

Recently made into a successful movie starring the adorable Nick Robinson, the book that inspired Love, Simon is actually called Simon Vs. the Homo Sapiens Agenda, and it is simply delightful. Simon Spier is a high school junior who has come to terms with the fact that he’s gay, but he hasn’t found a way to tell his family and friends this critical bit of information about himself. His story as he grapples with the monumental decision of when he should come out of the closet (or if) and how he wants to go about it is heart breaking, especially when a vindictive student interferes with this highly personal life event. Author Becky Albertalli does an amazing job depicting what has to be the experience of so many LGBTQ+ young people in a sensitive, relatable way. I personally recommend reading the book first, but the movie is a must-see as well.

This was my first m/m story, and I’m so glad I débuted with Cat Sebastian. She gets the Regency era just right, and here, writes a true Beauty and the Beast story. (Review HERE.)

Lawrence Browne, the Earl of Radnor, thinks he is mad. The people in the village believe he is mad. In reality, he’s merely eccentric and a brilliant inventor and researcher. He has a touch of agoraphobia and an extreme shyness with people that makes him hide away in his disgusting, crumbling manor at Penkellis at the mercy of the handful of diehard servants.

Enter a handsome thief and confidence artist posing as a secretary. When he took up the post, little did Georgie Turner realize that Penkellis and Radnor would wake up a latent conscience and sense of duty in him. Of course, being wildly attracted to the large, gorgeous earl acts as a good prod to said conscience.

I loved how sensitively Sebastian handles the two men’s characters, their growing attraction, and how they open up to each other in all their vulnerability.

Wrong to Need You by Alisha Rai

I’m holding up this novel for positive bisexual representation. Sadia Ahmed is a widow who has anonymous encounters with men and women that don’t require explanation or commitment before she eventually ends up with her deceased husband’s brother. It’s a sex positive, emotional romance with strong characters and complicated family dynamics, the middle book in the Forbidden Hearts series.

History Is All You Left Me by Adam Silvera

I loved absolutely everything about this book. It’s the heartbreaking story of a teenaged boy grieving the tragic death of his first love, but lest you think it’s all doom and gloom, let me assure you that this story will give you plenty to smile about even as it wrecks you. The characters are smart, witty, and perceptive beyond their years, the kinds of people I want to know in real life and the story is engrossing from start to finish.

Oh my goodness! I just listened to the audio sample for Glitterland! If the rest of the book is as charming and delicious, I’m in for a treat!

A lot of damn good ones here, especially the Charles, Sebastian and Rai.

History Is All You Left Me is wonderful! And, Alexis Hall’s name keeps coming up. I think I’m going to have to check out his work soon.

You won’t regret it! His books are wonderful.